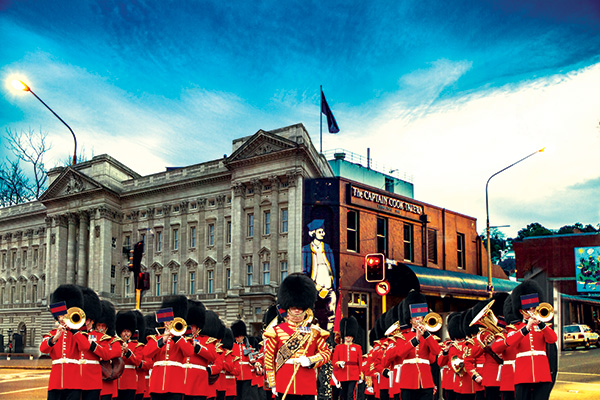 The Duke and Duchess of Cambridge’s recent visit to Dunedin has been revealed to be part of a wider push by the Monarchy to diversify their portfolio of investments abroad. A night of travel away from Baby George provided the Duke and Duchess with a bit of rest and relaxation in Dunedin, and an opportunity to assess the viability of the Monarchy’s future investment in the Cook, a property that was originally held by the Crown but lost in the 1800s.

It has been revealed the Cook was founded in 1860 by an uncle of Queen Victoria, who had come over by boat and opened the pub only to desert it a few years later in search of gold. The premises were then taken over by commoners, leaving a formal lease unclear as to who actually owned the property. As of late, the Monarchy has been investigating reclaiming Crown land in its colonies.

A source has indicated to Critic that the Duke and Duchess met with developers of the Cook site and were taken on a tour of the building early Sunday morning, prior to their appearance at St Paul’s Cathedral. The source was able to disclose that Prince William was particularly enthusiastic about the bar, saying it reminded him of his days at the University of St Andrew’s because of the “similar atmosphere,” and noted that “Granny would approve.”

The pub looks set to be open within a few months, with Re-O-Week earmarked for the royal reopening. New Zealand’s own international success story Lorde has been rumoured to be headlining the opening event at the royally refurbished venue after Six60 declined an offer to play, citing that it would be “forgetting your roots to see the Cook run by Poms.”

A manager is yet to be appointed, but Prince William indicated that staff would be on a “zero-hour contract,” not unlike the staff at Buckingham Palace. Critic consulted Wikipedia, which explained that a zero-hour contract creates an “on call” arrangement between employer and employee, and is particularly useful for people such as retirees and students who want occasional earnings and are able to be entirely flexible about when they work. Applications for positions at the Royal Cook will open 21 April and applicants should include a CV and certificate of lineage.