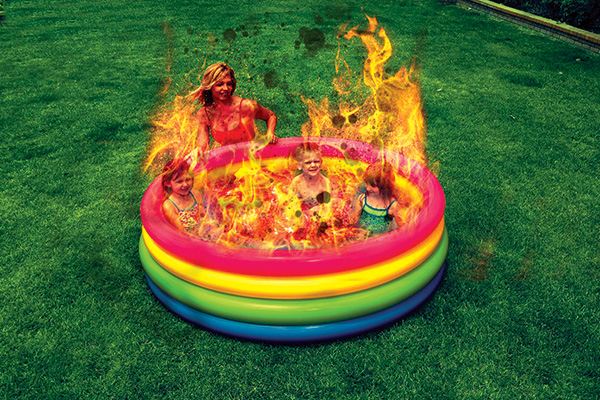 Dickie heats up over paddling pool of fire

The art of student couch-burning has reached new heights, according to the complaints of frustrated Woodhaugh resident Jeff Dickie. While walking his daughter to school through the Woodhaugh Gardens, Dickie was astonished to discover the remnants of a couch fire in the Gardens’ empty toddlers’ paddling pool that his daughter frequently uses.

Dickie indicated to the ODT that “people have clearly been partying up,” speaking of the broken glass, crushed cans and discarded clothing scattered through the charred remains.

The fire seems to have been started in the pool, cracking the plaster at the pool’s base, which will need to be repaired. The pool was drained of water at the time of the fire. Maddened by this discovery, Dickie promptly contacted the Vice-Chancellor so she could assess the damage herself, but he was informed she was not able to do so. The DCC subsequently cleared the remains away.

Critic spoke with the Proctor, who said the incident was “particularly brainless.” He said Dickie had gone above him and sought to consult the VC regarding the matter, presumably because of his strong feelings. The Proctor said the incident is “almost as bad as breaking bottles in child centre sandpits and leaving sharp cans in the George Street School grounds.”

The fire comes in light of new statistics released in March that show student fires are at a five-year high, with 586 “nuisance” fires in the North Dunedin student area from 2009-2013, according to figures released under the Official Information Act. Last year, the Proctor dealt with 43 students who wilfully set fires, and eight students for fuelling fires.

While Dickie admitted he had no evidence that the fire was set by students, he added that “‘all of this behaviour absolutely stops when the students go home.’’ Dickie has made numerous public complaints against University students, and was involved in removing upwards of 40 students on St Pat’s from his neighbour’s property. He has publicly slated North Dunedin as becoming an “intensely populated and filthy slum.”

As of yet, no culprits have been identified, but Dickie is demanding more affirmative action, claiming the University needs to address “these important issues of mass poor behaviour.’’ For any students contemplating any future couch incineration in public areas, the Proctor issues a clear warning: “Those sorts of things that endanger kiddies, that’s just about going home material.”