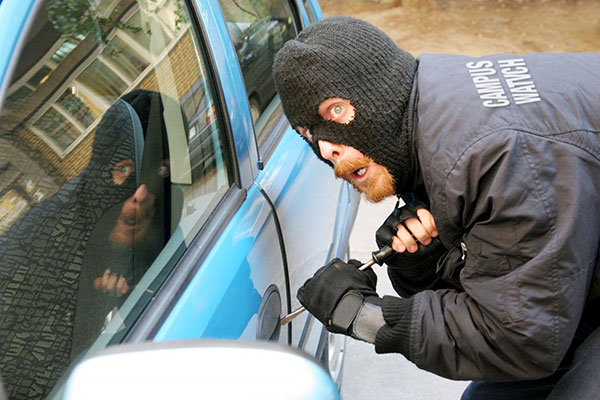 This week in Proctology saw someone set-up Campus Watch to Police – by divulging examples of the former’s “nefarious” behaviour to the latter. A woman, who locked her keys in her car on Albany Street, was attended to by Campus Watch with “some breaking-in gear” to assist her cause. The Police were subsequently called in what the Proctor said was “probably someone in the library having a bit of fun” and the Police were soon on the scene “whizzing around the corner with blue bolts flashing.”

Critic was able to get in contact with the person who anonymously tipped off police. He recalled “two really large guys breaking into a nice car that clearly wasn’t a student’s.” He promptly phoned Police and reported that they were “wearing tracksuits like they were in a gang or something.”

The student said he thought he’d seen the guys “staring at my friends from across the road at a party once, clearly trying to intimidate them.” He also thought he’d seen a guy in “the same tracksuit follow a girl home when she was really wasted.” Following the tip-off, the Proctor said that once the Police had arrived they saw the men in “matching tracksuits” were actually Campus Watch and they “realised they’d been had.”

Aside from Campus Watch’s gang-status being preyed upon, a number of glass injuries around campus, including an intoxicated student who refused to go to hospital despite a very bad cut revealing “tendons and everything in there,” has lead the Proctor to issue a warning about broken glass. “We could get back to the likes of the ‘80s where taxis would stop on the one-way system and refuse to come in to the north end.” While we “certainly don’t want to go back there,” Critic suggests we won’t either, as the Vice-Chancellor’s strong stance on glass – or “chop a leg off” stance, as the Proctor described it – will mean that the Emergency department will sooner be dealing with an influx of amputees at the hands of the VC instead of injuries from strewn glass.

Life as a construction worker was last week’s career of choice for “a couple of lads missing their Meccano sets.” The boys were seen walking into a building site after wanting to “play on a digger.” They soon “discovered running faster than a police dog is difficult,” after the boys had attempted to flee the scene and Police had quickly called up a nearby dog van to rein them in. The Proctor called out the lads’ activity as child’s play and said “if you get the urge to relive your Tonka-toy days; don’t.”