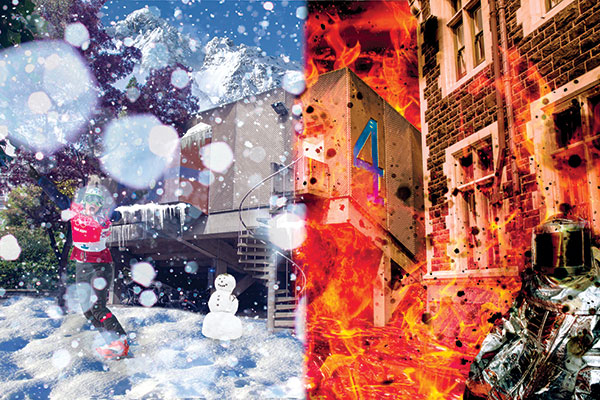 Inferno of injustice in archway four

The overheating of the Archway 4 Lecture Theatre is cause for concern, a sentiment echoed by many disgruntled students and teachers who are suffering in Archway 4’s record temperatures. According to Law Lecturer Andrew Geddes, “current heat problems in Archway 4 make it an environment in which teaching and learning are near impossible.” He described the situation as a “major impediment.” The environment is created by the hand of the University and affects “people who are meant to be academically our best and brightest – they can’t concentrate.”

“On hot days it’s pretty bad, actually. If you get a jog on prior to the lecture it gets pretty hot up the back,” states another student.

This “ongoing problem” is largely caused by the structural nature of the theatre, Geddes says. “The Archway Theatres, especially Archway 4, appear to be designed in a way that there is no airflow … As the hot air accumulates in the theatre it rises up towards the back and doesn’t circulate at all. So we end up with lecture theatres that are incredibly hot and stuffy – the heating that’s turned on, even on cold days, heats the place up like a sauna.”

Class representative, Daniel Doughty, echoes Geddes’ sentiment: “there’s just no ventilation system to cool the place down.” This lack of fresh air has a direct effect on student concentration, argues Doughty. “It definitely affects our ability to learn. It’s difficult to focus on already complex material when we’re stewing in a sauna fuelled entirely by body heat.” In addition to failing concentration, Doughty also raises concerns about the short and long-term effects such a stuffy climate could have on student health. “It’s just that time of year when bugs are floating around; sticking us in a room hot-boxed with germs is making far too many students sick.”

Last week 185 200-level Law students signed a petition calling for improvements to the lecture theatre, stating the humid climate has “adversely affected [our] ability to concentrate on lectures and makes the hall extremely unpleasant.” This petition is to be sent to both the University’s Property Services and the Divisional Vice-Chancellor of Academics, in the hope that improvements will be made in the next renovations. While complaints have been laid with Property Services in the past, this student-led petition is the first to take an active stand in imploring the University to fix this problem. As Doughty states, “If the University wants to spend a great deal on the new facilities it has recently outlined, we only ask a very small portion of that is earmarked to maintain the current facilities that are still very much in use.”

However, due to the difficulty of such renovations, and that improvements may only be made when the busy lecture theatre is not in use, change seems unlikely to come immediately. Geddes suggests merely installing an air-conditioning system would work wonders with fatigued students. “There’s no reason why a couple of grunty heat pumps couldn’t be stuck in there to do what they’re supposed to do.”

Archway Lecture Theatres hold 136 lecture hours per week. Archway 4 is used for 41 lecture hours per week, the most of the four Archway theatres. 200-Level Law makes up 12 of these hours per week, holding up to 250 students for two-hour blocks. This prolonged exposure to Archway’s stuffy environment poses a major problem for students. “Every time we enter the lecture theatre there is a collective groan about how hot it already is, and after two hours of lectures in a row it’s ridiculous” states Class Rep Oliver Allum.

Ultimately, this is an academic issue that should be taken seriously by the University, Geddes argues. “I can complain but it’s [the students] that are really suffering. It’s a big deal.” Critic’s attempts to contact Property Services before print were unsuccessful, as predicted.
This article first appeared in Issue 4, 2014.
Posted 2:59pm Sunday 16th March 2014 by Emily Draper.