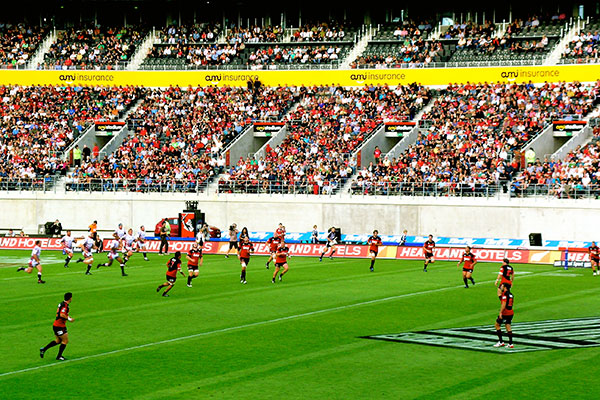 If it ain't broke, another South African team should fix it

Have you finally gotten your head around how the Super Rugby conference system works? Well, even if you have, it is all set to change. Again. Why? Because fuck you ... that’s why.

Interesting announcements and off-the-record comments have been surfacing about the possible evolution of Super Rugby over the next few years. However, some rugby unions have more of a revolution in mind.

Russia currently sit 19th in the International Rugby Board world rankings, so President Putin’s recent move into Ukraine could be part of an IRB coup to establish a Super Rugby team in Crimea to help improve their lowly ranking. Think about it.

Conspiracy theories aside, the expansion of the competition to include a team from Argentina seems to be a more logical move given their recent inclusion into “The Rugby Championship.” While this sounds good in theory, most of the players that make up the Argentina national squad play their club rugby in France and earn very good money. Even SBW couldn’t resist the temptation of the easy Euros.

The UAR has warned that if its next generation of players were not encouraged out of Europe to play in Super Rugby, its national side would struggle and could not realistically compete in The Rugby Championship.

The next logical move would then be a team representing the Pacific Island nations, in line with the IRB’s stated aims to build the game’s worldwide appeal and help lower tier nations to be able to compete with the top teams at the 2019 World Cup in Japan. This has been a popular choice amongst fans for years but, again, they look set to receive the cold shoulder from SANZAR.

The greedy South African Rugby Union have made it clear they want a sixth team based in Port Elizabeth and would not drop any of their existing “big five” to make this happen. Like petulant teenagers, SARU officials have been grumbling for years about breaking away and aligning itself with the European rugby unions to form a rival competition if they don’t get their way.

The ‘Boks want an Atlantic conference and a Pacific conference that would play separate round-robin games then come together for finals. This is an effort to reduce travel time and expenses, which would be welcome news for the Highlanders who already have some very long road trips.

But with the weaker South African teams already propping up the bottom end of the table, if this move goes ahead it would only be a political move to placate the testy ‘Boks instead of a move to enhance the competition.

The SARU also had the cojones to suggest that New Zealand could simply merge the Hurricanes and Chiefs. One does not simply merge rival teams.  And why not scrap a few of the weaker Aussie teams while you’re at it? All this would do is guarantee that a South African team picks up the wooden spoon every year.

I don’t understand the logic there but I will keep you up to date with the plans. And while I’m on the subject of twisted and possibly drug-affected logic, we all know that 2014 is officially the “Year of the Horse,” right?  Back in ye olde days, Highlanders rode horses (I assume.) Following that logic should therefore make 2014 the “Year of the Highlanders!”

Of course, that logic should also mean that the Brumbies (named after actual wild outback horses) have a good chance to win the Super 15, too – hence my bold  prediction of a Highlanders v Brumbies final here in little old Dunedin. You read it here first.

How awesome would that be? We haven’t hosted a final since the 1999 loss to those damn Crusaders at the old Carisbrook. (“Like, WTF is Carisbrook?” I can hear the freshers thinking.)

Back to present reality; the final is not until August, at the other end of another long season in one of the world’s toughest club competitions. But I’m backing my main man, All Black star Ben Smith, to lead the Highlanders all the way to that final this year.

Our lads got their season off to a perfect start against the Blues during O’Week and they only narrowly lost to the Chiefs in the ‘Tron last weekend. To blow away the Blues and run the two-times defending champion Chiefs that close is an encouraging start that coach Jamie Joseph will be very happy with.

We have a bye for the next round and then back-to-back home games against the Force and Hurricanes over the next few weeks. Hopefully the boys can pile on the points and be near the sharp end of the table before their big road trips to South Africa and Australia.

So could this be the Highlanders’ year? Yea ... Nah ... Probably not ...  But fucking go along anyway and support them. That big shiny stadium isn’t going to pay for itself, and my Dad doesn’t want to see his council rates increased any further.

2014 Investec Super Rugby standings (after round 3)