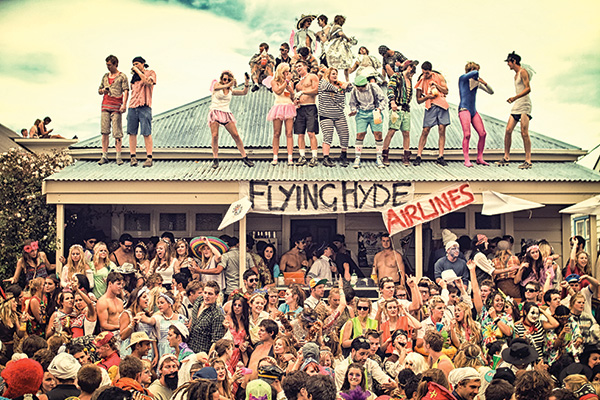 Hyde Street Keg Party looks set to be a royal fanfare this year with the event falling on the eve of the Duke and Duchess of Cambridge’s visit to Dunedin. Stepping up to run the event this year is Admin Vice President Ryan Edgar who said the event day planning is “absolutely” underway.

Being a past Hyde Street resident and one of the hosts of the event last year, Edgar follows on from last year’s Admin Vice President Zac Gawn. When asked if his previous role would be refilled, Edgar said he did “have a man in mind” but that he’d let the residents of Hyde Street decide.

With a bit over a month until the big day, Edgar has already undertaken a flyer drop, started talking with stakeholders and was making door-to-door visits to the current residents of Hyde Street to discuss the logistics of the day. So far Edgar is confident that the event “will come together pretty quick” and said the organising process will become more efficient when a representative from each flat steps forward so that more productive management decisions can be made prior to the day. He also said that the template of the day was set and was “more or less the same as last year,” with a few tweaks to be made to make for an even smoother event.

Edgar appears particularly ambitious in planning the event this year and intends to extend a formal invitation to Prince William, after admitting “I’ll lose my shit” and he “just wants to get him here.” Despite the royal party’s itinerary not pinpointing a visit to Dunedin until the following day, Edgar’s ambitious ploy to involve the royal family in Hyde Street 2014 will see him “looking into TV interviews and working with the council’s itinerary in order to get the Prince here.” Edgar’s admiration of the Duke is now far from secret after exclaiming to Critic that “holy shit, I love Prince William.” But, in the interests of respecting the Duchess’ new found royalty, he added that he “could even make it a joint invite with Kate.”

While Prince Harry may have revelled in all of Hyde Street’s glory given his notorious bad-boy behaviour and notoriously bad taste dress-ups, Edgar admitted that William “may be a tough catch.” If the Royal Party’s itinerary does for some godforsaken reason look to accommodate Hyde Street, and “if we somehow do manage to land [Prince William],” Edgar said he’d look into one of the flats having a royal theme flat so the family could “set up base” on Hyde St.

On the back of the Cook’s closure, the event appears to be the last remaining link in a now almost defunct generation of Scarfie culture. Edgar also said the success of Hyde St was potentially the “last bargaining chip” that OUSA held against the DCC in their dramatic bid to enforce a liquor ban in North Dunedin. However, OUSA’s successful premiere of an organised event last year, with the cooperation of the University, St John and the Police, helped act as “a headliner to show that a liquor ban wasn’t necessary” and that events such as this are still possible, according to Edgar. He said, “At this stage [the DCC] are good about [this year’s event],” but he still considered the DCC to be “fair-weather friends for us.”

With last year’s event limited to only 3500 tickets, the majority of tickets were allocated to residents to on sell at $2 a ticket to friends, and the remainder being sold for $5 to the general student population. Ticket sales look to take a similar form this year, which Edgar hails as contributing to “less piss in the corner of the lounge,” but personally, Edgar “wants to up the numbers.” He said he’d like to open up the number of tickets available to the general student population and would ideally like to add an extra thousand tickets to the event. However, he is aware of measures in place that limit the number of people per square meter.

The date has been confirmed with St John and the Police, who have agreed to allocate more resources to accommodate for the day. Evidently, if the Royals did make it to the event Edgar wouldn’t be the only one to “lose his shit,” but if the Duke and Duchess of Cambridge do choose to hyde from this year’s party, rest assured that Hyde Street 2014 will have its reign regardless.