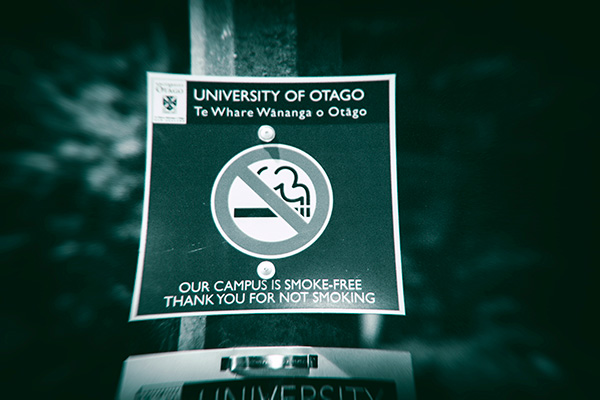 Vaporisers and edibles only on campus

The introduction of a campus-wide smoking ban on 1 January 2014 has harmonised the University with others throughout the country, but many appear to be side-stepping the ban and gutters outside campus have been clogged with cigarette butts.

The policy does not outline any smoking-friendly areas in or around the campus, with the removal of public ashtrays aggravating the issue of cigarette littering. In particular, Cumberland Street’s gutters are now swathed with innumerable cigarette butts, while the adjacent Museum Reserve is now comprised of a proprietary blend of cellulose filters, trampled soil, and discarded Student Life brochures.

One subset feeling the sting of the University’s attempt at cold turkey is the cannabis-advocacy group NORML. However, members of the group have since adopted non-combustive means of ingestion. Cannnabis advocate Abe Gray believes that vaporisers are the logical future of NORML. “Many of our members weren’t aware of the health benefits of vaporisers until now, so I guess we have the University to thank for that.”

Although many at the University believe the policy will bring an end to 145 years of on-site tobacco consumption, patrons of the University’s official nightclub Re:Fuel have been spotted doting the odd honorary cigarette outside Union Hall in the wee hours of the morning. Whether this act of defiance will become commonplace is yet to be seen, but effective late-night monitoring of on-campus smoking appears to be hard to implement en masse.

The move to a smoke-free campus follows a nationwide trend prompted by the University of Auckland in 2010, and accompanies steady tax-hikes on tobacco products as well as a total ban on smoking in New Zealand prisons introduced in July 2011. The policy also complements the Maori Party’s Smokefree 2025 initiative which endeavours to all but erradicate smoking in New Zealand by that year.

Second-year psychology student and John Player Special-smoker Oliver Gaskell objects to the ban. “People need a place to chug a ciggie – if they really want to minimise harm, smokers should be provided with designated areas to keep them away from the public.”

Smoking-related illnesses kill as many as 5000 New Zealanders every year, with roughly 350 of those from second-hand exposure. If you would like to quit smoking, please contact Quitline on 0800 778 778. If you would like to start, please contact British American Tobacco NZ on 0800 113 011.
This article first appeared in Issue 1, 2014.
Posted 6:57pm Sunday 23rd February 2014 by Thomas Raethel and Claudia Herron.