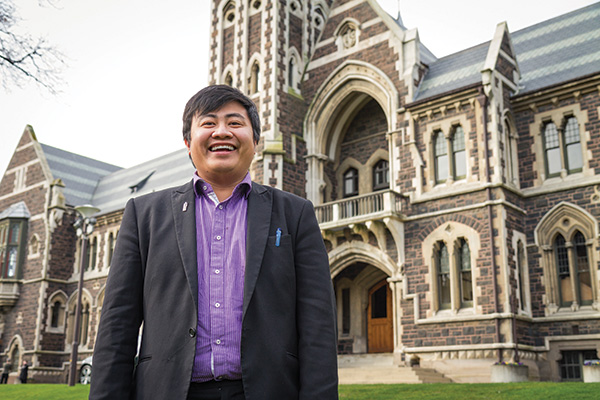 After weeks of speculation, OUSA President Francisco Hernandez has declared his candidacy for the upcoming Dunedin City Council elections.

Hernandez made the decision to run after deciding the Council needed more student voices. So far, Hernandez and Co-President of Students for Environmental Action Letisha Nicholas are the only students to have declared their candidacies.

“We’ve had some long-term incumbent Councillors, and I think it’s time for a fresh vision on the Council,” Hernandez told Critic on Wednesday.

Hernandez believes he can offer this vision, along with “proven leadership” and “a great track record of getting shit done.” He cited the Housing Warrant of Fitness legislation currently before the Council, which he has helped to draft, and the Memorandum of Understanding (MOU) between OUSA and the DCC as examples of his achievements this year.

Hernandez described the Warrant of Fitness legislation as “the Holy Grail that people have been looking for in terms of fixing student flats for ages, and I’m the president to get it done,” and pointed out that OUSA is “the first students’ association to have a memorandum of understanding with the territorial local body.”

Although Hernandez confirmed that he had been approached to run on Mayor Dave Cull’s Greater Dunedin ticket alongside Nicholas, he had decided to run as an independent. “There were some preliminary conversations earlier in the year, but I decided to pay the iron price,” he said. The “iron price” is a reference to the House Greyjoy from A Song of Ice and Fire/ Game of Thrones, whose members insist on taking lands and possessions by force. Hernandez’s comment suggests, therefore, that there may be a violent coup in the offing.

“I think an independent voice for students is important,” Hernandez said. “If I do get on the Council, the only people I’ll owe favours to are the people who voted for me, and that’s how it should be.”

Although Hernandez had not yet decided if he would make an endorsement for Mayor, he commented that Cull, who is standing for re-election, “has been excellent in terms of engaging students.”

He also urged students to back Nicholas’ candidacy. “I would urge any student who voted for me to put her as their second preference,” he said. “I like Letisha. Not in that way. I like her as a person, as a political candidate, a human being. But not in a romantic way.”

Both Hernandez and Nicholas are standing for the Central Ward, to which 11 candidates are elected. In total, there are 15 seats on the DCC, including that of the Mayor.

Hernandez declined to reveal the identity of his campaign manager, but confirmed that 2011-12 OUSA President Logan Edgar has a “senior role” in his campaign.

Although he is participating in paid Zentech drug trials, Hernandez is confident that the campaign will not throw up any scandalous revelations around substance abuse, claiming that he is “too uncool to smoke drugs.” Hernandez confirmed to Critic that he “did not inhale.”