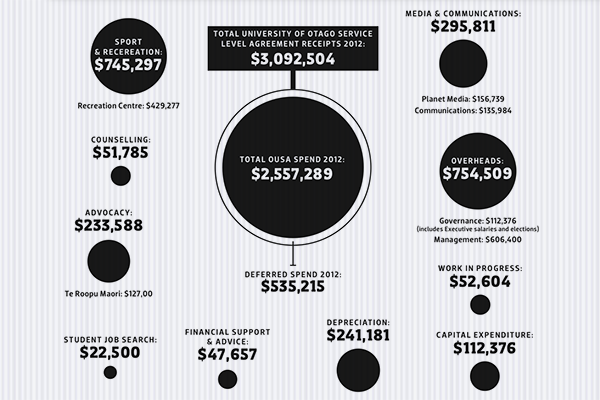 The 2012 Audit: How OUSA Spent Your Money

An audit of OUSA’s Service Level Agreement (SLA) budgeted spending in 2012 was tabled at last Tuesday’s Executive meeting. The SLA is the mechanism by which the University of Otago funds OUSA.

The audit, carried out by nominated accountants PricewaterhouseCoopers (PWC), shows that OUSA had a net deferred spend of $535,215 in 2012. This means that the amount of money OUSA received from the University last year was significantly higher than what was actually spent. However, this will be offset over the next two years.

The deferred spend is primarily due to delays to renovations of OUSA’s Recreation Centre and the main OUSA office complex. When such works are planned, OUSA typically asks several building companies to bid for the project. This was not feasible in 2012, after increased market demand from the Christchurch rebuild had raised builders’ prices. As a result, OUSA delayed certain parts of the renovations until 2013.

OUSA President Francisco Hernandez told Critic that “the voluntary status of the audit demonstrates the importance of openness and accountability in my and OUSA’s agenda. No other students’ association in the country does this.

“We are very happy with the results of the audit overall, but it is frustrating that Christchurch took out builder competition with the larger fees it was attracting. I would have liked to cut a ribbon, but at the end of the day it wasn’t possible.”