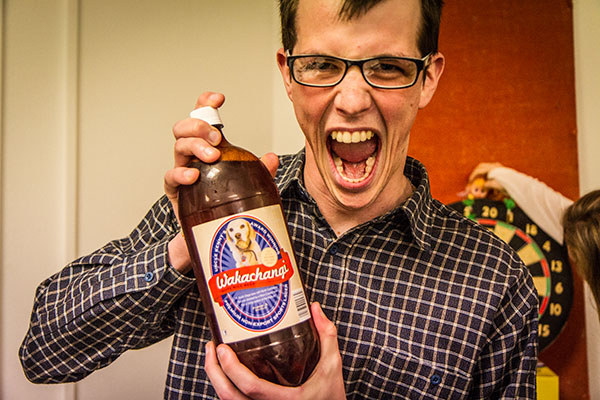 Comedian Leigh Hart visited Leith Street Liquorland on 13 July to promote his new beer’s launch in Dunedin. Wakachangi Lager is to be primarily marketed toward New Zealand students. Hart told Critic that he considers the lager to be an alternative to brands like Speight’s. He admitted that the process of creating and marketing a new beer was a “steep learning curve,” only fully envisioning the beer “a couple of weeks ago.”

“I’d been talking about it with my mates for a while, then we realised that Re O-Week was the last chance we had to roll it out to students properly before O-Week next year,” added Hart. Hart and his crew of promoters had previously visited Hamilton and Christchurch to launch the beer. “We sold out in 18 minutes in Hamilton.” In keeping with Otago students’ reputation as lovers of beer, three times the quantity of lager was needed at Leith Street Liquorland than the two other locations. The beer took only half an hour to sell out.

Wakachangi Lager’s online advertising campaign, distributed via the Moon TV YouTube channel, has already garnered a cult following among students. One of the advertisements has had over 10,000 views in the eight days since it was uploaded.

Hart believes the quirky humour utilised in the videos, as well as the bottle’s distinctive label, have widespread appeal, adding that “humour is non-geographic in New Zealand.” He deliberately chose to produce a “middle of the road” beer, noting that many of the new beers on the market are craft beers. “Beers like Tuatara are often a bit hoppy, and cost about 30 dollars for a 12 pack” – a price not suited to students. Hart said that the recipe they chose was the last one they tried, and is specially designed for the student palette.

While Wakachangi’s range is currently limited to 2L bottles, Hart intends to roll out more conventional glass stubbie bottles in the near future. Wakachangi’s 2L bottles of lager cost $12.90, and contain 7.9 standard drinks.