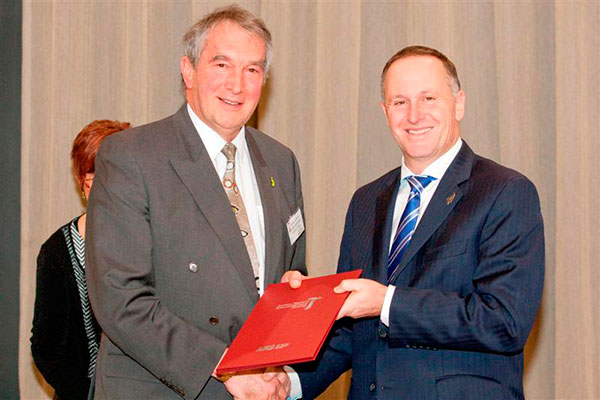 Associate Professor Gordon Sanderson, recent recipient of the Prime Minister’s $30,000 Supreme Tertiary Teaching Excellence Award, has slammed the University of Otago’s approach to teaching. After accepting the award, the Dunedin School of Medicine Ophthalmology professor told lecturers who want to advance their careers not to waste their time teaching.

“The University is not very enthusiastic about teaching,” Sanderson said. “They are much more interested in research and they reward their staff for good research. That to me is wrong, but that’s the current environment.”

The Otago Daily Times also reported last week that a few months prior to Sanderson receiving an internal Otago teaching award, given to only three lecturers by Vice-Chancellor Professor Harlene Hayne, he had been sent a letter from her informing him that he was not to receive a standard biennial pay rise. “I am going to frame [the letters] side by side,” he told the reporter.

Moreover, he believed that “the quality of teaching is suffering” as a result of the Performance Based Research Funding (PBRF) model, which favours research over lecturing.

The lecturers’ union has backed Sanderson’s comments. Associate Professor Brent Lovelock, a Tourism lecturer and co-president of the Tertiary Education Union’s Otago branch, said that the Union has “observed a reduction in non-research staff in some departments in order to appoint more research-active staff. This national refocus on PBRF has led to many excellent teachers being lost.

“We believe that lecturers who challenge their students, or those who teach harder compulsory papers, or those who are adopting innovative ways of teaching, must also be recognised and rewarded through a fair system.”

OUSA President Francisco Hernandez told Critic that the balance between teaching and research needed to be restored. Hernandez believes that “the TEC [Tertiary Education Commission], which is controlled by the Government, has skewed the funding towards research.”

However, not all University staff are toeing the union line. Associate Professor Michael Winikoff of the Information Sciences department told Critic that “Gordon’s advice is not good advice. The promotion policy is very clear that none of teaching, research or service are more important.” He said the Otago Daily Times’ reportage of Sanderson’s statements “sparked a considerable amount of discussion on an email list” and that “many academics disagreed with the claim that teaching was undervalued at Otago.”

Tertiary Education Minister Steven Joyce also denied that government funding privileged research activities. In a written statement, he told Critic that “more than 80 per cent of total funding is allocated to teaching and learning. In 2013, the University of Otago was allocated $55 million PBRF funding, and $215 million SAC [Student Achievement Component] funding.”

The University of Otago has refused to comment on the controversy.