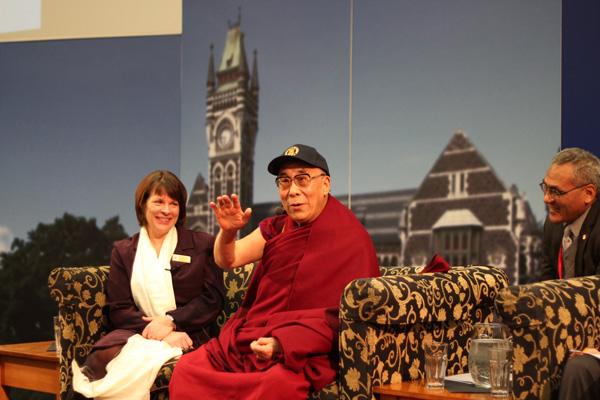 500 people packed out St. David lecture theatre on Tuesday to see the 14th Dalai Lama. Despite earlier trips to the city, this was his Holiness’ first official engagement at the University of Otago, and his first at any New Zealand university.

His Holiness was welcomed in typically eclectic Dunedin style: frosty conditions, bagpipes, a kapa haka group. University of Otago Vice-Chancellor Professor Harlene Hayne put a grin on his Holiness’ face by presenting to him his very own University of Otago cap, which he proceeded to wear gleefully throughout the session.

The Dalai Lama answered questions the audience members had submitted. The question and answer session lasted a little over 90 minutes and was chaired by Professor Mark Henaghan of the Law faculty. His Holiness addressed subjects ranging from questions about life and death, the interaction between science and religion, and states of consciousness, to the political elephant in the room: Tibet’s struggle to be granted full autonomy by mainland China.

The Dalai Lama combined wisdom, kindness, insight and humour in his answers. He emphasised that information is power, and information sharing is key: whether in having to triage patients at a medical centre because of limited resources, or to combat misinformation under Party rule in China.

He urged the audience of staff and students to “think more objectively, more holistically and with more vision” and make the 21st century one of peace and happiness, in contrast to the century of global conflict and suffering through which his generation lived.

Importantly, the Dalai Lama also gave some insightful advice against combating middle-age spread: don’t eat after lunchtime. It clearly works for him – his Holiness might have been on the job for 63 years (he’s 77 years old) but he could easily pass for 50. His cheeky grin helps too.
Posted 1:13pm Thursday 13th June 2013 by Phoebe Harrop.