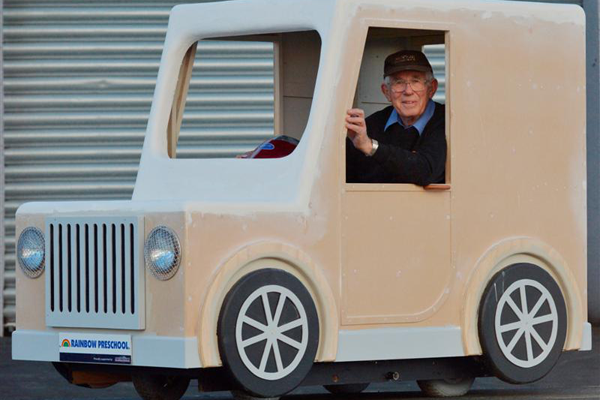 An elderly gentleman from South Dunedin has been outed as a “pimp” by the Otago Daily Times after a popular YouTube video inspired them to publish an article about the man’s “pimped out” mobility scooter.

While the aged hustler is far from making coin from the South Dunedin hunnies, the ODT revealed the man on the highly-modified mobility scooter, inspired by Postman Pat’s mail van, to be 77-year-old St Kilda Resident Warren Ockwell.

“South Dunedin’s coolest man” became a YouTube sensation after the video showing Mr Ockwell driving the modified scooter around St Kilda was posted on the ODT website last week. At the time Critic went to print, it boasted over 8,500 views. A tip-off revealed the mobile man has been building floats for Rainbow Preschool to enter in Dunedin’s Santa Parade for over a decade, with the scooter being his latest creation for the annual event.

The ODT reported that Mr Ockwell had no idea the video was online and was “humbled” by the many views it had received. Critic suspected that Mr Ockwell would be less humbled by ODT’s comparisons between the float and the commodification of prostitution. However, reports suggest New Zealand Post are looking to pimp out their own Courier Vans in an attempt to thwart the imminent collapse of the mail service, and to earn an extra buck.

While the mystery of South Dunedin’s premier pimp remains a secret, the article heartwarmingly told of Mr Ockwell’s intention to keep making floats due to the satisfaction of putting a smile on the faces of the Rainbow Preschool children. According to the ODT, the children knew Mr Ockwell as “Poppa,” and Critic suspected he would love it if they called him “Big Poppa.”