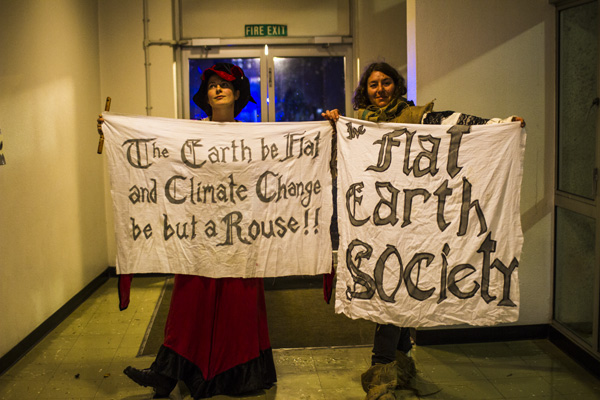 "Climate Change is not a thing"

Prominent climate change skeptic Lord Christopher Monckton gave two presentations in Dunedin last week, in which he argued that the dangers of human-induced climate change had been greatly exaggerated and that scientists had deliberately tampered with climate data in order to show increasing global warming.

The first 90-minute presentation was held at lunchtime at the Savoy, just past the Octagon. Succulent chicken breasts were provided to each of the roughly 150 attendees. 70 people attended the second 130-minute presentation, which was held in the University’s Burns 1 lecture theatre.

The presentations were held on Tuesday 23 April as part of Monckton’s New Zealand tour, which finished on Friday with his 30th and final presentation, in Invercargill.

In the presentations, Lord Monckton individually criticised dozens of temperature and sea level graphs, explaining where the “bad science” had occurred in each case. He told the audience that he “couldn’t believe science had become so corrupted.”

Lord Monckton criticised the notion that “if enough people in white coats with biros in their pockets say something, everyone must defer … The idea that consensus is good in science is a fallacy – Aristotle said this.” He described the scientific establishment as “the new high priesthood,” and named a number of scientists whom he would like to see convicted for fraud.

As well as denouncing much climate data, Lord Monckton also criticised the “absurd exaggerations” in the media about climate change, such as Al Gore predicting a six-metre sea level rise when the reality was closer to six centimetres.

Lord Monckton had done his research on Dunedin, saying that the Dunedin City Council had caused the value of 10,000 Dunedin homes to be cut in half by declaring that a sea level rise caused by climate change will render the homes unviable.

Lord Monckton said that even if the worst-case predictions were true, the cost of preventing it would be 50 times the cost of the damage that would occur.

In Dunedin, a small protest was held outside the entrance to each presentation. Although the protests numbered just three and two people respectively, they merit inclusion in this news report due to the effort the participants, dressed in medieval clothes and holding “Flat Earth Society” banners while playing the flute, put into their costumes and props. Lord Monckton asserted during his presentations that the media will “publish any old tosh so long as it has a pretty picture or an amusing stunt.” Critic is guilty as charged.

Lord Monckton told Critic that the protestors were part of a “centralised” protest campaign involving people calling themselves the Flat Earth Society. He had encountered them in Australia and at “a couple” of universities in the North Island.

Critic sent two political correspondents from both sides of the climate change debate to cover Lord Monckton’s presentations – their reports are aptly situated to the left and right of this article.