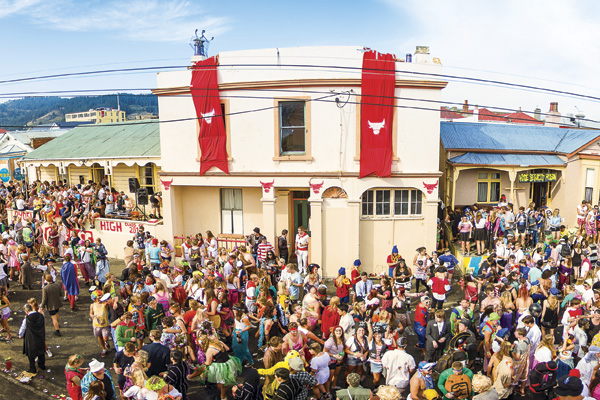 You can hide the event, but you can’t Hyde the Street

After much concern and debate, the annual Hyde Street Keg Party took place on Saturday 13 April before the watchful eyes of media, the University, and other relevant parties, who finally declared that behaviour was “OK”.

3500 students turned up to the event, which officially started at 9am despite most festivities kicking off with the age-old “6 before 6” routine. The future of the annual party was in jeopardy after the 2012 event ended on the floor for those who fell through the roof of a Hyde Street flat.

Rules such as limited attendance, a ban on first years and non-students, the continuation of the no-glass policy, a one-way door policy after 2pm, and a higher security presence meant that a careful eye was kept on all attendees. OUSA President Francisco Hernandez said that the success of the event “could not be attributed to one factor.”

An area of obvious improvement was the number of arrests made. Campus Cop Max Holt confirmed that there were 15 arrests made on the day, all of which were minor offences, particularly in comparison to the offences committed last year. Only one female was arrested, due to extreme intoxication, but was released once sober. Unsurprisingly, the ODT generously reported that 21 arrests were made as a result of Hyde Street, with 10 of these being “Dunedin tradesmen”. However, Holt stated that there were four non-student arrests, including two soldiers and a builder from Christchurch.

The positive appraisal of the event by both media and organisers raises questions over whether or not the event will continue now that students have proven their ability to party responsibly. Otago University Vice-Chancellor Harlene Hayne stated that it was “too early” to discuss the future of the event, while Hernandez was positive, stating he was “pretty confident” about the future of Hyde Street.

Although Hayne attended the party, she told the ODT, “In a perfect world, the students who attended the Hyde St party would have spent Saturday in the library.” In another interview, she also agreed that the media didn’t do their best to portray any student activity other than drinking. “I would love it if just once the news media showed up to film students going to the gym before dawn or spending a Saturday volunteering at a local school or building fences for DOC. The scarfies here at Otago deserve better than they currently get from the media,” she said.

OUSA received the brunt of complaints regarding the new and improved Hyde Street keg party. Students ridiculed the requirement of emergency contact phone numbers and wristbands that were checked on entry. Kyle Walters took to Facebook, saying “wat if I plan on just jumping the fence? Wat then.” Critic speculates Kyle found out very quickly “wat” would happen, after being immediately arrested for trespass.

As a result of these conflicting views, the Agnew Street keg party announced its presence on the keg party scene with a more open-armed approach. “Freshers you’re welcome – there needs to be some easy pussaayy to slay,” the invitation read. Critic assumes that the “Are You OK” team will be replaced by kind third years offering a door-to-door transport service to UniCol.
This article first appeared in Issue 8, 2013.
Posted 5:13pm Sunday 21st April 2013 by Bella Macdonald.