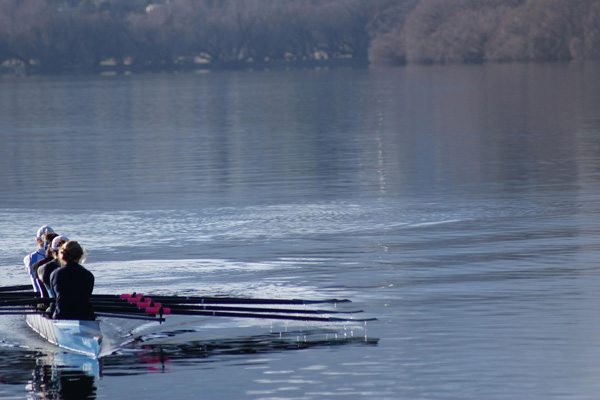 Remember last year? When the London Olympics were on? Or even three years ago, when the Rowing World Champs were hosted up in the North Island? Well you should. Let’s face it, when it comes to sports we as a nation rely heavily on pieces of equipment to compete. Usually a boat. I had the pleasure of meeting one of these remarkable boat-rowing athletes – Otago’s own Laura Tester.

I wouldn’t be surprised if Laura sounded familiar to some of you. Laura is a postgraduate student here at the University of Otago. She is doing her Masters in Microbiology and Genetics and has been studying both full- and part-time for the better part of a decade. But we aren’t here to talk about her studies, rather her impressive rowing resumé. Laura received a University Blue Award last year, which was in fact five years late. “I think I was actually meant to get it in 2008 but somehow I got left off the list, and the rest of my crew received theirs!”

Laura has been rowing for a decade, and has been achieving from the get go. “I’ve won a couple of national regattas and numerous medals at Maadi Cups throughout school.” It hasn’t stopped at school level either. Laura was selected in the New Zealand Universities Trans-Tasman Team in 2008, 2011 and 2012. When I asked how it felt to beat the Aussies she lit up with a grin. “It always feels good to beat an Aussie, we have absolutely annihilated them in our event two years in a row.” Laura was part of the NZ Universities Lightweight Quadruple Sculls Team who dished out these two ass-whoopings.

Laura has what some might call a mild obsession with rowing. She loves it for the physical thrashing she takes from intense training regimes and the fast-paced competitive action. “I just love the feeling of training hard, of pushing myself to the limit.” She has nothing bad to say about the sport. “If there was something I didn’t like about rowing, I don’t think I would still be doing it.” However, she will admit to one embarrassing incident in front of coaching legend Dick Tonks. “Me and this girl who hadn’t been in a boat together were put into a double. We were the first to go out and row. Dick was in the coaching boat so we decided to do a few exercises but we just flipped.” Although they can’t have been the first crew to get the jitters in front of Dick, she insists it was very embarrassing.

Laura has recently moved into a Lightweight Single Scull. “Last year at the World Champs was my first proper international event for single sculls, and there were 11 other competitors from different countries. I ended up coming fifth overall.” Laura is destined for bigger and better things on the rowing scene. She was recently invited to National Rowing trials, where all the movers and shakers make their mark and gun for a spot on the national team. Unfortunately, due to some questionable water hygiene, Laura was unable to attend as she had septicaemia (blood poisoning). She plans to attend next year and make it to the 2016 Olympics in Brazil, and hopefully the 2020 Olympics as well. “My next goal is to make it onto the New Zealand Universities Squad which goes to the World Champs each year. I will be going to Rio regardless of whether I am in the squad or not!”

Critic wishes you all the best Laura, and we will keep one eye on your future progress.