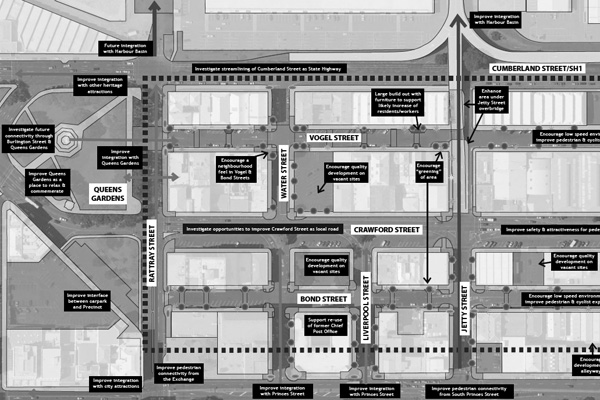 As ongoing refurbishment of the Queens Garden and Vogel Street area of Dunedin continues, an announcement by Dunedin councillors declared that the area will be revitalised for “creative” purposes.

While Critic speculates that this is an attempt to create a similar alternative culture to Wellington, Dunedin City Council Policy planner and current Otago Student, Dr Glen Hazelton, confirmed that “It’s not for us to force creativity – it is about creating the spaces in which people can find those synergies and inspirations.”

Hazelton told Critic that improvements needed to be made as “important heritage buildings were increasingly at risk of demolition and the whole look and feel of the area declined.”

The need to reinstate the area was also the result of a change in the city’s demographics. “The area was once home to many of Dunedin’s largest and most successful companies,” said Hazelton. “Over the years, as the economy changed and the vibrancy of the city shifted, the area declined. Business activity in the area declined and buildings fell into disrepair.”

While the cost of the entire redevelopment will be difficult to predict, owners of properties in the area have already invested in the renovation and strengthening of some properties. The council has also assisted via grants and rates relief in the area to give more incentive to upgrade their properties. Hazelton said they estimated the street works could end up costing around $2-3 million excluding the two-waying of streets.

With the first improvements being made to Vogel Street starting before the end of June this year, changes will soon be visible. Although there is no set time frame for the completion of the revitalisation of the area, Hazelton said that the Council would like it to be completed in 10 years. However, this depended on the contributions of property owners in the area.

The end result, according to Hazelton, is to “expand the opportunities for buildings to be re-used, particularly by creating a nicer environment to be in and encouraging more people to come to the area to work, live and spend time.”