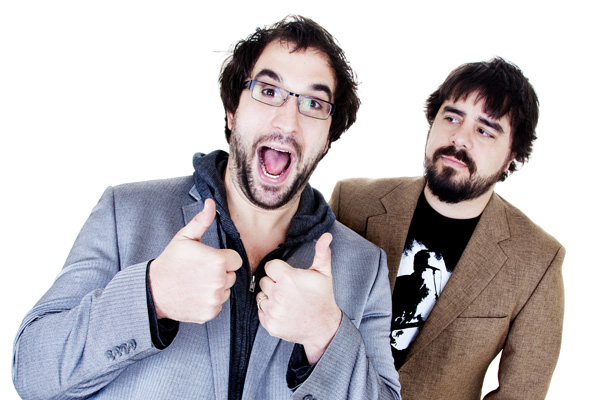 Two of TV3’s 7 Days comedians, Ben Hurley and Steve Wrigley, are to visit Dunedin in early April as part of their World Famous In ... comedy tour. The tour, which has already taken in Palmerston North, New Plymouth and Hamilton, will be filmed and turned into a show, Ben and Steve: World Famous In ..., which will be aired on TV3 in May.

Speaking to a stammeringly star-struck Critic, Wrigley said the pair was “trying to make TV that’s not just Auckland-centric.” The aim is apparently to celebrate New Zealand’s backwaters while resisting the sweet, sweet temptation to tear them to shreds. “It’s not about mocking,” Hurley insisted. “We’re not coming to rip the piss out of the city.

“Dunedin definitely has a reputation as being student and rowdy and a bit drunk, but there’s probably more to it than that as well.”

Hurley and Wrigley will “go out and meet local legends” to feature on the show, before hitting the town on Friday 5 April to get a taste of Dunedin’s nightlife. For those on the lookout for a famous addition to their flatwarming, Wrigley is hoping to score an invite: “it’s always a really cheap way to finish out your night.”

The pair will be joined by Jeremy Elwood and Peter Hellier (of Rove fame) for a show on Saturday 6 April, and by Rhys Darby for a post-show interview. When asked which of the five comedians is most likely to embrace the Scarfie vibe and immolate a nearby sofa, Hurley said “I’m going to say Pete Hellier, because he has a kind of roguishness about him. And as a first-time visitor to Dunedin, I think if someone said to him ‘this is what we do here,’ he’d probably be gullible enough to just do it.”
This article first appeared in Issue 5, 2013.
Posted 6:30pm Sunday 24th March 2013 by Sam McChesney.