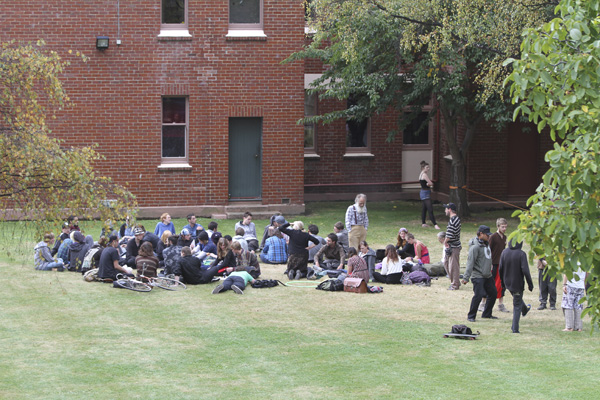 Blaze against the machine

Student political group NORML has “big plans” to sidestep the University’s new smoke-free policy, having purchased a “fleet of vapourisers” and putting more emphasis on edibles such as brownies and cookies.

As an alternative to smoking the cannabis plant, vapourisers extract the active ingredients for inhalation. Critic spoke with NORML smokesperson Abe Gray, who said the idea to use vapourisers on campus came from countries where cannabis is legal, but smoking is banned indoors. “You’re not combusting the plant material so you don’t have any real smoke and it’s also much healthier. There are none of the carcinogens either.” While Critic commends NORML for its health-conscious choice, it is yet to find evidence that the excessive consumption of cakes and brownies is a healthy choice.

While equipping the 4:20 club with vapourisers and the culinary skills to be NZ’s Hottest Home Baker will ensure the club is smoke-free under the ban, Gray said that the use of edibles such as brownies will be a more serious legal issue than their current regime. “Technically brownies are a class B substance, and making brownies is manufacturing a class B substance.” However, NORML have turned this argument to ashes, remarking that the group already “defy [the University] blatantly” and that “there is no reason why this new thing should have any bearing on us.”

Critic spoke to University of Otago Vice-Chancellor Professor Harlene Hayne to gauge her reaction to the potential loophole. While she “had no idea” what the NORML group were planning, a silent nod at the mention of vapourisers was indication enough that the exit of NORML was too good to be true. Prof. Hayne replied that the University has a “clear position on illegal activity: we do not support, nor do we condone it on campus.”

Gray had indicated that NORML were “disappointed” that the University hadn’t consulted with the group about the smoke-free policy. However, Prof. Hayne retorted that OUSA were given the task of consulting with students and if NORML group members were students they would have had “ample opportunity to have their say.” She added that “perhaps they should have spent less time protesting and more time getting involved in the real political engine at university.”

In an OUSA referendum last year, 78% of students voted “yes” to the question, “Should OUSA support the move towards a smoke-free Campus?” However, little public debate occurred over the referendum. Gray believes that OUSA intended the new policy to supercede its previous tolerance for the 4:20 protests, and recalls that OUSA figures seemed dumbfounded when confronted with NORML’s plan to sidestep the smoking ban. However, OUSA President Francisco Hernandez denies this, telling Critic that OUSA holds a neutral stance towards the protests and that this stance will be unaffected by the smoke-free policy.
This article first appeared in Issue 5, 2013.
Posted 6:30pm Sunday 24th March 2013 by Claudia Herron.