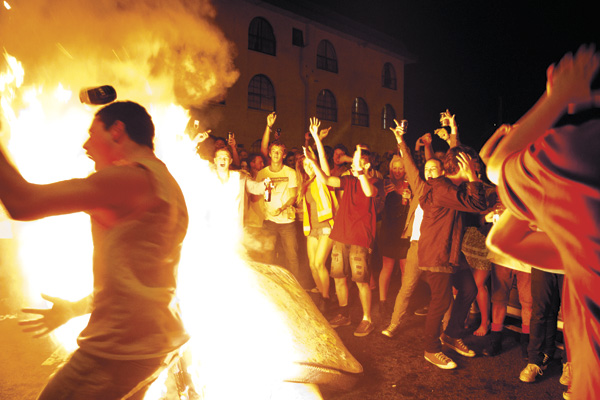 Pyromaniac students may well be losing their get-out-of-jail free cards after Police announced they would no longer offer pre-charge warnings or diversion to those caught lighting couch fires. Fire starters would now meet their match in both disciplinary action under the University’s Code of Conduct and the possibility of a criminal record.

The announcement follows a meeting between the Police, the Fire Service, the University of Otago and the Otago Regional Council, which resulted in a “zero-tolerance” policy on couch-burning behaviour.

Critic spoke with University Vice-Chancellor Professor Harlene Hayne, who “strongly supports the police’s decision” to take a stronger stance. “This is really dangerous stuff. Students have had way too much to drink around fires, they fall into them, they use aerosol cans to ignite them … it is a disaster waiting to happen.”

While in recent years there had been a steady decline in the number of fires in the North Dunedin area, Police Tactical Coordinator Sergeant Dave Scott told Critic that this year has seen more than double the number of couch fires compared with last year or the previous year. While Sergeant Scott said there was “no real explained reason” why the number of incidences appeared to have “blown out,” it appeared the Fire Service, Police and residents of North Dunedin will do whatever they can to “nip it in the bud” and prevent couch fires happening in the future.

The 2012 Annual Discipline Report for the University shows that 512 people saw the Proctor in 2012, 86 of whom wilfully set a fire, and 19 of whom wilfully fuelled a fire. Of these 512, 15 were referred to Prof. Hayne during the year, seven for fire-related incidents. One of the referrals was a second-year student who piled wooden materials onto the middle of Leith Street North and set it alight, as well as a second-year student who wilfully fuelled a fire by throwing a mattress onto it.

Prof. Hayne noted that while there may be a trend in second-year students being the culprits, “that has always been the case.” She attributed the trend to the sudden independence of and lack of support mechanisms for students who move into flats in second year, in contrast to the first-year residential college environment. She said that most of these were “responsible, bright, articulate” students who “make some bad choices.” Aside from the bright part, Critic wonders how a second-year student who sets fire to himself while draped in a duvet could possibly fit into this category.

Sergeant Scott said it was necessary for students to realise that the Police action was not an attack on students and that the stronger stance applies to all offenders lighting fires. He noted that the last three arrests for lighting couch fires had all been non-students. Prof. Hayne observed that the law should not treat students differently to other citizens. “I think students need to think quite carefully about what would happen if a group of people in South Dunedin decided it would be a good idea to throw their furniture in the middle of the street and set it on fire. There’s absolutely no doubt about it, there would be arrests.”

Critic spoke to one student, for whom the new policy was hitting hard. “I love burning couches so much,” he said, trembling slightly. “I’ve received diversion for couch-burning under fifteen different identities now. If I can’t burn them in the street I might have to start taking couches to crematoriums or industrial waste disposal plants to incinerate them in a safe and legal way.”