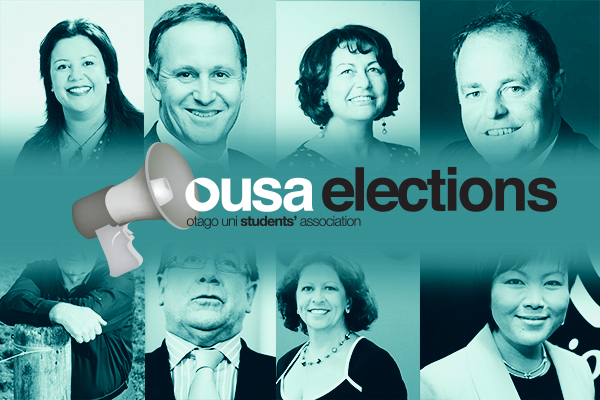 Somewhere in Dunedin An Executive Waits

OUSA has set the voting dates of September 24 to 27 for the election of next year’s OUSA student executive. Nominations will be open from September 17 to 20, with the results to be announced on the evening of the 27th.

Each of the ten positions on the executive is up for grabs, and with current OUSA President Logan Edgar unable to run again due to term limits there will no doubt be fierce competition for the top spot. Critic understands that current exec members Francisco Hernandez and Ryan Edgar (younger brother of Logan) are considering a tilt at the top job, and there are rumours of a few OUSA outsiders taking a run. Critic asked Admin VP Jono Rowe if he had any intentions to further his political career, but he responded with a nonsensical rant about politics being “all about getting in the backdoor”. At this point Critic backed away slowly and stopped asking questions.

Nominations require signatures from two OUSA members (all University of Otago students are members unless they have requested to be struck off), and Critic understands that Rowe is championing a suggested policy change which will prevent sitting executive members from nominating candidates themselves. This follows allegations that Logan Edgar breached election rules at this year’s OUSA by-elections by nominating candidates that he supported.

OUSA has been plagued by a lack of internal political debate this year, with President Edgar admitting that he cannot remember anyone casting a single vote against a motion in 2012. It remains to be seen whether this flaccid executive will be replaced by student politicians with fire in the belly, or whether their political tepidness is a symptom of greater student apathy.

Critic will be hosting an election forum on Friday September 21, where students can grill the potential candidates on their experience and qualifications for the role. When asked if it was true that the forum would be hosted at a student drinking establishment, Critic Editor Joe Stockman was too drunk to respond.

If you’re interested in running for the student executive, here are the job descriptions for the ten positions available:

You da Boss, except not really. As the official spokesperson for OUSA, you are the national face of Otago students. You interact with the University, the City Council, and the media. You also get to sit on a whole bunch of different boards (but you get paid for it, so it’s sweet), and act as a director of a few companies.
It’s a full-time gig – you’re expected to work at least 40 hours per week – so it means taking a year off from study, but it looks pretty fancy on the CV. Calling old men “dinosaur cunts” is optional.

If the President is the face of OUSA, the Admin VP is the brains. Your first duty is to assist the President in carrying out theirs, so you can see where this gig is heading. You do get to play big dog if the President is absent. You’re the policy person, the organisation person, the one who knows what everyone is up to. You also get to sit on boards and act as a director and stuff. At 20 hours per week, you’re working pretty hard. But shit looks good when you leave uni, y’all.

It’s all about the Benjamins. Third in line to the OUSA throne, you’re the go-to person whenever anyone is looking for those cash dollars, or wants to spend some. OUSA has some serious cash reserves, and actual assets, so it’s not a nothing role. You help set the budget, organise audits, sit on committees, and report back to the rest of the exec on why you spent every last dollar at Lucky7. Want to be a CFO one day? Get this gig and you’re golden. 20 hours per week.

It’s getting a bit easier now. You’re still cranking 20 hours a week, but it’s more about sitting on committees, and sitting in on the Uni’s Senate. You’ve got a bit to do with overseeing the class reps system, and you interact with the Uni’s Academic Service peeps. You’re expected to reach down and help the other members of the exec, and with 20 hours per week, you’ll probably have time.

You’re now fifth in line to the Presidency, which is like being the Minister of Agriculture, but whatever, you’ve got the welfare of 20,000 students to worry about. You’re expected to maintain “good working relationships” with an illustrious bunch of people, including the Student Support Manager, Queer Support Coordinator, Public Health South, the Dunedin Community Law Centre, the Uni’s Director of Student Services, the Director of Student Health,, and your mum and dad. Despite the long laundry list, the position is one that you can really make your own. 20 hours per week.

You do actually have to be a postgrad to stand for this position, and being foreign seems to help. Being old helps too. You’re basically around to make sure that OUSA gives more of a shit about postgrads than Critic does. You sit on the Uni Senate, and you’re supposed to be best buds with the Director of Graduate Research. 10 hours per week.

Again, you actually have to be an infidel – sorry, foreigner – for this role. Like the Postgrad rep, you’re making sure that OUSA remembers that there are actually international students at Otago. You sit on the International Cultural Council and the Education and Welfare committees, and generally represent foreigners. 10 hours per week.

If you’re quite a fan of the ol’ clubs and societies then this is probably the job for you. It’s a busy job, as clubs and their members are always hitting you up for grants and financial support, and you sit on the Recreation Committee, Grants Committee, Blues and Golds Panels, and the affiliated Clubs Council, whatever the shit that is. 10 hours per week.

Who doesn’t love freshers, right? The weird thing about the Colleges rep is that they should probably be a fresher, but can’t be, since next year’s freshers aren’t actually at uni yet. The lucky winner gets to sit on a few committees and basically make sure that freshers are getting their fair share of shit from OUSA. Since they get Orientation put on for them, they’re pretty sorted. But anyway, it’s a cool gig. 10 hours per week.

Last but not least is the Campaigns Rep, who takes responsibility for the publications, campaigns, and initiatives that OUSA takes on each year. If OUSA wants to get out a “Stop Puffer Jackets” campaign, you’ll be leading the charge. You sit on a couple of committees, and help out with organising events and such. It’s pretty sweet. 10 hours per week.