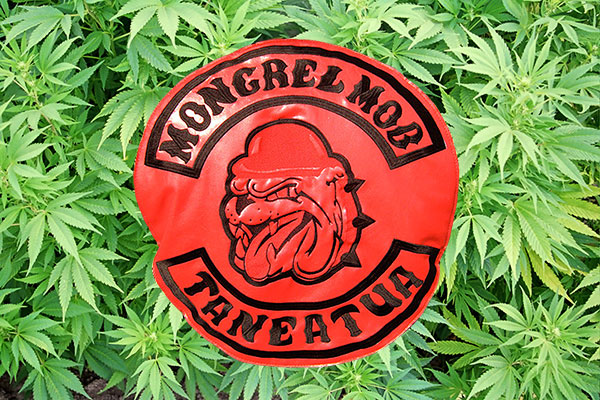 The Mongrel Mob are due for a stern slap on the wrist after being accused of having their fingers in too many pies. Police allege that Mongrel Mob members obtained money from a government funded anti-violence program, run through the Whanau Ora scheme, and used it to buy cannabis.

Over a four-month period earlier this year a Police investigation intercepted phone calls and text messages from 10 men, who were subsequently arrested. Five of the men are patched Mongrel Mob members, and one is a gang associate. The parties allegedly used $20,000 from the We Against Violence Trust to buy and traffic drugs from the North Island to the South Island. Four of the arrested men have been charged with conspiracy to sell, and four have been charged with dishonestly converting the trust’s money.

In the series of messages and phone calls, one man said that he “had it sorted, as he was going to use the Whanau Ora money” and that he intended to “come straight back south”. The next day, $10,200 was transferred from the trust’s bank account into the personal bank account of one of the accused. Police intervened in March, apprehending three of the accused on the Cook Strait ferry. A subsequent search of the accused’s van produced 3.15kg of cannabis with a street value of $24,500.

On August 1 in the Dunedin District Court, 26-year-old Mongrel Mob member Michael Logan Wong-Tong admitted to putting his tong in the wong account, pleading guilty to a joint charge of conspiracy to sell cannabis. He will be sentenced on October 7.

The We Against Violence Trust, founded in 2001, was given money by Whanau Ora, a taxpayer-funded program that aims to “establish regional panels to ensure it contributes in positive and realistic ways to local communities”. The Trust has a $45,000 contract with Whanau Ora to work on community support and reducing inter-whanau violence.

Minister of Maori Affairs and Minister of Whanau Ora Tariana Turia expressed delight at the progress of the We Against Violence Trust in May, before Police revealed information about the investigation. Turia told the ODT, “My understanding is they’ve done some excellent work in the area of whanau violence and getting rid of P [methamphetamine].”

It is still unclear how the accused gained access to the funds. Dunedin police involved in the investigation were unable to comment further, as the case is still before the courts.

Critic suggests that defence counsel run the argument that fostering an increase in marijuana consumption was in fact part of the Trust’s grand plan to steer people away from violence and towards more edifying activities such as watching Aqua Teen Hunger Force and eating GrainWaves. This defence has a reasonable likelihood of convincing a jury, given the precedent set by David Bain’s successful use of the “newspaper run” defence.
This article first appeared in Issue 20, 2012.
Posted 5:14pm Sunday 12th August 2012 by Bella Macdonald.