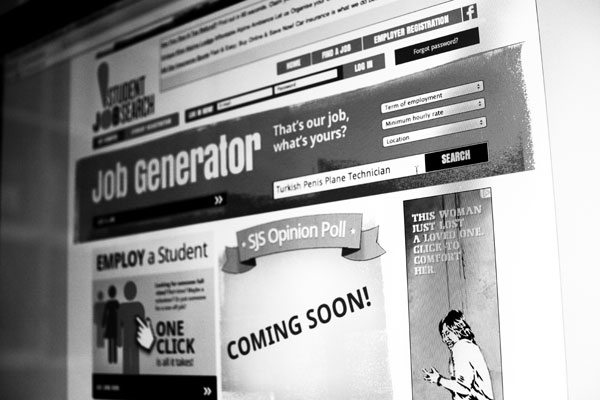 “Find your own jobs, you lazy bums” – SJS

Figures released by Student Job Search (SJS) this month reveal that while students who have jobs are working more hours and earning more money, it is more difficult for those students looking for jobs to gain employment through the student job matching service.

The number of Dunedin students being placed in jobs decreased by 19.2%, with 1,314 students receiving employment through SJS in the first four months of 2012, compared to 1,626 in the corresponding period last year. Nationally, SJS reported only a 5% decrease in the number of students it was placing in jobs. SJS Chief Executive Paul Kennedy said this was due to an employer who had listed hundreds of one-off jobs with SJS last year no longer requiring workers this year.

Otago University Student Association President Logan Edgar told the Otago Daily Times that, “the numbers show more students are signing up; we just need more businesses and the public to get on board.”

The figures also show that those students in employment are in a better position; the average earnings of students who find jobs through SJS have increased by 60% to just over $2,000 per annum.

Paul Kennedy recognised that this would not be of comfort to all students, with “anecdotal evidence” suggesting that short-term jobs were important for students in financial difficulty. A second year law student who spoke to Critic agreed, lamenting that that he was unable to find a job anywhere in Dunedin and was having to “work his arse off” in the mid-semester break to keep himself stocked up on two-minute noodles for the rest of the semester.

Edgar, who also sits on the SJS National Council, sympathised with the plight of unemployed students, and said that both OUSA and SJS are doing all that they can to increase their chances of employment. “Due to the cost of placing a job for SJS, the odd sort of jobs that scarfies love have unfortunately been pushed a wee bit out of the picture. That’s not to say you won’t find them on our amazing new SJS website, it’s just that there’ll be fewer of them. However there’ll be more jobs that you’ll tend to hold on to for longer and therefore bring you more coin and also get quality references from. CV building sort of shit.”
This article first appeared in Issue 12, 2012.
Posted 7:58pm Sunday 20th May 2012 by Margot Taylor.