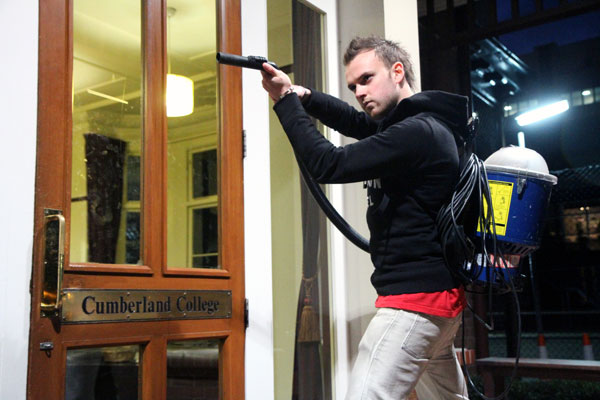 Who You Gonna Call? Greg Hughson!

Cumberland residents have been sleeping with the lights on and sharing rooms after multiple sightings of a ghost known as the “Grey Lady”.
At 1am on Tuesday May 8 two female Cumberland students encountered the ghost as they made their way to a laundry on the college’s first floor. According to a resident, the students “smelled something weird and turned around, and saw this massive figure in the middle of the hallway. It was dark, and glowing at the bottom.” There have reportedly been “multiple sightings” of the ghost, including by “the kitchen staff and at least one RA”.

The story of the ghost of the Grey Lady derives from a tragedy rumoured to have taken place at Hayward College in its previous role as a maternity hospital. According to local legend, a young mother died at the hospital soon after her baby was taken from her due to her being deemed an unfit mother. The woman’s ghost contined to haunt the nurse who removed the baby, who lived next door at Cumberland, which was then a residence for nurses.

In an attempt to restore calm among residents amidst the “hysteria”, Cumberland College called in some outside talent. On the morning of Thursday May 10, University Chaplain Reverend Greg Hughson and a local kaumātua visited the College to lead a prayer and bless both the area and freshers of Cumberland, in order to “reaffirm the presence of God” in the College. Speaking to Critic, Hughson stressed that this was not, repeat not, an exorcism.

Pranksters have been taking advantage of the climate of fear by “fucking with people, rattling doorknobs and stuff, trying to freak people out. It’s working pretty well” said a Cumberland resident. Another resident Critic spoke to was too scared to sleep alone after the ghost sightings, and sent a text message to her friend saying how “freaked out” she was. She did not want to be identified by name, presumably fearing retaliation from the Grey Lady.

This is reportedly the third time Reverend Hughson has dealt with ghosts during his time as Chaplain. Reverend Hughson requested that the issue be treated sensitively rather than sensationalised, and although this reporter fully intended to utilise the phrases “utterly petrified”, “sheer terror”, and “it’s only a matter of time before the ghost possesses a resident”, Critic Editor Joe Stockman cut out all the best adjectives due to concern over Critic’s legal liability for trauma counselling bills.
This article first appeared in Issue 12, 2012.
Posted 7:58pm Sunday 20th May 2012 by Callum Fredric.