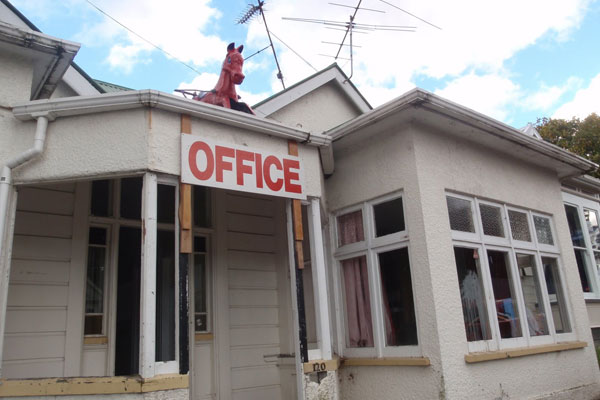 Second-year students living in the scarfie quarter have reportedly been stalked by first-year students declaring their love for flats such as “the Cuntry Club”, “The Eight Man” and “the Piss Stain” and seeking tours as the annual freshers attempt to lock down their second year accomodation as early as possible.

Critic has heard rumours that the Proctor’s office has been inundated with cases of first-year students called in for harrassing inhabitants of the Castle Street area while they sit down to watch The GC with a bowl of Mie Goreng.

Masters of University halls and Otago University Students’ Association campaigns have discouraged first-years from searching for flats too early, citing an increase in demand for flats as a factor in landlords’ unreasonable rent hikes.

It seems that this demand is only being felt by a limited number of landlords, with more flats than usual up for sale this year. This increase is believed to have been partly fuelled by landlords whose flats have remained vacant through January, February and March, with a handful still vacant last week.

Students usually start signing up for flats towards the end of the year, and agree to year-long leases from January 1. However the small but significant number of flats that have remained vacant has left a number of landlords unable to cope with the unexpected loss of income, forcing them to put their properties on the market.

OUSA president Logan Edgar says the sale of flats is probably due to supply outstripping demand and that, “because there were more vacant flats for longer, this year would be a really good opportunity to tilt the balance the other way in favour of students.Wouldn’t it be amazing if this was the year landlords knocked $20 off the rent per room, because students held the negotiating power?”

With first-years heading to Castle Street in droves to stake their claims on flats, this $20 reduction in rent has little chance on succeeding in North Dunedin. However, Edgar continues to hold out hopes for Corstophine, Kaikorai Valley and Pine Hill.
This article first appeared in Issue 11, 2012.
Posted 7:08pm Sunday 13th May 2012 by Imogen Whyte.