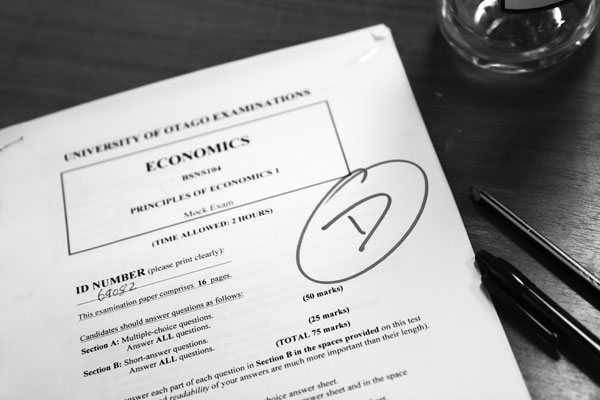 The University caught fewer cheaters than usual in 2011, with figures released by under the Official Information Act showing that cheating and plagiarism incidents have dropped at six of New Zealand’s eight universities over the past year.

Of the 19,500 full-time students at the University of Otago only 61 were caught cheating in 2011, with domestic cheaters outnumbering international cheaters by 47 to 14.

A University spokesperson noted that despite the decrease in cheating bewteen 2010 and 2011, these two years represented an overall increase in the rate of cheating on the three years prior to 2010. “This might be because the use of the originality-checking software, SafeAssign, introduced in 2010, increased the rate of detection.”

The methods of those caught cheating included hiding notes in toilets during exams and inappropriate use of iPhones. One particular student even tried to buy a pass mark from their lecturer. However the University spokesperson noted that bribery was not a common form of cheating. “Attempts at bribery would be exceedingly rare. Dishonest practice in general is a concern and teaching and supervisory staff are always mindful of its existence, both in internal assessment and final examinations, and use a variety of methods to detect it.”

Cheating, or “dishonest practice”, is dealt with seriously by the University in accordance with the Discipline Regulations. Suspension can occur for high-level offending. Other offenders can be fined, forced to resit exams, or have marks for a paper cancelled.

The University acknolwedged that the changing nature of cheating provides a continual challenge. “There has not been any obvious change in the way students try to cheat over the years apart from perhaps the influence of changing technologies. There have always been, and continue to be, unusual and inventive practices.”

A number of practices falling into this category have been relayed to Critic, including notes being written on upper legs or concealed under hats during exams and calculators being programmed to store helpful hints. One particularly “inventive” incidence of cheating went undetected when a first-year Cumberland student wrote a report for a management exam and concealed it on a sanitary pad. No details were provided on what mark these efforts gained.
This article first appeared in Issue 10, 2012.
Posted 12:51am Monday 7th May 2012 by Imogen Whyte.