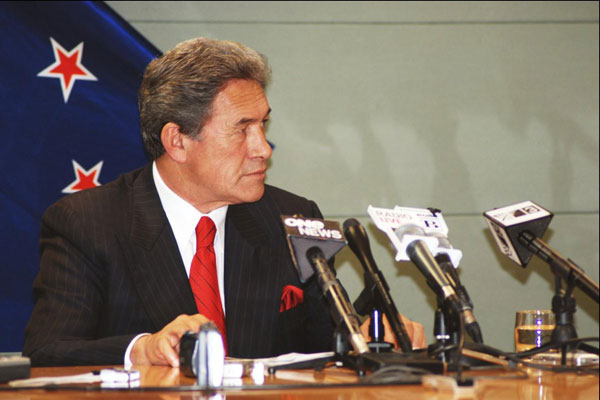 The New Zealand First Party is the Salmond College of political parties – far enough away from the mainstream to be forgotten by most, but not quite far out enough to gain notoriety like the Mana Party (Aquinas). For the average Kiwi, only one thing springs to mind when they think of NZ First ... the charismatic leader Winston Peters. Critic loves to inform, so we talked to the Leader, and Troll-in-Chief, of Young NZ First, Curwen Rolinson, as well as “de facto Leader of Young NZ First Dunedin” Beau Murrah, about the policies behind the pinstriped suit and the smile.

Winston Peters started out as a National MP, but his old-school conservative views meant he was never a fan of the free-market reforms and welfare cuts National implemented in the ’90s. He spoke out against his own party, gained a reputation as a maverick, and was eventually expelled from the National caucus in 1992.

Rolinson says: “We were founded in 1993 because neither of the ‘big two’ parties were listening to New Zealanders about the disastrous impacts of their runaway Rogernomics and Ruthanasia programs.” Since its formation, the party has only been out of Parliament once, from 2008 to 2011. But despite being written off by everyone (to the betting-related detriment of yours truly), NZ First surged triumphantly back into Parliament in the 2011 election with 6.6% of the vote, entitling them to eight MPs.

The mainstream media tends to stereotype the reporting of minor parties. For NZ First, stories would focus on the party’s popularity with old people, Winston’s love of the “baubles of office”, and Winston’s reputation as a maverick. Does Winston Peters have any genuine ideological views? It’s hard to say. But there’s no doubting the sincerity of the young activists currently involved with the party.

As Murrah says, NZF’s founding principle is “to put New Zealand and New Zealanders First.” NZF is sceptical of the notion that foreign investment, trade and immigration benefits NZ, believing the benefits of lucrative trade deals with other nations are outweighed by the restrictions these deals place on NZ’s economic sovereignty. Rolinson says: “We want New Zealand’s laws written by Kiwis and for Kiwis – not by Warner Brothers executives or shadowy international trading blocs.”

Rolinson succinctly describes the party’s ideology: “We are, in a word, Nationalists. We want Kiwis to rise up and take ownership of their nation and destiny … we are far better able to take on the world and win when we are united rather than needlessly divided.” The party wants to deliberately foster a sense of national pride in schools.

NZ First also has a populist/direct democracy streak. According to Rolinson, NZF opposes situations in which “121 MPs get to pre-empt the will of the people,” and would support binding referenda on contentious issues like gay marriage.

Another way to describe NZF is as a conservative party in the true sense of the word. Most of their time in Parliament has been spent opposing changes proposed by the government of the day. When National is in power, NZF opposes welfare cuts and asset sales. When Labour is in power, NZF opposes social policy changes. NZ First tends to receive a significant number of “protest votes” from people wanting to ensure a strong opposition in Parliament. Rolinson: “Ultimately we’ve been put back in Parliament to keep this government accountable.”

NZ First vs. the Media

Particularly in the last two elections, the mainstream media has given little genuine airtime to NZF. The little coverage that existed was usually negative, with a constant focus on polls showing the party struggling at 2-3%, repetitive lazy jabs at the old age of NZF voters, and a negative focus on the antics/scandals relating to Winston himself.

Murrah: “One of the most basic media filters that exists is what media organisations choose to cover or not cover. NZ First gets filtered out to a significant degree.” It doesn’t help that Winston “has always had a pretty antagonistic relationship with the media”. Rolinson agrees: “Before the election, Winston-baiting was an amateur sport with the press corps!” However, he believes the media coverage since the election has been more positive.

Murrah claims he “will be drinking whiskey with Winston sometime later in the year. If he comes to my flat for drinks I will invite everyone I know on Facebook except maybe ACT on Campus.” Meow.
This article first appeared in Issue 5, 2012.
Posted 4:26pm Sunday 25th March 2012 by Callum Fredric.