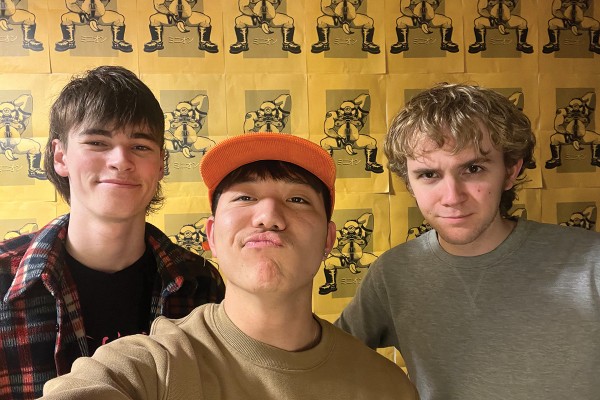 So THAT’S where all the Critics went

Last week, Critic Te Arohi was sent a Snapchat of a student’s room. It was covered wall-to-wall with the Minion Daddy centrefold from our sex issue. Interior design experts Josh and K stopped by to explain their life choices.

Josh and K are both first years at Aquinas. K had just moved into a new room, but was saddened by its blank, empty walls. Ever the loyal friend, Josh had a solution to cheer up his morose mate. While K was sleeping, he conscripted a friend to head downstairs, grab “30 or 40” Critics, take out the centrefolds, and stick them to the wall above the (still soundly-asleep) K.

K awoke to the sight of 40 jacked minions, banana dongs on full display. But he was okay with this. He was so okay with this, in fact, that Josh, K, and their mate Liam brought home another 60-or-so magazines that very night, after a late night feed. They quickly formed an assembly line, with “one of us ripping them out, another one putting on the Blu-Tac and the last one putting it on the wall”. The whole process took about 40 minutes, and the boys reckoned it taught them more about teamwork than any lecturer’s ice-breaker activity could ever hope to.

But now they faced a different problem: upwards of 70 Critics with no centrefold. So they did what any sensible first-year would do, and hid every single copy in a different person’s room. “The thing with Critic”, said Josh, “is that when you have heaps of them, they really smell like paper. So we thought it would be funny for people to be like, “Why does my room smell like paper?” K said his room “still smells like toilet paper”, wafting down from the hundred-or-so pages of Minion Daddies above his head. He also reckoned that their raw, sexual energies were also fucking with his sleep quality, with their intensely distracting libidos giving him “some rough sleeps recently”.

Now, with one wall complete, K is looking forward to his mum and missus visiting Dunedin for the first time next week. He was adamant that “We’ve gotta leave them up, yeah,” and has been pondering how his family would react. “With my mum, I reckon it’s gonna be like, ‘What’s wrong with you?’. The missus, I dunno. She’ll probably hate me for a little bit, but hopefully she likes it, because I like it.” K insisted to Critic Te Arohi, for the record, that the wallpaper was not there to transform the room into a minion sex dungeon. “It’s just my room, man”, he said. Critic isn’t sure if that argument will stand up in court.

The Minion Daddy centrefold proved to be a success, with more requests coming into the office for copies of the magazine than any other issue this year. Perhaps this had something to do with the fact that the prized centrefold was tough to find – especially since 100 of them are now gracing K’s room in Aquinas. The boys said they had no intention to create false demand, but also had no intention to cash in on any of their prized decor. And they’re nowhere near finished. If Critic Te Arohi printed more, they said, “We’d just come get more copies… there are still three walls to cover.”