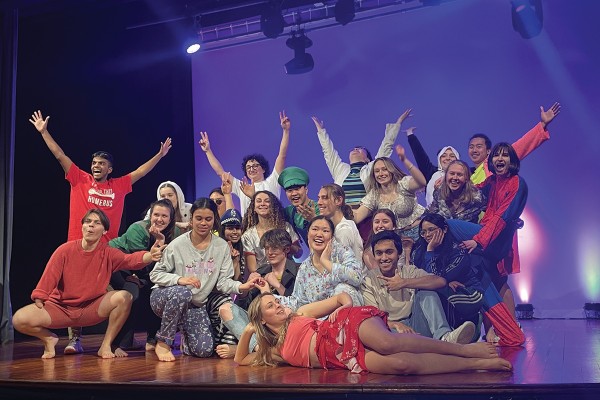 Peeking Behind the Med Revue Curtain

The annual Med Revue took place last weekend, drawing med and non-med students alike for three nights of theatrical antics. “Charlie and the Doctor Factory” gave students their money's worth with three hours of skits and choreographed song and dance. And as a bonus, most of the jokes didn’t require a Health Sci A+ average to understand.

Critic Te Arohi sat down with Josh, Med Revue’s producer, in the week leading up to showtime. Josh stressed that, “[Med Revue] is not just for med students, it’s for the whole community.” Contrary to popular belief, med students can actually joke about non-med related things, although these seem to largely revolve around sex. “There's a joke for everyone in the show,” said Josh.

Josh told Critic Te Arohi about the “bond” that had formed amongst the Med Revue cast. “You become super tight with the cast; we hang out with each other apart from rehearsal which goes to show how much we love each other.” Persistent rumours that Med Revue is a cult are not entirely unfounded, according to those we spoke to. Cast member Ben told Critic Te Arohi that “It’s a cult that doesn’t hurt anyone. Once you join you come back as directors and producers [in third year] … you can never leave.”

Another cast member told Critic Te Arohi that it is “better” when there are fewer med students in the audience. Despite this, the attendees seemed to be mostly made up of med students. We only managed to talk to one non-med student in the audience, a Health Sci who was presumably attempting to scope out their future cohort. Nevertheless this didn’t stop most of the laughs coming from sex jokes, rather than the more niche med-related humour in the show.

Med Revue attracted some criticism in 2021 for marginal jokes, which forced its organisers, the Otago University Medical Students Association (OUMSA), to issue a public apology in Critic Te Arohi. This didn’t deter its script writers from progressing some pretty marginal chat this year, though, with topics ranging from euthanasia and abortions to “Mother Russia” and, indeed, last year’s apology (which was referenced three times in the show). Molly, who as last year’s OUMSA President was responsible for the apology, said she felt the satire in this year’s Med Revue “hit the right chord.”

Med Revue is entirely run and performed by 2nd and 3rd year med students. Like med school, it’s a process that looks so gruelling and miserable that outsiders struggle to figure out why anyone would put themselves through it. According to Josh, “We started prepping as soon as last year's show had finished.” Since the start of Sem 2, rehearsals were scheduled every weekday from 6-10pm, with full 9am-6pm days on weekends. This is, of course, on top of everything else in med school. “A lot of work goes on behind the scenes that you don’t see,” said Josh, “but it’s good fun.”

Unsurprisingly, our old friend Covid also caused some difficulties for Med Revue. “There have been big scares of the cast getting Covid in the week leading up to the show but we’ve been taking measures [to get around this],” said Josh. In the end, not even Covid could stop these dedicated med students from continuing a time-honoured tradition of doing something other than studying.

In another time-honoured tradition, the cash from Med Revue all goes to charity – this year, it’ll be sent to Able Minds, a local charity that helps with mental illness, alcohol and drug rehabilitation, and family support.