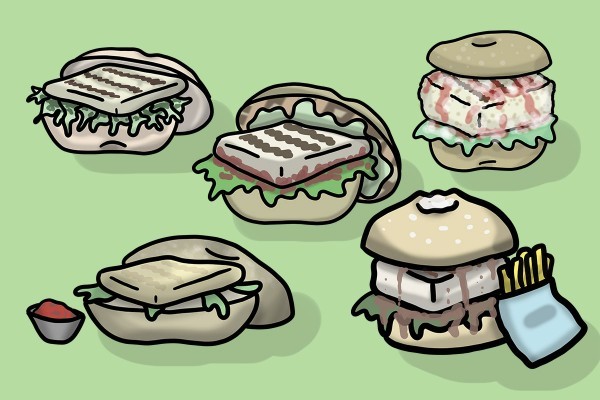 Burger Plant, the vegan burger joint on Fatty Lane, has just changed owners. Critic Te Arohi spoke with Tom, the previous owner and a culinary arts Polytech student, to get to the meat of the issue.

What is now Burger Plant began with a little setup at the Farmers Market in 2019: “$600 worth of ingredients, a little gazebo and a BBQ”. Little did Tom know, he had struck vegan gold. Before he knew it, he had transformed a market stall into an established business, which opened in March 2020 – just before the first lockdown hit. Critic reported about this in Issue 4, 2020.

The vision for Burger Plant has always been to make vegan food more accessible and normalised, while “not being in your face about it”, said Tom. This laid back approach to veganism, he says, was designed to “not scare people away from giving it a go”. Despite students' give-it-a-go attitude and their increasing openness to plant-based alternatives, their general lack of disposable income meant running a student-focused business can be tough at the best of times. The chaos wrought by Covid-19, from lockdowns to staff shortages and inflation, didn’t help either.

Despite these challenges, though, Tom was upbeat, saying that it was a “good few years but it definitely was not easy”. “Any business that survives through Covid,” he said, “is in my eyes a success.” Ultimately, Tom’s decision to sell the business came down to wanting to start a new chapter. “It's a bit sad for me because it's my baby … [but] I want to kind of just take it chill and be 23 again, and not feel like I'm in my mid 30s,” he told Critic Te Arohi.

While Tom will not have any involvement in Burger Plant from now on, he reassured his customers that the “business is in good hands”. In a rather wholesome Facebook post on 6 July, the new owners said that: “After a few days of learning we believe we can continue to operate this store…  please don’t worry, all dishes will be vegan.” New menu items are also being rolled out, including deep-fried spring rolls and wontons. While they’re technically not burgers or plants, we vegans take what we get, I guess.

Customers we spoke to said they had not noticed changes in the quality of food since the ownership change. Lucy, a student, described the That Fungi burger as “soggy but tasty,” though the sogginess might have been due to the recent torrential downpours. Meanwhile, Finn’s mum had a more scathing critique, saying, “[the burger] tasted like they deep fried a vegetarian sausage.”

Critic Te Arohi reached out to the new owners for comment, but did not get a response in time for print.