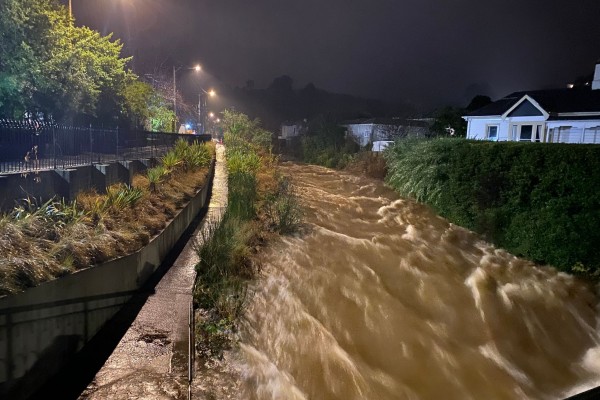 “Hit the Leith, wapuah, drop down say wahhhh, and get pitted, so pitted”

While students across North D were busy hunkering down during last week’s storm, two looked at the waves of the Leith and saw something else: a mid-winter surfing opportunity. They promptly chucked their wetsuits on, rented Unipol boards, and hit the eddy just near the Clyde St bridge on last Wednesday morning. Critic Te Arohi spoke to them to figure out just what was going on inside their heads.

Toby and James’ plan began on Tuesday night. Somehow, where everyone else saw a teeming mass of stormwater, Speights bottles, and old Lime scooters rushing out to the ocean, they instead saw surf worthy of a Hawai’ian postcard. There and then, the pair made a plan to hit the surf early the next morning, to “avoid publicity”. However, like most students, getting up early wasn’t James and Toby’s forte: “By the time we started surfing,” said James, “everyone was out, so it was probably the worst time to go”.

The whole decision was “pretty spontaneous”, said Toby. “We thought it might be fun, and it was.” The surf itself wasn't actually that spectacular. “If you saw those waves in the ocean you would be pretty bummed, but it was more about the novelty of it,” said James. They managed to enjoy the surf for about an hour and half before the cops arrived and advised them to stop. While the Otago Daily Times dramatically reported that the cops “firmly recommended” that the pair stop, Toby told Critic Te Arohi that “They were super good about it.” The pair insisted, though, that despite being talked to by the cops, “Surfing is not a crime.”

The only downside from the escapade was Toby breaking, and needing to pay for, the fin off Unipol’s board. Word of their impromptu adventure spread quickly, though; by the time the pair headed to Unipol to return their boards and pay for the damaged fin, they were being recognised by the staff there. “They were laughing about it,” the boys recalled. Hopefully laughing with them, and not at them.

Toby and James’ surf ended up garnering national media attention, being picked up by the ODT, Stuff and One News amongst others. Pictures of their adventures also spread quickly through the Internet, including boomer hangout space Dunedin News. There, opinions seemed split between the two wolves that live inside all boomers: the outraged commenters baying for “natural selection to run its course,” and others congratulating the pair for being “out there doing it rather than surfing on their phones” while condemning the “fun police” for good measure.

Rather sensibly, Toby and James don’t recommend this to anyone who is new to the sport. Especially with the river running so fast, Toby said, “There is no way you could paddle against the current, you had to ride it out to the side.” However, despite drawing heaps of media attention, earning a talking-to by the cops and copping social media scandal, both unanimously told Critic Te Arohi that they would do it again.