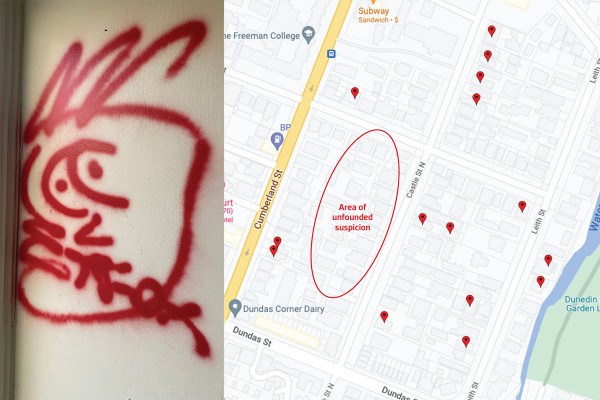 Several Castle St flats have been broken into recently. Unlike most break-ins, nothing was taken: instead, they’ve received an unwanted interior design makeover, with a face being spray painted on the inside. The culprit is still at large.

On the Saturday night of Re-O Week, the residents of a Castle St flat were sleeping soundly. Well, all of them except for one restless soul, who let in their late-night booty call around 2am or so. The flatmates suspect that these horndogs forgot to lock the door before they got down to business, and it was this fatal mistake which allowed an artistic intruder to take their chance. The next morning, around 9am, a giant spray-painted face had shown up right next to their entryway.

“We were all shocked, and we have no idea who did it,” said Joel, a student who lives in the flat. A noted art aficionado, Joel told Critic Te Arohi that he liked the art, a point of view not shared by his flatmates and landlord. “On the bright side,” he said cheerily, “our landlord is fixing it for free,” which Critic notes is both shockingly generous and also the bare minimum that should be expected from a landlord.

This face, tagged in red and black, has appeared seemingly at random in flats down Castle, Leith, Howe, and Cumberland in the past week. In the last week, Critic Te Arohi have tracked at least 13 affected flats, with the mysterious face appearing everywhere from walls to fences and fridges. As seen on the map, this leaves a suspiciously tag-free area near Castle and Howe. If the perpetrator is trying to put distance between themselves and their dastardly crimes, perhaps this is the place to look.

As of print time, though, our (very real) crack team of criminal investigators are no closer to figuring out the motive or psychology for our trigger-happy culprit. If you’re the one doing the tagging, please reach out to keegan@critic.co.nz so we can psychoanalyse you and your art.