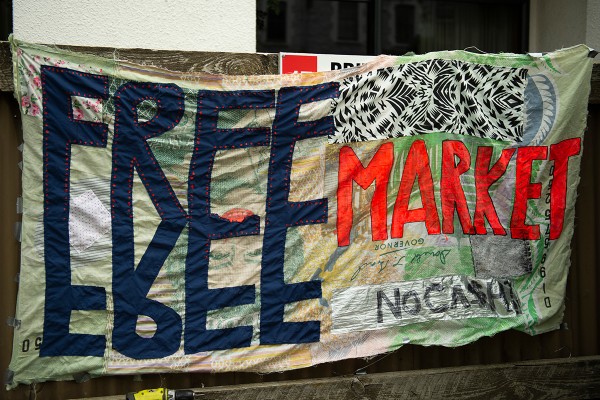 On Saturday 21 May, from midday to sundown, people congregated at 111 Moray Place for the Ōtepoti Festival of Anarchy (or A-Day, as the cool kids call it). Despite the cold, the festival delivered on providing food, music, workshops and free stuff. What more could you ask for? Critic Te Arohi reported from the heart of the Anarchy Festival (and had a blast).

The Ōtepoti Festival of Anarchy was held to “celebrate the radical, demonstrate the beauty of anarchy, shun the logic of the market, share something delicious, build a vibe [and] learn something buzzy,” all while “doing it together.” Stalls and activities were spread around the Crooked Spoke bike workshop and neighbouring Blackstar Books (an anarchist book shop). The irony of such a well-planned, smoothly-organised “anarchy” event was not lost on attendees.

Among the stalls was one selling Sri Lankan street food, made freshly from scratch by the Ōtepoti Possibilities Cooperative, a new anarchist food co-op. In true anarchist spirit, the food was not priced, but you were encouraged to “eat what you like and pay what you feel.” All proceeds went to the Sarvodaya Shramadana Movement, a grassroots community development organisation in Sri Lanka. Critic Te Arohi can confirm that the food was both delicious and nutritious.

Other stalls included the “Really Really Free Market” where you could swap clothes, furniture and other things; as well as a station where you could typewrite an anonymous letter to your landlord or property manager. The Crooked Spoke hosted a dizzying array of musical acts throughout the day, from DJs pumping techno to acoustic ensemble artists. Meanwhile, Blackstar Books ran indoor workshops on topics such as the history of anarchism in Aotearoa, our broken mental health system, how to make OIAs (Official Information Act requests), gender fluidity in mythology, and an introduction to “urban waste foraging” (aka dumpster diving).

Critic Te Arohi interviewed a number of students at A-Day to see what anarchy meant to them. Lydia, who had just finished a Masters in Peace & Conflict Studies, views anarchy as a “way to start rethinking some ways of living life and living in a community [that] we take for granted.” Meanwhile, Karl said the festival provided “a bit of chaos in a world that is too focused on order and structure.”

Critic Te Arohi sat down with Carl (unrelated to Karl), one of the organisers of the festival and member of the Ōtepoti Possibilities Cooperative. Carl saw the festival as “a great way to bring people together,” where people can “have fun, have a good kai and make connections.”

The festival saw a wide range of people and demographics. “There's people [here] who identify with anarchy as an ideology and there's people here who see the poster and think it sounds buzzy so come along and there's some who get amongst because they’re curious about anarchy.”

At its core, Carl views anarchy simply as “self reliance, but on a group level… [It’s about] getting together with people and doing shit that you wanna do without regard to power structures or appeals to authority. It’s about trying to meet our community needs, ourselves. It’s about demonstrating that we can do it ourselves (plural).”

Anarchy is deeply interconnected with radical intersectionality. “Because anarchy is grassroots you can’t ignore anything, so you have to create a social space that is accommodating for everyone and I think intersectionality comes naturally to those spaces,” said Carl. As such, Carl said, that “privilege shouldn’t be shied away from and nor should oppression be wielded as a way of gaining power over another.”

Carl said that the radical language used was deliberate, with organisers wanting to avoid changing “our language to suit what’s more comfortable. I think a lot of organisations might hold wanting capitalism to end as some value but won’t talk about it publicly because it’s not palatable.” However, there is no misconstruing of the language or intentions of “Anarchy Day”. Meanwhile, “we’ve chosen to use the term ‘anarchy’ as opposed to anarchism to focus on anarchy as a process and a way of doing things anarchically, as opposed to anarchism as an ideology,” said Carl.

Lydia said that the vibe was “very chill and friendly in a sleepy Saturday relaxed way.” “It almost makes me feel like I’m travelling again because you get to explore something out of the ordinary, so it adds a little adventure to our normal Saturday,” said Rebecca.