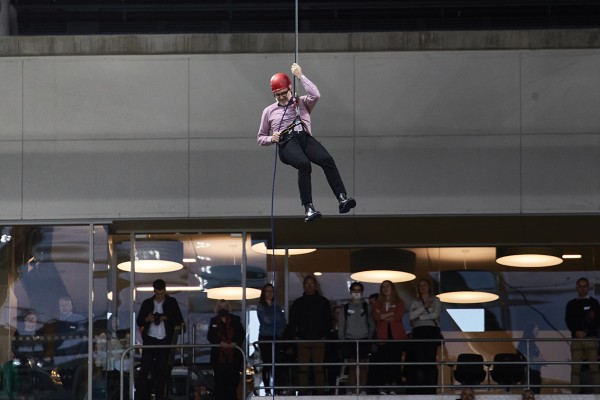 New Vice-Chancellor Hanging by a Thread

David Murdoch abseils down the stadium

Vice Chancellor David Murdoch strapped in for a 35m abseil down the Forsyth Barr Stadium on 17 May. The ‘Toss the Boss’ event was hosted by the Malcam Trust to fundraise for their youth development mahi in Dunedin.

David was one of dozens of local bosses taking the plunge, and his time slot was early: 8am. This was presumably because, as an alternative to caffeine, David prefers to start his days with a hit of adrenaline. He was stoked to be a part of the event, saying that: “The fact this is something I enjoy, along with the fact it was for such a worthy cause, meant this wasn’t a difficult decision at all.”

For anyone looking to spook the new VC, heights may not be your best bet. David said that he wasn’t particularly bothered by heights, “so long as I’m securely attached to something, of course!” He’s abseiled and parachuted before, so he said he was “looking forward to this”. He even took the time on his descent to admire the architecture of the stadium, which is exactly what we would expect an erudite professional like David to do. “Seeing the stadium from that angle was quite the privilege also – it’s impressive from the grandstand, but it’s even more so from above,” he said.

The Malcam Trust “supports ākonga who don't know what they want to do and are not ready to know what their skills and aptitude suits best in life,” doing so by providing opportunities for growth and mentorship. Funds raised by David’s stunt will go towards facilitating these programmes across the Dunedin and Clutha regions. David said that “The Trust does extremely valuable work and has very similar beliefs and aims to the University – we both work to empower young people and believe that they can make a difference.” Critic reckons that next time, David should up the ante by abseiling down Richardson.