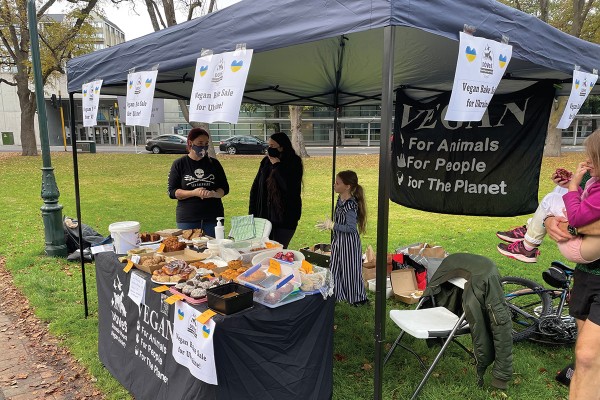 Veganism is your god now

On Saturday 7th May, the Dunedin Ōtepoti Vegan Society (DŌVeS) held a bake sale for Ukraine on the Museum Reserve. What link does veganism have with Ukraine and what does buying baked vegan treats achieve? Critic Te Arohi went along to find out.

DŌVeS originally hatched the idea of a bake sale as part of a nationwide effort to further an initiative run by Shawn Bishop (who runs an Animal Sanctuary in Matakana) to raise money for “struggling animals and vegans in Ukraine”. A Givealittle page, set up by Shawn, to evacuate animals and bring food to animal shelters across Ukraine, has raised over $4,000. Veronika Fedosova-Tsybulska, a Ukrainian and recipient of the animal fund, said that 21 dogs and a cat were evacuated from the city of Mykolaiv as a part of the effort. “The vegan community around the world has the best religion - the value of every life: human and animal,” said Veronika.

A fund has also been created to provide vegan Ukranians with vegan food, however it is less clear on how the money gets used. “A lot of the food part of the humanitarian effort [in Ukraine] has been non-vegan,” said Chelsea McGaw, member of DŌVeS. “Half [the money] is going to feeding the animals and [the other half is] going to feeding the vegans,” Chelsea said. Carl Scott, president of DŌVeS, said the aim is to “assist like-minded people in another part of the world, who urgently need our help”.

Despite the cause being well-intentioned, a certain amount of privilege is embedded in a vegan lifestyle, a privilege which people in a wartime environment can’t really be expected to afford as they’re faced with the necessity of surviving day to day. “I think it becomes a really hard ethical choice for people to follow their beliefs or needing to eat, of course,” explained Chelsea. Chelsea further explained that the fund was to help alleviate some stress from people who were already living in highly stressful situations, adding that “some of them might be vegan for health reasons.”

The bake sale came just before a rally for Palestine to commemorate the Nakba which initiated a 74-year long illegal Israeli occupation of Palestine. When asked about the rally, Juanita Bielecki-klnx, member of DŌVeS, said that they’re willing to support any cause. Though, “any cause” might mean any cause with vegan outreach.

Ultimately, DŌVeS described the bake sale as a “success”, raising around $200 after just an hour, with most donations coming from parents of graduates (who actually have money to make donations). Jowan answered the crucial question of value for money:  there were “very big portions”.