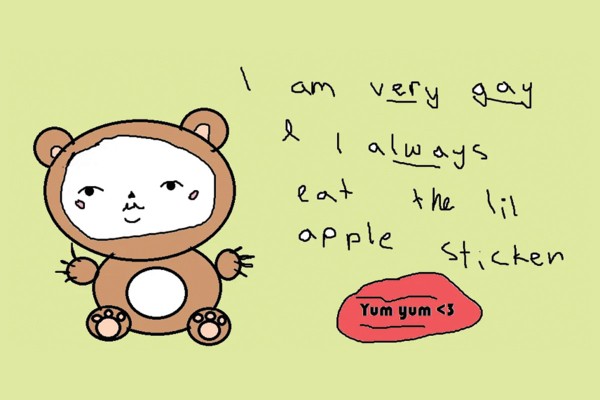 All five entries were great, apparently

For Art Week, UniQ teamed up with Art Club to host a painting competition. Well, a Microsoft Paint competition anyway. In a beautiful and rather wholesome twist, all four people who entered came out winners.

UniQ, Otago’s resident club for members of the LGBTQ+ community, decided that 2022 was the year for their first annual MS Paint competition. Some of the exec members pitched in to draw up posters advertising the competition, including a reimagined ‘Birth of Venus’ in glorious pixelated brushwork, a multitude of frogs, and a depiction of beloved gay paradise ducks Bill and Bill, under the caption: “What if we kissed in the Leith under the clocktower?” What if, indeed.

Unfortunately, these stellar efforts couldn’t quite get those artistic juices flowing as planned. UniQ only received two entries before the competition closed, and both just ahead of the closing date on the 3rd of May. Including the latecomers, five entries were received in total. Sam, a UniQ exec member, told Critic Te Arohi that the whole ordeal was “hilarious,” as well as “vibes, honestly”.

MS Paint appealed as a medium because of its simplicity, she said: “With the state of the world as it is, everyone has access to MS Paint in some way, shape, or form,” said Sam, “we thought it would be easy.” The aesthetic was also a huge draw, she said, as “[there’s] kinda the nostalgia of having just a really shitty laptop and a jiggly mouse”. On top of that, MS Paint has a certain appeal to queer internet culture. “Shitty MS Paint just has gay vibes,” Sam said. “MS Paint frogs with gay flags is peak queer culture.” You heard it here first, folks.

The popularity of the idea, though, wasn’t quite matched by the turnout. “We had so many people being like ‘this is such a cool idea, we’re gonna enter,” said Sam, but then [our inbox] was just crickets.” Despite this, UniQ took the results in their stride, celebrating a “massive turnout” – the biggest turnout the competition has seen so far. “A couple [entries] were late, as is queer fashion,” said Sam. Conveniently, including the latecomers, four people entered the competition, and there were four prizes up for grabs, including vouchers. Full disclosure: this reporter will be cashing theirs in for a box shortly.

Until the MS Paint competition returns with a vengeance in 2023, UniQ will continue to host regular events for the queer community and its allies, such as QTea, a queer social event held fortnightly in Clubs & Socs (coming up on May 27). UniQ is also working with Dunedin Pride, the Rainbow Otago Medical Students’ Association, and Queer Support to host sexual health workshops every Wednesday at 1pm in the Queer Space. The “ultimate collab,” according to Sam, will be the upcoming Sweat with Pride challenge, which will run throughout June. More information can be found on UniQ’s social media accounts and in the Queer Space in the Link.