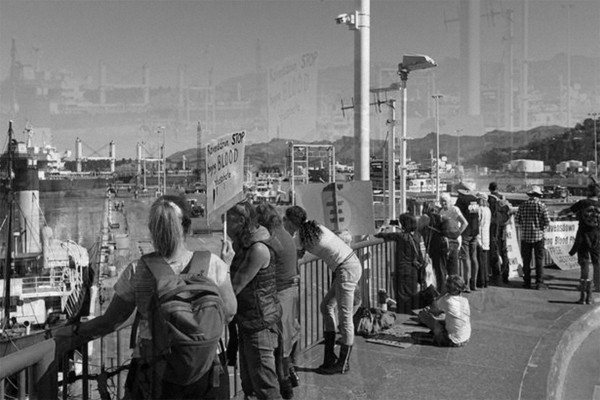 The ship Stony Stream has just landed in Port Chalmers, carrying 25,000 tonnes of phosphate from Moroccan-occupied Western Sahara. This phosphate, which critics call “blood phosphate,” has been linked for decades to serious human rights abuses. Aotearoa is one of the last countries in the world that still buys it.

To understand the meaning behind “blood phosphate”, some historical context is necessary. Morocco invaded the former Spanish colony of the Western Sahara in 1975, displacing over 200,000 indigenous Sahrawi people in the process and beginning their 45-year illegal occupation of the region. Despite the United Nations insisting the Sahrawi people have a “right to self-determination and independence”, Morocco has continued to occupy the region, with near-daily bombings since 2020. The conflict has culminated in one of the longest running refugee crises in modern history, with an estimated 200,000 indigenous Sahrawi people displaced to Algeria in the process. These refugees are separated from their families still living in occupied Western Sahara by a 2,500km sandwall, accompanied by millions of land mines and 100,000 Moroccan soldiers. Incidentally, Prime Minister Jacinda Ardern visited these Sahrawi refugee camps in 2008, as President of the International Union of Socialist Youth.

Western Sahara sits on rich reserves of phosphate, widely used as fertiliser. This is mined by OCP, a company owned by the Moroccan Government. Buying phosphate from a government who mines it by illegally and violently occupying someone else’s land is usually a serious ethical concern. But while most countries have weaned themselves off Moroccan phosphate, Aotearoa hasn’t. Our two main fertiliser companies, Ravensdown and Ballance Agri-Nutrients, are OCP’s top customers for Western Saharan ‘blood phosphate’. In fact, they’re the only customers outside of Morocco. In Dunedin, this phosphate is turned into fertiliser at Ravensdown’s factory at Ravensbourne – you can see (and sometimes smell) it on the harbourside walkway.

On March 18, with the Stony Stream about to dock in Lyttelton, the Rail and Maritime Transport Union (RMTU) handed a protest letter to Ravensdown staff in Christchurch. In the letter, the RMTU emphasised their support of the Sahrawi people’s right to self determination, condemned the violation of their human rights in the occupied Western Sahara, and expressed concerns over Morocco’s exploitation of natural resources in the territory.

Ravensdown’s response was that while the UN has so far “failed to find a solution”, they are “satisfied that OCP does comply with the UN framework at this time”. The UN framework has three criteria: firstly, that the operation “promote[s] economic advancement and provide[s] direct and indirect benefits to the inhabitants of the territory and to the territory itself”; secondly, that the “working conditions should be non-discriminatory”, and lastly, that the operations “should be conducted rationally and sustainably to ensure long-term access to resources.” Ravensdown said that as all three criteria are met, they have no problems buying Western Saharan phosphate.

Environmental Justice Ōtepoti has voiced long-standing opposition to Aotearoa’s import of blood phosphate. By continuing to buy this phosphate, EJŌ maintains that Ravensdown and competitor Ballance “financially support Morocco’s brutal ongoing military occupation in Western Sahara”, as well as “profiteering and encouraging deforestation, draining of wetlands and industrial fossil fuel farming which pollutes the waterways and soil”. They claim that these fertiliser companies and the Crown are essentially “double agents of colonisation,” both supporting the colonisation of Western Sahara and abusing their Treaty relationship with tangata whenua through environmental degradation.

Ravensdown had a slightly different take. A spokesperson told Critic Te Arohi that the “complex geopolitical situation” meant that the territory's political status is “undecided”. “The right place to reach any kind of solution for such a complex geopolitical issue is through the UN,” they said, adding that “The industry joins others in encouraging all governments, including our own, to push the UN for progress on this stalemate.” The UN has been firmly opposed to the Moroccan occupation for the last 40 years.

Aotearoa’s ongoing dependence on Western Saharan phosphate, and on synthetic fertilisers in general, is a real worry for EJŌ. A spokesperson told Critic Te Arohi that the climate crisis has demonstrated the need to “develop resilient regenerative agricultural systems that work with the land rather than against it … Ravensdown could upgrade their facilities and choose to source superphosphate that doesn't fund ongoing war but instead they ignore their role.”

While the world has been rocked by Russia’s invasion of Ukraine, this equally-cruel, and much longer-lasting, occupation has been kept largely out of the media spotlight. “It is crucial that we sanction the imperial sovereign interests of Morocco just as we decisively worked to sanction the oligarchal interests of Russia,” said an EJŌ spokesperson.