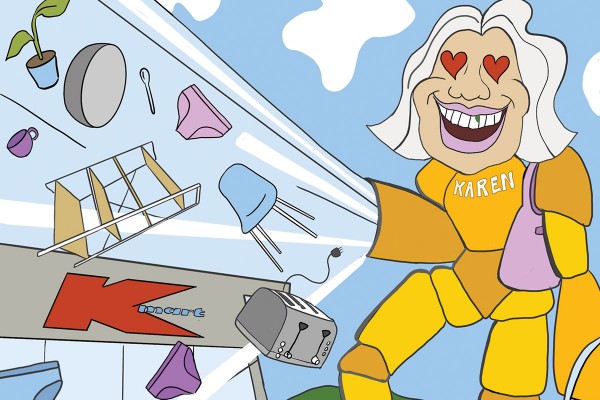 It used to be a rite of passage for students in the new year: the big flat furnishing shop at Kmart in Meridian Mall. Lines of students would hike piles of everything from duvets to dish racks to toasters and toilet roll holders down George Street. Cars overflowing with pillows and vacuum cleaners would snake towards North D, fresh-faced second-years peeping out back windows with their stressed-out parents at the wheel, getting confused about the one-way system.

It was a mecca of abundance in the retail wasteland that was North Dunedin. It was a place where you could go anytime, buy anything, and afford everything. And it wasn’t just students feeling the love either. Ask my former landlady, who on my first flat viewing in 2018 proudly showed off the brand new microwave, “bought only this year” from Kmart. As far as I know, it’s still going strong.

Kmart Dunedin is not still going strong, to say the least. They vacated their space in the Meridian in March last year, amidst complaints about earthquake-strengthening work and whispers about the mall playing hardball with rent. There were rumours of them moving to the old Warehouse store in Rattray Street or heading out to South D, but nothing has eventuated so far.

Eagle-eyed observers may notice Kmart’s responses to Facebook commenters begging them to return has shifted. From the optimistic “We’ve shortlisted a few potential site locations in Dunedin, so we’re hopeful that we will have some good news to share soon <3” (May 28) to a jaded, non-committal “We’ll share this feedback with our team <3” (September 8). Asked for comment, a Kmart spokesperson said they “have no comments re Dunedin”

Stores come and go all the time, but the loss of Kmart hit particularly hard. People continue to message Kmart New Zealand and flood their Facebook posts, begging them to bring their Dunedin store back. Students still lament its loss, shifting boxes of Anko products from their hometowns or driving to Invercargill to get their fix. For a massive retailer which made AU$10 billion last year, owned by an Aussie conglomerate which sells everything from hardware (through Bunnings) to explosive-grade ammonium nitrate, it holds a strange grip on our hearts.

What is it about Kmart that makes it so attractive? I asked my mum, the most reliable retail industry expert I could find. “Their stores seem very bright and clean. And their stuff is quite modern-looking, but also decent quality. It’s nicer walking around there than in The Warehouse and it’s usually also cheaper,” she said. Asked to name a favourite product, she struggled for a while, before finally settling on bedsheets: “Even the more premium stuff is still cheaper than most other stores, and definitely better quality.”

My mates are my second-most reliable retail industry experts. They agreed with my mum’s assessment. “I wouldn’t buy really pricey stuff from there, but the stuff I do get is pretty good quality, better than other places,” Nellie told me. She said the “indestructible” hair-ties were a particular favourite of hers, as were her sunglasses: “My first pair was from The Warehouse, and it fell apart in two weeks. So I got a replacement from Kmart, these ones — they’ve lasted six years.”

For Dunedin students, though, Kmart was more than just a discount store. Nights in North D can be pretty grim: with nearly everything closed, there’s precious little to do except drink and study. That was where Kmart really came into its own. Open until midnight seven days a week, it was a clean, quiet, and pretty much free flat-bonding destination. “Late-night trips to Kmart were always a fave. It was fun to browse around when you have nothing better to do and then just buy some cheap lollies and be on your merry way,” said Hannah. “I like the fun cheap aesthetic of their things. It’s a hella cute store.”

“Kmart has great deals, unethical consumption aside, but mostly you’d go to Kmart for the experience,” Asia told Critic. “My flat would frequently go just to wander around and dissociate under the fluorescent lights, occasionally buying a shitty $0.75 candle.” One of her flatmates chimed in, saying: “I think Kmart has a nice appeal in that every store is exactly the same. It’s just a big empty space with lights that go brrr a little bit. Like a sensory deprivation chamber but with shitty monstera paint by numbers.”

This combination of cheapness and aesthetic niceness is weirdly alluring. Alluring enough, it seems, that people are willing to go out of their way for it. Nellie told me that on a recent trip to see family and friends in Auckland and Palmerston North, she would make an effort to visit the cities’ Kmarts, sending photos to show off to her mates in Dunedin.

At the extreme end of the scale, at least three people I’ve interviewed have talked about going on road trips to Invercargill and Queenstown to visit Kmart. That’s at least a five hour hour round-trip by car. Just for Kmart.

Asia and her flat made one of those pilgrimages, a trip that she would call “spiritual”. Feeling Kmart’s absence keenly, they decided to shoot off to Invercargill. Although their car broke down within moments of departure, “some kindly bogans gave up a jumpstart and aided us on our journey,” which seems a very appropriate way to begin a trip into our Southern heartland. “Walking back into Kmart’s hallowed halls healed my soul,” Asia said. “We made some boring purchases, like a shower curtain and a bath mat, stuff you need but is way too expensive anywhere else for some reason. There was also a sick as fuck lobster line they’d released, which we Dunedinites have been deprived of. We bought a dishcloth just because it had lobsters on it.”

Was the many hours spent on the road to buy from a massive multinational conglomerate worth it? Absolutely, says Asia. “It was a beautiful bonding experience. This was around election time, and we also stole a Judith Collins sign from Milton on the way home, who guards our front door. Kmart brought us — my flat, Judith, and a lobster dishcloth — together. Thank you, Kmart.”

It goes without saying that the sort of non-stop consumption that Kmart promotes can be destructive as hell. Whether it’s the $10 appliances that end up tossed at skip day, the headphones which fail before the year is out, or the oh-so-stylish bookshelves that fall to pieces when you try to move them, their products are not exactly sustainable. None of their stuff is designed to be repairable or even recyclable. You can’t make a profit selling toasters for $9 if the person who buys it won’t need another one for the next ten years.

But it seems that for many we talked to, buying from Kmart wasn’t so much an active choice of rampant consumerism, but a decision made out of necessity. Gina, the (lovely and wholesome) volunteer at the St Andrews Op Shop, said that despite the store being just around the corner from where Kmart used to be, its closure hadn’t exactly caused a spike in business.

“We did get a bit of extra foot traffic after they closed, and people would come in looking for wine glasses and things. But most people who shopped here would go to Kmart as well. It was the only place in town where you could get good-quality things for a cheap price.”

In her telling, the winner from Kmart’s closure wasn’t really the circular economy or the charity sector, but our old mates at the Ware-Whare — “except now you need to have a car to get there, which a lot of people don’t have” — and $2 shops.

So maybe what made Kmart so special was the feeling that you can have it all. No one I spoke to was under any impression that this was some refined shopping destination for high-quality products. Pretty much everyone mentioned the word “cheap” to me at least once when talking about Kmart.

But while it’s a store full of cheap stuff, it’s a nice-looking store full of nice-looking things. As students, we’re used to settling, whether that means paying over half our income for a lousy flat because there’s nothing better, working a shit job because no one else will hire unless you “have work experience,” or seeing politicians screw us over and over again because boomers are the ones who vote. So it’s refreshing to be in a place where, for once, you don’t feel like you have to settle, and where you are allowed to have nice things too.

While you have the odd person relentlessly refreshing their houses with Kmart hacks or recklessly throwing out piles of cheap gadgets, the reality seems to be that most people who loved Kmart just loved it because it met their needs in a really neat way. It had comfy bedsheets, indestructible sunglasses and lobster bathmats, all under one set of elegant fluorescent lights.