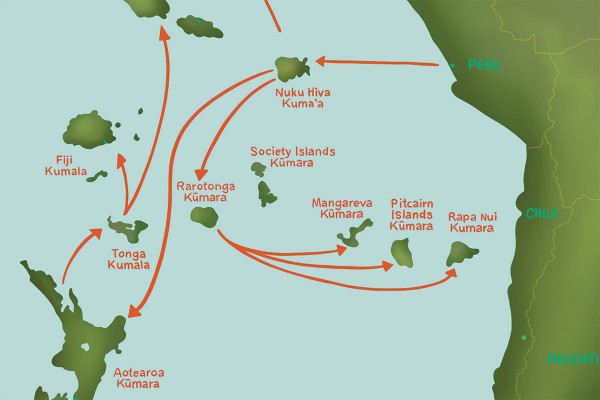 Kūmara: How One Word Crossed the Pacific

About 1,000 years ago, a Polynesian navigator made a historic trade. Goods from the Pacific were exchanged for a stubby, brownish root vegetable from the foothills of Peru. There, on a presumably sunny day on the South American coast, kūmara was introduced to Polynesia.

It’s called ‘umala in Samoa. ‘Uala in Hawaii. Kuma’a in Nuku Hiva. In te reo Māori, it’s called kūmara. The word changed as navigators spread the plant around the Pacific, mutating a little bit each time it jumped islands. And if you trace the spread of kūmara back through time across it’s Pacific pathways, you end up with one original word: ‘cumal’, the Quechuan name for a sweet potato native to South America. Kūmara itself, its journey as a word and as a crop, is proof that Polynesian navigators crossed the Pacific.

For years, people debated if Polynesian navigators ever reached the west coast of South America. If they did, it would mean that they beat Europeans to the “New World”’ by about 400 years, which would really put a stain on their self-appointed title of “greatest navigators ever”. After decades of paper-writing, story-telling, and DNA-sampling, the humble kūmara put that argument to rest.

Oral histories passed down in te reo and in the languages of many Polynesian islands include stories of kūmara, or ‘umala, or however it was called in their native language. These histories were used as evidence of pre-colonial contact between Pacific navigators and South America long before anything like DNA testing was brought into the mix.

Kūmara was an important plant to anyone who could get their hands on it. It’s rich in nutrients, it’s climate-tolerable, and it’s relatively easy to grow. In Rapa Nui, the arrival of cumal from coastal Peru may have even led to the development of moai, the island’s iconic stone heads. One scholar argued that because kūmara was so much less labour-intensive than contemporary crops, would-be farmers were now free to contribute their time to building monuments like the great effigies that now dominate the island.

As the plant spread from South America towards Aotearoa, its name changed with every landfall. And each time it changed, it became less and less like ‘cumal’ and more and more like ‘kūmara’, although the linguistic path may not be that straightforward. Because the Polynesian ‘L’ and ‘R’ are often interchangeable, ‘cumal’ is closer to ‘kūmara’ than you might think. Over about 200 years, cumal voyaged across the Pacific in the waka of Pacific sea goers. It gradually hopped from island to island until it reached the shores of Aotearoa, and it’s not the only word to do this, either.

The linguistic path traced by kūmara is traced by dozens of other words in Pasifika languages. Kūmara is the only example to provide evidence for South American contact, but even the boats that helped pick up that first kūmara tell a similar story. The very same canoes that carried the original trans-Pacific kūmara may have been called ‘waka’ if they set sail from Aotearoa, or they may be called ‘wa’a’ in Hawaii or ‘va’a’ in Samoa, because all of these languages are intimately connected. Linguistic similarities — and there are many — offer clues as to when certain groups of people split away from others, and to how long certain islands have been called home. The more similar a word, the more closely related, perhaps, are the people who use them.

Exactly who is credited with kūmara’s arrival in Aotearoa remains disputed. ​​It may have been the Tūhoe ancestor Toi-kai-rākau, sailing aboard the Horouta waka. Folklore says that he brought dried kūmara (kao) to the local Māori, who loved it so much that they decided to board the Horouta back to central Polynesia to get more of it. Another oral history tells of Marama, who sailed on the Tainui waka. She sailed to Aotearoa with kūmara, but committed a sin and was punished when her kūmara turned into pōhue. Pōhue weed remains a bane of kūmara growers throughout Aotearoa.

Also debated is whose whakapapa includes the navigators who first brought kūmara to Polynesia, and here’s where linguistics steps in. Scholars argue that Polynesian languages whose word for sweet potato is closest to the original ‘cumal’ probably were some of the first to receive it. Therefore, whichever island has the closest word probably also produced the original traders that first obtained the plant. These authors suggested that ‘kūmara’ from Aotearoa and ‘kuma’a’ in the Nuku Hiva are the closest matches. And while it’s tempting to suggest that this must mean that these islands got the first potatoes, these similarities could be superficial.

Nay-sayers argued that the sweet potato arrived in the Polynesian Triangle by accident, adrift at sea, randomly bobbing through the ocean, before finally washing up on the shores of islands near Rapa Nui. And that’s technically possible. Computer simulations proved it.

But now, DNA sampling has confirmed what Polynesian stories have been teaching for generations: Pacific seafarers intentionally brought the plant back from South America.

What’s known for sure is that kūmara cultivation in Aotearoa really kicked off about 700 years ago. It spread quickly throughout both islands, becoming a staple food for nearly everyone. Just this year, in April, Associate Professor Ian Barber of Otago’s Archaeology Programme published a paper describing kūmara storage pits dug at Pūrākaunui — 200 kilometres below what was considered Aotearoa’s southern limit for kūmara cultivation. The pits, used in the mid 1400s, represent “secure” evidence of live kūmara root storage in pre-Columbian Polynesia, and Kāti Huirapa Rūnaka ki Puketeraki manager Suzanne Ellison said that this research is “very affirming about traditions and mātauraka relating to Huriawa Peninsula”.

Exactly when kūmara boarded a Polynesian waka, and exactly who was sailing that waka, remains debated. The lexical mutation of ‘cumal’ to ‘kūmara’ gives some clues as to when it reached certain islands, and oral histories from those islands help complete the picture. But the picture is still not entirely clear. We may not know who was involved in that historic trade on the Peruvian beach, thousands of years ago, but we can all agree that kūmara is delicious and important, and also an anthropological champion of Polynesian navigation.