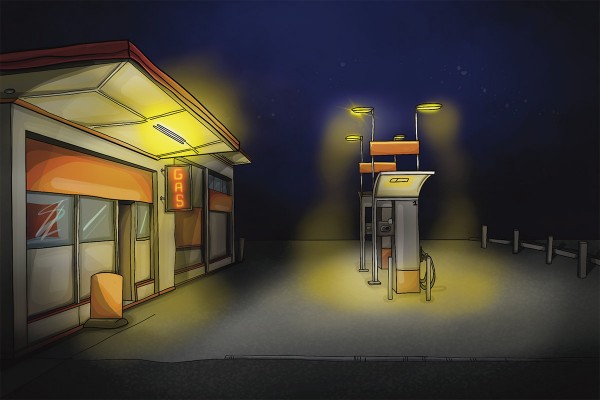 I have lived in Dunedin for long enough to be bored by Castle Street (AKA more than one year), and in that time, I’ve realized this town has some weird-ass buildings. Anyone who has set foot inside Archway Lecture theatres knows what I mean. Why are there so many entrances, but so few exits?

Anyone with a Tumblr in the early to mid 2000’s (cough, guilty), would be familiar with ‘liminal spaces’. Seen in long text posts full of empty gas stations, empty airport terminals, a slight beige fade filter, and a bus seat pattern from the ’90s.

A liminal space is a “a location, in a transition, between two other locations, or states of being.” A better definition for liminal space would be, “a place where you feel you should not be even though you are.” Here are some specific places that resonate “liminal energy” that send shivers down my spine and have me looking over my shoulder on the way out.

Is it the most cost-efficient parking place in Dunedin? Maybe. Yet, it’s somehow a total nightmare to maneuver. Getting in is so simple; a ramp, a gate, and there you are. If there is no room where you arrive, surely the next level will have some more space. The clear clean sky greets you, a moment of clarity out of the concrete box. The low ceilings, and labyrinthine layout scoops you out of town and into an abandoned Soviet car storage facility with advertisements still up from the old times.

When it’s time to leave, the exit is just a ramp away. Or two ramps. Descending down into the low-hanging levels, the way out is longer than the way in. Old halogen lights over your head eerily filter onto the concrete. As you slowly loop your way through floors of empty cars, the tight turns box you in and threaten to scrape your tires on every turn. Drift kings be warned, you may exit without your front bumper, raise those suspensions. Lights flicker over your head as it gets darker. Has the sun disappeared already? No, but you have.

You have a lecture in Archway 3. The numbers on the outside should show you where to go. It seems so simple, but the order is nonsensical. Walking into the brutal abstract building breaks you away from colourful campus life and into a vortex. The wide central hallway looping around an unknown central fixture. Walking in the front entrance, you are greeted by doors. Too many doors. Hallways diverge and the low ceilings stoop your shoulders, the air seems colder inside. The circular structure leads you in and sucks you back out, but how did you get to this door?

Leaving to find the bathroom during class is a death trap. Every turn looks the same and the toilet door is around just one too many corners. It must be easier to just keep walking around. Archway leads you back to the place you started, with no evidence that you ever left. The ’80s color palette sets the tone, a campus of days gone by when English lit was still a relevant field and walking around in circles was the most fun an academic could have without a drink in hand.

The hum of the cafe refrigerators echoes up through the empty stone walls. The sound of Castle street seeping into the grates and long, blank tables with the few late night studiers make this a dissonant scene. Walking past at night, it looks like a warm fishbowl. The revelers walk past on their way to town, oblivious to the stress and fearful studying in the lecture hall that never sleeps. Just spitting distance from the heart of studentville, St Dave’s is the final beacon of stress and exhaustion, glowing late into the night to remind you just how far behind you are.

Once the clock tower bongs nine, the building locks down and there’s no going back. The empty cafe seems to be waiting. You want to explore, the seminar rooms and storage closets hold secrets. Campus Watch make their quiet rounds, with concerned looks upon the gently building tension as the night hours creep onward. You want to step outside for a vape — a brief respite from the low buzz of lecture tech and wifi — to get some fresh air. Once you step out, the doors lock unforgivingly behind you. Now you can’t find a way back in. Everything you’ve left behind exists at the whim of the Proctor’s lackeys. The limbo holds your laptop close, you can come back tomorrow morning.

Time does not exist within these walls. Fluorescent bright lights, the screech and jingle of patrons and machines. It has the same feeling of a school disco, if all the 12 year olds smoked crack cocaine (shout out West Auckland). The building is grand, existing as some vestige of Ōtepoti greatness fueled by empty hopes and dreams. I still am not convinced it’s a real place, rather than a fun, maniacal capitalistic collective hallucination.

Walking up the spiral staircase makes you feel important, and the weight of cash in your pockets starts to feel a little heavier. It lures you in and sucks you straight up into the thick of it. The tables appear first, mostly empty but Vegas Style shit. If Poker Face by Lady Gaga played at the entrance, I would be dropping mad coin. The dopamine rush of the lights makes you feel alive, until you look around and see how depressing it really is. The mindless flipping and whirring of rigged games without cheat codes feels hopeless, and empty. Capitalism on steroids exists in the Dunedin Casino and it is, quite frankly, a mind fuck.

The Smoking Area at Carousel (on a weeknight)

Is it outside? Is it inside? Yes. On a quiet night, the empty space lures you out. The voyage past the bathrooms sucks you out into the cold air. The drink in your hand weighs a small fraction of the price, but you now get to enjoy the existential question of “is this a balcony or a ledge?” The low glow of the stand-up heaters empty into the black night and dim lighting conceals the unknown substances lining the floor. House music blasts from below your feet. Or above your head. The echoes of calling voices can’t reach you in this Octagon Oasis. You are both in town, and out of town. Carousel keeps you guessing. There was supposed to be a band tonight, right? Someone must have told you to go up those stairs, ignoring the pumping bass from the surrounding bars. The bouncer outside checks your ID, then looks into your soul. Are you worthy to be above the crowds?

If you’ve ever tried to get to Central Library from Veggie Boys, Leith Liquorland, or the Clubs and Socs building, you may have attempted to enter the ISB corridor thinking it’s an entrance into central. It’s part of the same building, it’s the most prominent entrance to that building, and in the corridor there are literally doors connecting it to the library — but only for staff! The only things this corridor is good for is buying a drink from its vending machine, staring at the surreal mix of art, advertisements, and posters lining its walls, and dissociating enough to access a transitory state somewhere deep in your brain, questioning what you’re studying and why you’re even at uni. The good news is, the Career Development Centre is right next door for when this happens.

Be it the mysterious whirring of the building, the bright piercing lights, or the inevitable neuron or two parked outside eerily — Polytech Hub at night gives off very liminal vibes. For the uninitiated, it is not immediately clear whether the Polytech Hub is open at night, and that’s likely how frequent visitors like it. The fact that it is almost — but not quite — empty adds to the phantasmagorical vibes. The lights themselves are far too bright to give off a dimly lit spooky aura, but the fact that they are so bright gives off an eerie aura of its own. They’re also on sensors, so they’ll turn off all of a sudden and students will run around frantically trying to set off the sensors and be blessed with light once more.