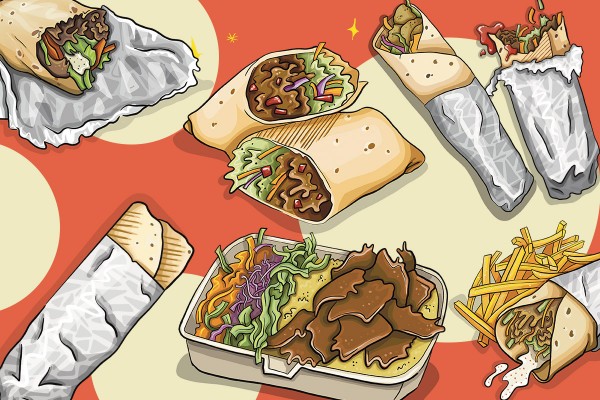 Late-night kebab missions are a hallmark of Dunedin culture. And while there are about a dozen places to order a kebab, only a handful may be open for you as you stumble home from town. Heck, not even all of these make the cut, but they were the ones our staff were most familiar with. We ordered all the kebabs at once and ate them at a round-table.

While the falafel was a bit dry, the overall experience was quite wet. This was due to their sauce standards. The sauces themselves were really tasty, but there was so much that it all spurted out and dripped as I ate, which wasn’t ideal. The wrap is a bit chewier than other places. Normally this would be a bad thing, but it actually works to soak up and insulate the sauce, as well as giving the whole kebab a nicer mouthfeel. There’s a good mixing of meat and veg in each bite. All in all, a good standard kebab. Anything worse than this is bad, anything better than this is good.

The chips followed a similar pattern. They had a decent crunch to them at the start, and weren’t burnt or dried. But the inside is a bit dense and chewy, rather than fluffy like the Squiddies’ crinkle cut ones. I’d put them above Dost’s but below Trojan’s. Also, they offer hash browns!

There were two great things about the kebab: the sauce and the walkability. The special sauce was a perfectly mysterious mixture of chilli and mayo and something else that you can’t quite put your finger on. The walkability was incredible. This was a tightly wrapped kebab and it did not disintegrate at all, not even when I got right to the saucy end of it. The meat was flavourful and juicy. I got a mixed kebab, with chicken and lamb, and there was a good mix of chicken, lamb, and salad in each bite. Overall, tangy and tasty. Cafe Nesli is pretty close to campus too, so could be a good lunch option as well as a late-night stop on the way back from town.

Location: The church one, striking distance from campus

The chips were the standout. They were perfect and plentiful, with great texture (got that crisp outside but fluffy inside) and taste. Wouldn't change a thing honestly.

The kebab was a bit lacking, but I think I got confused by the menu and ordered a wrap, whoops. Meat was grilled on a normal grill rather than sliced off a vertical rotisserie, but it tasted really great so no complaints there. The ingredients were distributed evenly and the kebab was structurally sound. But the non-meat ingredients (lettuce and cabbage) just didn't quite hit the spot.

They didn't go hard enough on the sauces either. The actual quantity was alright but they just weren't flavoursome enough. Fair enough to try not to overpower the taste of the meat, because the lamb was definitely tasty on its own, but the other components have to pull their weight too. Atmosphere was also a big win. It definitely feels holy in there.

Location: A bit out of the way, just a block up from the Baaa

Huzur Kebab is the girthiest kebab in town, which is an achievement in and of itself. Inside their chode you will find great sauce distribution and ingredient balance throughout. The lamb in particular was excellent and was clearly fresh. They’re a bit out of the way, but anyone who has been here knows that they do a damn good kebab. Everything at least met the standard, with the meats and sauces going well above. They have the best slogan: “Why have abs when you can have kebabs?” But, alas, I have since been informed that this is not a catchphrase unique to Huzur. Not ideal for a late night feed, but makes for a sober meal, pretty hard to beat.

Kebab circumference: Oops I ordered it as a salad

Location: Right on the other side of the Octy, doors from DSC

Game for a challenge, I ordered the chicken-lamb-falafel monstrosity called the Jumbo Kebab. I had casually mentioned I needed to keep the fillings separate to share for this review. Next thing I knew, the man at Dost was scooping salad ingredients into a massive takeaway box, repeatedly reassuring me that it was “better to share, better to share.” Not a real kebab, but wholesome all the same.

Serving sizes at Dost only come in one size: Fucking massive. Yes, there were a lot of veggies, but also chonking slices (not shavings!) of meat and a whopper of a falafel patty to boot. Their chips were golden and crisp, like an autumn morning in the wheat fields of Anatolia, while their hot chili sauce was sublime — inducing more tears of joy than a fresher’s first MDMA experience.

On the way out, I asked: “By the way, what does Dost actually mean?” “Best friend,” he replied with a smile. And while I had lost the chance to try a true kebab, I had gained a dost for life, and that made it truly worthwhile.

Location: A block from the Octi

Trojan embodies late-night kebab culture. Not only do they have an aux cord available for you to DJ, and club lights to boot, but two people we spoke to said that the staff have charged cell phones left behind by drunk students. Staff also remember the regulars and handle the consistently rowdy crowds better than some bar staff do. Going to town is just a pregame for the Trojan waiting room, honestly. It’s the smallest, safest, most accessible club in Dunedin.

The kebab itself, unfortunately, is suited best to this environment. Eating a sober Trojan kebab was a bit underwhelming. However, the swirling ghosts of drunken memories made it out absolutely incredible. It was a solid kebab, with great sauces, and nothing to really complain about. The chips did not fall victim to drunken mis-memory. They were as fantastic as I’d remembered. Crispy though, so if you’re a soft-chip kinda person, maybe they’re not for you. But you can’t hate on Trojan. They provide a service unlike anything else in town, and as a smaller business they’ve put themselves up against Macca’s and Night ‘n Day, which is no small contest. We don’t deserve Trojan.

Location: Alexandra, right by Wanderlust Books and the Subway

Kebab Time is the best stop on your way to Wanaka and Queenstown. This place honestly shines, maybe because the only competition is a stock-standard Dominoes and Subway. I ordered lamb and falafel. It was one of the most normally distributed kebabs that I've ever seen. The sauce was a perfect balance between getting lost in the sauce and retirement home snatch, which is a hard balance to strike.

The toastiness and sealability remains a 10/10. The kebab didn’t even collapse on the last bite. Looking past the incredible balance of sauce to meat to veg ratio, the tin foil bag stood out as the most efficient method to house a kebab. I’d rather work for noise control before getting tin foil stuck in my teeth and this solved all my problems. Disclaimer: it may give you extreme flatulence.