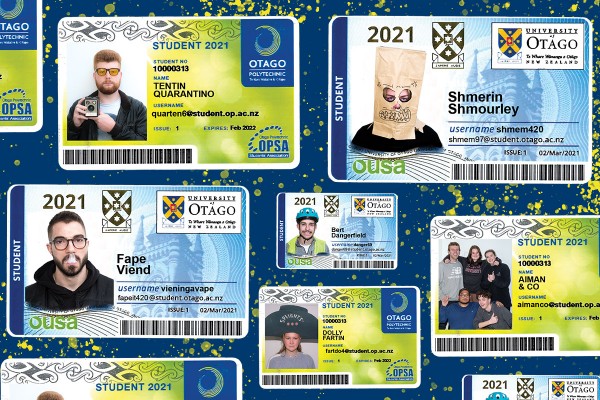 The Ultimate Guide to Looking Sexy, Gorgeous and Totally Wig in your ID Photo

Ew. Honey, you are so un-fleek right now. How do you get into Unipol looking like that? No, don’t answer. Of course you don’t go to Unipol. Your ID photo is in shambles. Don’t fret, though — we’ll turn you from “naasss queen” into “yaaasss queen!” with these trendy ID photo tips.

The ID office lighting is mega naff. You’re tired, you’re hungover, you feel like ass, and the bags under your eyes exceed Air New Zealand’s 7kg limit. Get steezy by hanging up some $9 Kmart twinkle lights to set the mood. Environment and atmosphere is everything, and nothing is smexier than unethical megacorporations! Make love to the camera. A TikTok ring light will complete your influencer chic.

This one is simple. The golden ratio, phi, is a compositional line that will make you look fire AF. To calculate it, divide your ID photo lengthways into a line of two parts, (a) and (b), so that the ratio of the larger section (a) to the smaller section (b) is equal to the ratio of the whole length (a + b) to the larger section. Therefore, a / b = (a + b) / a, which equals 1.618 — the golden number. As long as you remember that, you’ll be amazeballs chic.

You want everybody to know that you are sprightly and supple, so advertise your youthful vigour by wearing your highschool leavers’ hoodie. Make sure to wear it backwards so that CLASS OF 2020 is visible to all. This will get you a sugar papi in no time. You don’t want anybody to mistake you for a nasty, haggard, second-year-plus year old crone.

Critic Hot Tip: If you are 23 or above, your life is already over.

Invite All Your Friends

You want people to know you have friends, right? Get your besties to squeeze into the shot with you. Totally #squadgoals! Staff will have a fun time trying to figure out which one is you.

Critic Hot Tip: Pick friends who are much smarter than you. The old examination supervisor lady will get confused when checking your ID, and your mate will be able to take your scary BSNS112 exam for you when the time comes.

Bonus Critic Hot Tip: Pick friends who are smarter AND uglier than you. Hot stuff!

If it’s Bad, Ask Them to Redo It

Look, listen to me. It doesn’t matter how long the line is. This is your MOMENT, hunty. If you look totally uggo in your ID photoshoot, you are legally allowed to have it redone as many times as you need. Print out this permission slip and show it to the photographer if they argue with you.

It works on Tinder. It will work in your ID photo, too. Get a big fish and hold it for additional sex appeal. The size of the fish is directly proportionate to your dowry, so know your worth and don’t be afraid to be bold with it. Trout are mainstream and boring, unless you can get your mitts on the giant one from Gore. Try a beluga sturgeon or tiger shark instead. While you’re at it, drive your Hilux into shot as well. Just tell the photographer to get a wider lens. Don’t forget your camo, you stud, the ladies love it.

Auction Off Parts of Your ID for Sponsorship

There is nothing more in vogue than capitalism. This is your chance to get a head start on paying off that student debt you’ll be drowning in soon enough. Advertise yourself on TradeMe prior to the photoshoot and allow the highest bidder exclusive rights to your smokin’ hot image. New World cap? Speight’s onesie? “Talofa, Party Vote National” tattooed on your forehead? The sky (or at least, SkyTV) is the limit.

It’s true, isn’t it? For some reason, you just look so much cuter with the Snapchat dog filter covering up ¾ of your face. Go the extra mile and craft yourself a fursona. Now 100% of your face is vastly improved. You have the entire animal kingdom to pick from. Everybody loves a heckin’ chonky doggo though!

If you can’t afford a fursuit, any funny costume from Look Sharp will show everybody what a hilarious and relatable person you are. Dress up as Nintendo’s beloved “Super Workman Red”, or his slightly less beloved brother, “Super Workman Green”. Sporting an orange jumpsuit and staging your ID shoot as a mugshot will show everybody who the toughest guy in HSFY really is.

You want an aura of mystique and enigma. What better way than to portray yourself as a tormented Victorian woman haunted by her dearly departed husband, tragically lost at sea? A ghost in your ID photo can be achieved through a number of means. Number one: move around a little bit when the shutter releases. It will look like you are possessed by an anguished spirit. Number two: if possible, ask the photographer to take the picture with long exposure. Have a friend enter the picture long enough only to be visible as a faint apparition. Number three: Photoshop in a mysterious orb post-production. Number four: find an actual ghost. This can be accomplished through ouija board, seance, or hanging out in the Moot Court.

You can also achieve a UFO by getting a friend to throw a frisbee in the background of your photoshoot. Wig!

Diamonds are a girl’s best friend. Glue diamonds to your ID card and it will be positively blinding.

Uni is a dog eat dog world. One key to getting a head start as a fresher is looking tougher and scarier than anyone else in your ID card photo. You can get creative here. You might draw a scar, wear an eyepatch, or carry a knife. Another classic method is to simply give the creepiest stare possible. Don’t blink, and whatever you do, don't smile.

Critic Hot Tip: Another way to look intimidating is by being completely naked in your ID photo. There is nothing more frightening than a fully naked man. Nobody will know, since it’s only a headshot, but the aura will permeate nonetheless.

Saying “cheese” when the photographer takes your photo is so 2006. Instead try out one of these trendy phrases:

“There is no ethical consumption under capitalism”

“I’m too sexy for my tractor”

“According to all known laws of aviation, there is no way that a bee should be able to fly. Its wings are too small to get its fat little body off the ground. The bee, of course, flies anyway. Because bees don’t care what humans think is impossible.”

I checked the regulations, and you are actually legally required to have a mullet.

If you’re a mayo monkey with the lips to prove it, do a quick #KylieJennerLipChallenge before your glamour shoot to really plump those puckers. Grab a shot glass, pop it around your mouth, and give it a succ. Mwah!

You’re a boss ass bitch. Wield a glock in your ID photo. Nobody will mess with you.