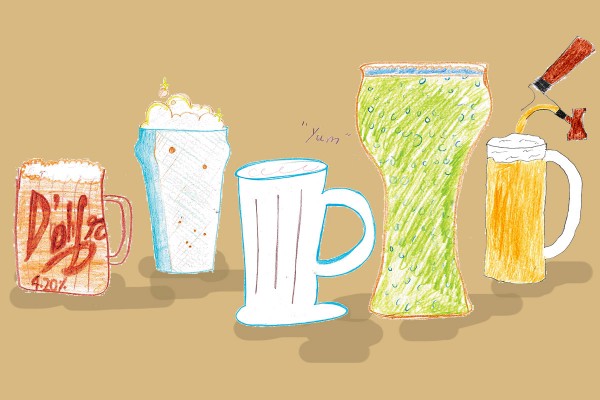 In recent years many of Dunedin’s most treasured and iconic pubs, such as Gardies and Monkey Bar have closed up shop. In wake of this, I decided to visit five popular Dunedin pubs to assess the quality of their pints.

The perfect pint is a magical and elusive artefact. Not only must the price be sensible, but the atmosphere must be just right. I purchased only the most budget options on offer. Usually Speights or the bar draught, which I’m told is just the shit that Speights didn’t want to label as Speights. That really tells you something.

There are two possible measurements of a pint: US and Imperial. A US pint is 473 mL while an imperial pint is 568 mL. In order to assess the volume of my pints, I first emptied the pint by drinking the contents, zeroed the empty glass on electronic scales, filled the pint up to the brim with water and then weighed the difference. Because the density of water at room temperature is fairly consistent I figured this was the most accurate way to establish the true volume of the pint glass. This way any difference caused by the head of the beer or alcohol content wouldn’t affect my measurements.

Bars in NZ are not required to provide pints of a certain volume. Stephen O’Brien, Manager of Trading Standards at MBIE said that: “New Zealand adopted the metric system of measurement into its legislation in the 1960s. Since this time, Imperial units of measurement (e.g. pint, gallon and foot) have not been official or legal units of measurement for trade in New Zealand.” Unfortunately, “the use of the term ‘pint’ is deemed to be a colloquial description of a large glass rather than a unit of measurement.”

Although it is not against the law to serve undersized pints it is, without a doubt, morally wrong.

Bringing electronic scales into bars is frowned upon, but generally accepted. Pint night at U Bar was the exception to this, it was almost as if they were hiding something. This required the ingenious method of bribing some random girl with a ridiculously oversized handbag to smuggle the scales in. The plan worked without a hitch and, for the price of a pint, I had exposed a massive, yet unsurprising, fraud. The ‘pints’ they serve at pint night are not even close to pints.

I realise this is unlikely to surprise many people, but the pints they were serving clocked in at a very poor 428 mL. Now I know what you’re thinking, ‘yeah but they’re only 5 dollars.’ But when you label an entire evening as “pint night” you should at least actually serve a pint. Having said that, the atmosphere was great. If the girl DJ that was on at the start of the month could email Critic that would be great, it’s really important.

At 563 mL, it’s safe to say The Bog serves proper Imperial pints. It was Karaoke night and the pub was largely populated by charming middle-aged people singing Frank Sinatra and Dolly Parton. The atmosphere was so fantastic that I stayed for two more jugs of Bog Draught, learning to party with the boomers.

With pint review and my dedication to high quality journalism as an excuse, I went for a pint at 4.30 PM on a Wednesday.  It quickly turned into several. I was with an absolute nicotine fiend who wanted to go outside so she could vape. It was fucking freezing, but the staff turned the heater on which was lovely. The music they were playing was super angsty which was somehow a great combination with the calm atmosphere. I am pretty sure the glasses they used were identical to the ones at Dunedin Social Club because the pint weighed in at 448 mL.

I don’t often frequent the Baaa these days, but I remember it fondly from my fresher years. I stumbled in on a Thursday night and was amazed at how little had changed.  The freshers singing Kendrick on Karaoke were saying the N-word with some questionable enthusiasm and some very hard Rs. I ordered a jar of Baaa draught, safe in the knowledge that the trusty Baaa wouldn’t rip me off. But rip me off they did.

A pint from the Baaa clocked in at a pathetic 425 mL. The pint glass design is intentionally deceptive, the glass is incredibly thick and it bows in the middle for maximum stinginess. I can’t stress enough what a personal betrayal this is to me. The accumulated beer that I have been cheated out of over the years haunts me. It is borderline criminal what they are doing, and there is no way to look past it.

I attended DSC on a Tuesday night. To tell the truth I was more set on the Trojan meat on chips afterwards than the pint itself, but I toughed it out. It measured in at 445 mL which was fairly small but getting close to a US pint, so I guess it was justified. Apart from a few lurking staff members, my friends and I were the only ones there, so the atmosphere was extremely relaxed. $5 is also incredibly cheap for a pint of Speights too. I was pleasantly surprised, but still slightly underwhelmed.

After I concluded my scientific study, the only actual pint that I reviewed was at the Bog. They win by default. Everyone else is disqualified for undersized pints. They couldn’t even make it to a US pint, which is pathetic. The Baa also gets a special call out for betraying me in ways which I will never recover from.