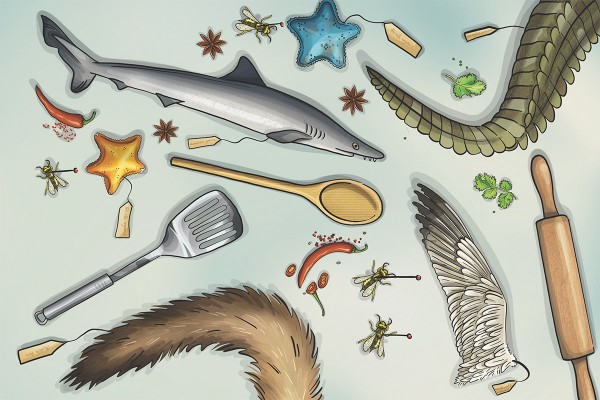 For most children, a trip to the aquarium was a source of wide-eyed wonder. Great shoals of fish swarming left and right, majestic ocean creatures dancing a delicate underwater ballet despite being the size of a large car, the brightness and vibrancy of swaying sea plants.

I was not one of those children.

In our family, visits to the aquarium quickly became a supermarket shop with a never-ending seafood section, with our eyes keenly peeled for fish which would steam well, which were just the right size for deep-frying whole, and which one looked a bit too much effort. Bottom-feeders are generally a no-go zone. I vividly remember my grandma at a marine conservation aquarium in Malaysia, licking her lips at a tank of, admittedly quite large and tender-looking, sea turtles.

There is an old joke that Cantonese (Southern Chinese) people will eat anything with four legs that isn’t a table, anything which flies that isn’t a plane, and anything which swims that isn’t a submarine. You could put this down to a largely secular culture with fewer dietary restrictions historically, or simply lazy stereotyping. After all, the industrial farming trifecta of beef, pork and chicken is a very recent invention, and Pākehā themselves have never been averse to such delicacies as deer, rabbit and whatever the fuck goes into luncheon ham.

Anyway, lazy stereotype or not, I would never turn down a chance at a tasty shnack, and my culinary senses were appropriately piqued on a recent trip to Otago Museum’s Nature Galleries. So for any other adventurous eaters out there, here’s my guide to the tastiest creatures you can find out there (avoiding the ones which would objectively be finger-licking good, like the rock lobsters).

Yes, it looks as delectable as any other fish out there, with its tender, muscular flesh, but to be honest it’s pretty much interchangeable with any other fish, although watching Seaspiracy may steer you towards a nice chunk of firm tofu instead. As for the fins, they’re not just horrific from an animal welfare point of view, they’re also eye-wateringly expensive and, most insultingly of all, they don’t actually taste that good. You can replace it with vermicelli noodles and gelatin, for fuck’s sake.

Cooking style: Fish are friends, not food, I guess. I’ll let them off, but only just this once (sorry, grandma).

Ha ha, very funny, I’ve never heard that one before. Seriously, though, if we had a lot less of an aversion to eating wee little Mittenses and Garfields, we could probably go a long way towards restoring the dawn chorus. It’s just part of nature’s healing process.

Cooking style: Cute, chubby, domesticated cat? Probably roast it. Bonus points if you can get crackling out of the skin. The type that roams around at night, slaughtering all native birds within a 20km radius? Slow-cook that tabby with something stronger-flavoured (something like a curry or a dark soya sauce gravy).

Definitely wouldn’t picture it as the most appetising, although they are probably slow enough to yoink one if you’re getting desperate for any sort of animal protein. It does look like a soft boi underneath that tough reptilian exterior. Bonus is that you can use those scales to your advantage, it’s pretty much a ready-made covering for all that nice, tender flesh.

Cooking style: Grill it over a hot charcoal fire. I reckon its flesh would work perfectly with a spicy chili and lime marinade. Wrap it in foil or banana leaves for an earthy, smoky oomph, give it about 10–15 minutes on each side, and crack that baby open. Perfection.

I’m thinking similar vibes to the tuatara, except many times larger. A tuatara would probably be a decent meal for one — this is a flat dinner which would then supply lunches for days to come. They’re pretty active and muscly, which means the meat would probably be a bit tougher. That’s no barrier though. It just means you need to get a bit more creative culinarily.

Cooking style: I’m thinking something that could use its texture and gamey taste to its advantage — jerky, perhaps, or something with a bit more kick to it, like biltong. It’ll keep for ages, too, which is handy when you’ve got 300kg of meat to share amongst the flat.

In theory, moa would make a slap-up meal. After all, you can’t really go wrong with an enormous chubby herbivore bird. The issue is more a matter of practicality. Kind of like the alligator, it’s just too big to deal with. Like a Christmas turkey (but multiplied by many times), it’s fun on day one, but on day 27 when you’re making spag bol à la moa for dinner, you’ll be wishing it’d just disappear.

Cooking style: An open fire would probably be the only way to go with these things. Low and slow, baby, low and slow.

Same issues as the moa, in that it’s just too bloody huge. It inches ahead, though, for two big reasons. First of all, with all that seal fat, you won’t need to buy cooking oil for days and every meal will be infused with the taste of the ocean. And second of all, sashimi.

Cooking style: Best enjoyed fresh, after a hard day of clubbing. Slice it up thin, serve it with soya sauce and wasabi, and a cup of warm sake on the side.

Hear me out here. These swarmy little fuckers may seem threatening and mildly poisonous, but since when has anyone let that get in the way of a good meal? After all, we thought carrots and tomatoes were poisonous too, and we showed the bastards what we could do to them.

Cooking style: There are more ways to cook a wasp than there are to skin a cat. Traditionalists will swear by deep-frying, but you could roast, or even air-fry them (maybe with a drizzle of honey, or tamari soya sauce). The endgame you’re wanting is crispy, moreish snack you’ll cronch on by the handful whether watching a movie with your mates, as a perfect finger food at parties, or just during your study session in the middle of Central’s Quiet Zone in the middle of exam season (honestly, we don’t mind).

My first instinct was to reach out and try to squeeze these adorable, chonky little cartoon characters-made-flesh. They looked like starfish force-fed to bursting point. Not in a horrifying foie gras way, but in an adorable way, kind of like a rosy-cheeked Dudley Dursley in knickerbockers. My second instinct was to imagine how much delicious gravy these spongy creatures could soak up in their chubby wee bodies.

Cooking style: Add generously into a stew as it simmers. Maybe 30–45 minutes if specimens are dried, or 15–20 minutes if fresh. Just long enough for to soak up those wonderfully rich and complex flavours, but not so long that it just gets all soft and mushy. Anything with a soupy, thick gravy will be perfect, providing a nice, springy and mild contrast to the other ingredients.

I mean, look at them! These cute and cuddly little chubsters couldn’t be more of a tasty treat if they were packaged up with a cute little bow and a sticky note with ‘eat me’ written on it. As a bonus, God/relentless evolutionary pressure over millennia designed them almost perfectly-sized to be a snack for one.

Cooking style: These are just begging to be roasted on a skewer, maybe while wrapped in streaky bacon. Enjoy with beer and plenty of friends (optional extra).

Big and majestic enough to show off as a special occasion centrepiece, but still small enough to cook reasonably well at home. Versatile enough to work with pretty much anything, but with a flavour you can guarantee will set it apart from your average chicken. Think of all that seafood and ocean air. It’ll work well whether you’re treating yo’self, making a slap-up flat dinner or trying to bribe important (non-vegetarian) adults.

Cooking style: This isn’t a meal, it’s an event— like a traditional three course Peking duck.  Marinate with five-spice powder and roast, then split it. Use the extra crispy skin as a starter, the meat itself as a main course, and the bones to make a flavoursome soup on the side.