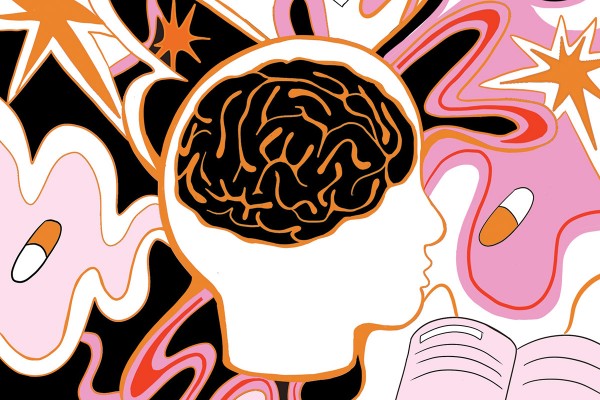 The Lost Generation of ADHD: The women and non-binary people who missed being diagnosed as children

Esmerelda* was 36 when she was diagnosed with Attention Deficit Hyperactivity Disorder. She isn’t the zoomy young boy most people associate with ADHD, a stereotype that leads to countless young girls and non-binary children going undiagnosed. These children grow up battling with their own brains. Often they struggle to get a diagnosis, even in adulthood.

There are three genres of ADHD: Hyperactive-impulsive, inattentive, and a mix of the two. Hyperactive-impulsive is most prevalent in boys, and far more visible than the inattentive, daydreamy kid doodling in a corner. This is one reason why boys are diagnosed with ADHD at three times the rate of girls, even though the rate of ADHD is likely the same between men and women. ADHD kids are more likely to be gender diverse too, but gender diversity is severely unrepresented in studies.

Esmerelda felt like she’d been fighting her own brain for her whole life, but assumed it was like that for everybody. It’s currently her third dig at university. Managing workloads had always been difficult, and she switched degrees a few times due to fluctuating interests. It was an article about female-presenting ADHD that enlightened her. Everything that she’d assumed was “normal” was right there.

She went to Student Health for a referral in undergrad, but didn’t have the $750 to be assessed. She did her Honours degree unmedicated. Working on a dissertation alongside coursework 16 hours a day took its toll. She relied on binge-eating and alcohol, keeping a whiskey bottle in her cubicle to let off steam. She described it as the “most exhausting, anxious, stressful few years.”

“I had to attend lectures, record them, transcribe them out by hand afterwards and collate it with lecture notes from Blackboard. I had to triple-handle everything because I simply could not stay attentive in lectures,” she said. “I got high grades because I was driven by shame and anxiety. When it came time to write my dissertation, I pumped out 35,000 words within three weeks. No matter how much I plan out assignments, everything is always a last-minute hectic out-of-body experience. I have the intelligence to gain A+s, yet I have had to put in quadruple the effort of other students. It was borderline debilitating.”

In PhD, Esmerelda was crushed to find herself drowning. The structured Honours course that forced her into action with deadlines and grade anxiety was gone. She was unable to self-manage. “I had worked so hard to get here. It broke my heart that I was unable to make the most of the opportunity, which included a scholarship. I felt like a fraud and like I was too stupid to do PhD,” she said. Without her diagnosis, which she pursued privately with scholarship money, she would have quit.

Medication has changed Esmerelda’s life. She can now organise her workload into manageable tasks, make meals, and deal with laundry, things that most people take for granted. “I used to admonish myself constantly and view all of my struggles as my own fault, calling myself lazy and stupid and worthless,” she said. “I’m starting to give myself credit for the sheer efforts that I have made in life.”

“Now I understand that those struggles that I have lived with my entire life were not my fault. If anything, the fact that I have managed to make it this far academically is a testament to myself. Imagine getting to PhD with a behavioural disorder that prevents you from being able to focus on lectures or manage a workload sensibly.”

The people Critic spoke to all experienced an often-ignored symptom of ADHD called Rejection Sensitivity Dysphoria (RSD). Whereas criticism will fly over a neurotypical person’s head, someone with RSD might experience extreme emotional pain. “I hate to be like a 14 year old on TikTok who just found out what that word is,” said Ceri, “but rejection sensitivity was something that I didn’t realise was a thing. I thought it was just me as a person.”

Because of RSD, many ADHD-ers get misdiagnosed with borderline personality disorder, anxiety, or depression. When these conditions co-exist, as they commonly do, the definition between them gets even murkier, especially in people who’ve gone undiagnosed for so long.

It took Ceri five years to be diagnosed. Twice she was referred to Student Health, and twice she was dismissed. When she was finally taken seriously, Ceri lacked the funds. “There’s a self-fulfilling prophecy where I thought I was faking it, because I have low self-esteem due to rejection sensitivity, so I don’t advocate for myself. Because I don’t look like what people expect [ADHD] to look like, nobody else advocates for me either. So nothing happens.”

Undertaking Masters unmedicated “sucked ass,” she said. Ceri’s inability to prioritise work was paralyzing, so she’d binge eat and “have a nap about it” until the deadline, where she would complete her work fuelled solely by her fear of disappointing people. Eventually, Ceri went private and was medicated immediately.

Ceri is a teacher now, and can see how it happens with kids. She notes that the students who take ADHD medicine at lunch are almost exclusively boys. “There’s always one type of kid where you look and think, that’s the ADHD one,” she said. “Then I notice kids with similar symptoms to me at their age being excused as their personality. Personality is used as a justification until it gets to a point that we find uncomfortable. When kids are not disruptive, we think it’s not a problem, so that kid is fine. That kid is not fine.”

Charlie nearly dropped out before getting diagnosed in first year. School was always a struggle, but university’s self-directed study was a huge learning curve. “My grades were shit [...] I got very good at chewing out an assignment the night before. Time doesn’t really exist when you have ADHD, and deadlines are only real when they’re directly in front of you.”

Charlie recalled doing an online ADHD assessment in high school “for a laugh”, only to pass with flying colours. It was the first time they realised they might not just be lazy and stupid. At Uni, they went to Disability Services, who paid for a screening and provided accommodations such as note-taking.

“The only reason I even got my foot in the door was because my brother was already diagnosed. People with ADHD are already not taken seriously, and people not believing what you’re going through makes it really hard to get a diagnosis.”

Although doing Masters with ADHD is still difficult, Charlie described their diagnosis as “life changing”. They’d spent much of their life wondering why education seemed so easy for everyone else. Now they had an answer, and with support, their grades improved almost overnight. “It gave me room to forgive myself for a lot of what I’d spent pretty much my whole life beating myself up over.”

However, they’d rather the process “not cost seven hundred dollars. I was really lucky that the University was able to pay for mine, but most people don’t get that. It’s a huge hurdle especially for poor students.” Charlie mentions that Concerta’s side effects “nearly killed me, straight up”.

“I’m on Ritalin now which is much better, but [Student Health] wouldn’t give it to me until this year because they were worried about the “street saleability”, which is such a horseshit excuse as well as being extremely offensive.”

Cat became aware of her potential ADHD after resonating with online accounts. She related to their lived experiences of hyperfixation, disorganisation, lack of focus, and rejection sensitivity. Previously, she’d shared common misconceptions about it being exclusive to “hyperactive little boys”.

“Only when those were broken down did I start to recognise that I'm exhibiting some symptoms as well, and maybe it’s worth checking out,” she says. “If there had been a greater awareness of how ADHD manifests in women, somebody could have started on that process a lot earlier than I did.” Along with access to medical support, a diagnosis can be hugely validating. And if Cat doesn’t get diagnosed with ADHD, she says, at least she knows that the problem lies elsewhere.

These people all have dummy thicc brains, which unfortunately makes diagnosis harder. Cat recalls opening up to a friend who promptly shut her down. You can’t have ADHD because you’re doing Masters, he rebutted. In reality, Cat explains, such statements “dismiss how difficult it is to manage ADHD on top of the difficulties of study. Degrees are hard, but they're much harder when you're impacted by fucky brain shit.” Ceri experienced similar sentiments from doctors. “Everyone’s like, you can’t have ADHD because you have a Masters degree. Actually, I’m just cripplingly afraid of disappointing anyone ever, so that’s the reason I get my work done.”

After living with undiagnosed ADHD for so long, imposter syndrome runs rife. In the weeks following her diagnosis, Esmerelda was convinced she had “hoodwinked” the psychiatrist, while Ceri admits to feeling “like a bit of a fraud”. “Maybe it’s because I was diagnosed after being on the planet for a fucking quarter of a century, but I have a hard time extracting it from who I am,” she laments. “Then I’m like, that’s not ADHD, I’m just a shit person.” Esmerelda’s psychiatrist says that this is particularly common in women following diagnosis later in life.

My own ADHD went misdiagnosed until Masters. Like many others, it had already taken a toll in the form of depression, anxiety, substance abuse and an eating disorder. It’s a long time to think you’re irreparably broken. All interviewees reported this isolation and alienation, feeling “fucking insane and stupid” for the way their brains worked, but not knowing why. Relationships fell apart. Some were admitted to psych wards. They felt lost.

Getting diagnosed through Student Health is taxing as fuck, thanks to y’all neurotypical bitches who misuse our Ritalin. You wait for a screening questionnaire. You wait another eight weeks for a review. Then it can be more than a year for a $750 assessment. The alternative is finding a private psychologist for ~$1000, should they have availability. This doubly sucks when ADHD’s symptoms include impatience and disorganisation.

Esmerelda would like to see acknowledgement of ADHD as the debilitating struggle that it is, rather than a euphemism for “hyperactive” or “lazy.” “People say “oh I’m like that too”, because they sometimes can’t be fucked studying, but it doesn’t seriously affect their life. That’s an example of how ADHD gets downplayed and invalidated. I’d like to see more research on how it presents in girls and women, because throughout my diagnostic process, older criteria were used, which definitely lean heavily towards the “hyperactive little boy running around climbing the walls” brand of ADHD.”

“It is more than worth your money to seek diagnosis, if you really feel that you are experiencing symptoms of ADHD in a way that significantly cockblocks your life. I wish I had saved up the money and sought diagnosis so much earlier,” she said. “It slays me to think about how much of my life has been unnecessarily wasted just struggling, but I’m only looking forwards, not backwards. For my own sanity.”