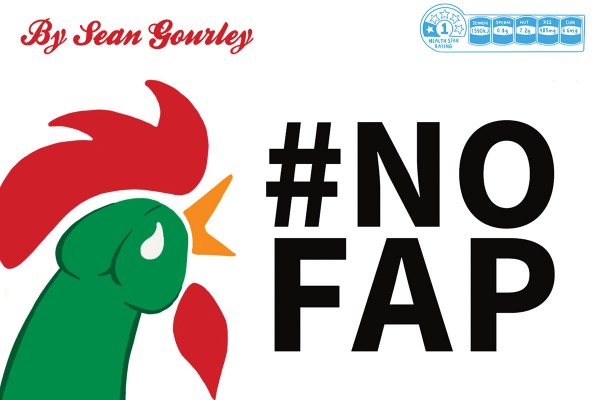 #NoFap: Why some guys refuse to do the five finger shuffle

The internet has allowed these groups of no-fappers to congregate. New Zealand no-fapper Matthew Kendall, who posts #NoFap videos to his YouTube account, discovered NoFap through YouTuber “BecomingAlpha”. Kendall was in high school when he discovered the videos. “I saw a video about NoFap and just clicked on it. I found this one guy [BecomingAlpha] he was all about NoFap and I watched all of his videos. I was like ‘this is so sick.’”

NoFap is linked to pick up artist thinking, in which women are objects that cannot resist “alpha” men who overcome weaknesses like the urge to mangle their midgets. A popular post on the page states that “Porn is a tool to weaken men.” Users tout it as a way to achieve an imaginary level of manhood at which all problems disappear and you will be entitled to sex from women. Many of them become obsessed with the idea that they are struggling because they are not an alpha male. Rather than asking for help they blame themselves for not being strong or “alpha” enough.

Matthew Kendall’s NoFap videos are in two categories. The first are long monologues about the benefits of NoFap, which describe a range of techniques someone can use to avoid the dreaded “relapse”. The second are “infield examples”, videos where Kendall approaches random girls around the UC Campus (or sometimes shopping centres in Christchurch) to demonstrate the charm and confidence that NoFap produces. These are uncomfortable exchanges. In one video, Kendall approaches two women and makes conversation in a mall. He talks for several minutes, on camera, to a third women while the other two women look at each other in horror. In another video, he meets a group of geared girls in town. They quickly realise being on YouTube is not as great as it sounds.

Kendall viewed NoFap as a pathway to better performance at sport. “I noticed when I was playing cricket that when I felt good I played well and when I felt bad I played bad. So I started looking into stuff that could help me feel better — stuff like diet, exercising more —  even cold showers. I kind of experimented with NoFap and how I felt and I noticed that I always performed better when I was on NoFap,” he said.

Many pseudoscientific theories, like astrology and acupuncture, have their roots in medieval scientific reasoning which has been translated into the modern day. Beliefs about NoFap are no different. Most medieval thought, and especially that of the Catholic Church, was strongly against jerkin’ the gherkin in any form. The origins of this stance go all the way back to the biblical sin of Onan, who disobeyed God when he “spilled his seed on the ground” after he pulled out of his sister-in-law. Despite the lack of clarity over whether this one line in the Bible can actually be taken to extend to masturbation, the Catholic Church has used this for centuries as evidence that God hates it when you tickle the pickle.

But Kendall and many like him do not abide by any religious reasoning. For him, NoFap is only part of a broader lifestyle change aimed at making him a better and more confident person. “Bro, I just do everything, I want to feel like an absolute beast 24/7. Like recently I’ve been waking up at like 6am, straight in the cold shower, I’m doing breath work in the cold shower so I can stay in there for a solid three minutes, freezing cold. I haven’t had a hot shower in months. Then straight to the gym after a quick ten minute meditation. Two cold showers a day, by the way, 8pm is my second cold shower.”

This wellness-based philosophy is also not new. The renaissance saw increasingly complex reasoning to justify the negative effects of cleaning your rifle. In his 18th century writing on the subject, Swiss physician Tissot wrote: “the loss of one ounce of [semen] would weaken more than that of forty ounces of blood.” He believed that the destination of the semen played an important part in determining whether ‘evacuations’ would have a good or bad effect on one’s health.

Even having sex with your girlfriend can interfere with NoFap. While getting girls is one of the supposed key benefits to NoFap, the other benefits will apparently diminish if having too much regular sex. “Maybe with a girlfriend you put the NoFap on the back-burners for a bit. I was seeing this girl maybe two weeks ago, and she just wanted to have sex like every day, and after the fourth day I was like ‘okay, goodbye.’ I can’t be doing that,” he said.