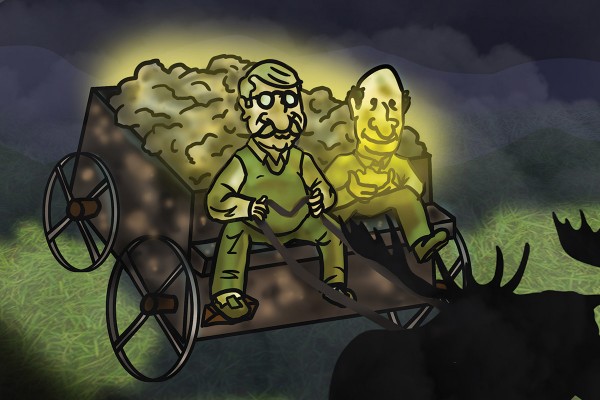 Nuclear Expeditions and Communist Plots: Inside the Secret Government Hunt for Uranium in Fiordland

There was a secret government expedition to Fiordland in 1944 to search for uranium for nuclear weaponry. I went down a rabbit-hole of archives, obituaries, and letters that took me from Fiordland, to Nigeria, to Norway — to find answers to the questions I had.

I was reading an article from half a century ago when I came across the shocking story of a secret expedition for uranium. The piece was from a 1971 issue of Salient (Vic’s student magazine) and was about US military involvement in New Zealand. The paragraph is short and near the end of the article:

“According to Otago University geologist Dr. C.O. Hutton, when the Manhattan project for the development of the atomic bomb was undertaken during the war, an appeal was made to all allied countries to search for supplies or radioactive minerals. The NZ Government sent a secret expedition under the leadership of Dr. Hutton to Fiordland in the hope that important discoveries would be made there ... The expedition failed to find any uranium.”

I had so many questions. Who was Dr Hutton? Did the NZ government really send a secret expedition to Fiordland to find uranium for the Manhattan Project? What would have happened if they had found uranium?

A web search produced some promising results, biographies of New Zealand scientists who worked for the Manhattan Project, and records of the Atomic Energy Act. But the knowledge that kiwi scientists were intimately involved with the development of atomic weapons during WWII doesn’t answer any of our questions. Further digging leads to an obituary of Dr Colin Osborne Hutton, courtesy of the Geological Society of America.

Hutton was a bit of a nerd. By the age of eight, in 1918, he built a two-way crystal radio capable of reaching radio stations in the US. At the age of 24 he was an acting lecturer of geology at Otago Uni. He then became the chief mineralogist of the New Zealand Geological Survey.

It seems he was also quite the genius geologist, but more importantly, during his time as chief mineralogist “from 1942 to 1946, he was officer-in-charge of radioactive mineral research. He was also officer-in-charge of the scientific personnel aboard the New Golden Hind [a ship] on cruises of geologic exploration.” The obituary made it clear he had no relatives alive today I could contact, but it confirmed that our friend Hutton had worked in radioactive research and been involved in geological expeditions. So far, so good.

Tracking the New Golden Hind takes us to Te Ara, the government encyclopaedia of NZ. An entry titled ‘Prospecting for uranium’ tells us how in March 1945, the New Golden Hind was taken to Fiordland by the DSIR (an old government science agency) for a “secret uranium survey”. This must have been the expedition Hutton led.

The entry goes on to conclude that the expedition found no uranium. Five months later the United States dropped two atomic bombs on Hiroshima and Nagasaki, signalling an end to the war. Despite the war being over, a second expedition was carried out on the New Golden Hind in 1946, which also failed to find significant quantities of uranium. This second expedition was not secret, and there are botanical, paleontological, and historical records of the voyage. It appears that this second expedition was led by a geologist named Dick Willett, and Hutton was not involved. I was not satisfied. We still don’t know what they found in that mysterious first expedition, or if the uranium they searched for was explicitly for the Manhattan Project, or what they would have done if they’d found any, or what Dr Hutton thought of it all. It was time to search the archives.

In searching the historical archives at the Hocken Collections for any trace of Colin Osborne Hutton or the secret expedition to Fiordland, I found a single item. A 1948 letter from Dr. Hutton, a year after he’d moved to Stanford University, to John Harris, an old colleague at Otago Uni.

While waiting to view that letter, I returned to the article that started this wild uranium chase in the first place. Published 50 years ago, there was a chance the author of the Salient piece was still alive and I could contact him for help. But alas, this was not the case. A quick Google search of his name revealed Owen Wilkes was far too important and far too dead to be replying to any emails. But he did become an important name in this web of uranium-exploring-dead-men.

As I found out, Owen Wilkes was a big bearded guy who often wore leather shorts and bare feet. According to an old friend of his, Owen Wilkes “looked like an Old Testament prophet”. He was a peace researcher and anti-war activist. He researched US bases in New Zealand in the ’60s and ’70s and founded the Anti-Bases Campaign and the Campaign Against Foreign Control of Aotearoa. In the ’80s he worked in Scandinavia for six years, where he published a report on listening posts in Northern Norway that was sourced from open information, but led to him and his co-author being arrested, tried, and given a suspended prison sentence for espionage. He died in 2005, preventing me from ever asking him about what Dr Hutton apparently told him.

The following day, I was given permission to read the single Hocken Collections letter from Dr Hutton to John Harris. Sadly, it doesn’t blow this case wide open with revelations about a secret uranium conspiracy. Nonetheless, it provided some fascinating insight into the perspectives of both Dr Hutton and John Harris. John Harris was the University of Otago Librarian at the time, and a thoroughly cool dude.

Harris spent the first few decades of his life studying at Oxford University and travelling through the Mediterranean and Canada, spending years as a homeless lumberjack, before moving to Auckland. In the ’30s he became involved in the left-wing and anti-war political scenes, where he met Rita, his future wife. Harris represented the Auckland Civil Liberties League on the Auckland Anti-War Council and was a self-described journalist as well. In 1934, he married Rita and applied for a Carnegie fellowship with Otago University to spend nine months in London studying librarianship. Both the police commissioner and the US Embassy opposed his appointment to the fellowship, arguing he was a “communist agitator” and an “alien anarchist” who was plotting to, I don’t know, become the Lenin of Libraries? Despite the pushback, Otago Uni approved his appointment and when he returned in 1935 he became the University of Otago librarian and transformed our library system, remaining in the role until 1948, when the letter from Dr Hutton was sent to him.

The following year, John Harris moved to Nigeria to found a library at the University of Ibadan, then continued through West Africa for another two decades, setting up libraries, sitting on university councils, and teaching as a professor of library studies. The John Harris Library remains the central building of the University of Benin to this day. He was described by numerous sources as the ‘Father of West African Librarianship’.

The letter itself shows that John Harris and Colin Osborne Hutton were friends, exchanging the usual pleasantries in the tone you’d expect from a 1948 letter between two distinguished gentlemen. The letter shows what it was like for Dr Hutton, a year into his move to the USA. He is critical of the ongoing red scare, writing that “the political scene here is not pleasant,” explaining how anything you didn’t like could simply be denounced as ‘communist’ and shunned, and that “the newspapers are so distorting news that it is a most difficult task to find out just what is going on.” Hutton recounts how he overheard a colleague say that “the sooner we dropped a few atomic bombs on the Kremlin the sooner we would fix this mess up,” sarcastically adding “there was a chorus of approval to this gesture of international goodwill.”

The letter shows the two men were intensely critical of overly-patriotic wartime propaganda, and we already know that Harris at least was actively involved in human rights groups, communist groups, and anti-war groups. If Hutton was friends with John Harris, it seems very possible that he would have talked to, or even have been friends with, Owen Wilkes. It also seems likely that Dr Hutton would not have approved of his scientific expertise and efforts being used for atomic weaponry, even if he had led the secret uranium expedition.

I was almost ready to wrap this adventure up, but then I noticed, in the top left corner of the type-written letter, a hand-written note. The note was subtle, but clearly said “How did Operation Jamaica turn out?”

Operation Jamaica? What was Operation Jamaica? Why was Hutton asking Harris how it went? A cursory internet search found nothing on any ‘Operation Jamaica’ other than a dreadful looking 1965 internationally co-produced Eurospy film of the same name. Further investigation hit dead-end after dead-end. As far as I can tell, John Harris never visited Jamaica or worked with anyone from Jamaica. Maybe Harris planned to open libraries in Jamaica and promote literacy in the Caribbean before he changed his mind and went to West Africa instead. Maybe he and his wife simply wanted to go to Jamaica for a holiday, and Operation Jamaica was their playful nickname for their plans which never ended up happening. Maybe Harris’ anti-war political activities and Hutton’s radioactive expertise led to their involvement in a secret nuclear revolutionary plot dubbed Operation Jamaica. Or perhaps Harris was a stoner, who was struggling to find weed in Dunedin, and Operation Jamaica was his mission to find that sweet, sweet, ganja. We may never know.

Neither the secret expedition to Fiordland, which was likely led by Colin Osborne Hutton, nor any subsequent searches for uranium within Aotearoa, have found sizable amounts of uranium within Aotearoa, and our nation has been staunchly nuclear-free for decades —  partly due to the activism of people like Owen Wilkes. We can only speculate what would have happened if Fiordland did in fact hold masses of uranium. It is entirely possible that if this was the case, the financial and military interest would have significantly changed the way the anti-war and anti-nuclear debates played out in the ’60s and ’70s. For what it’s worth, I believe Dr Hutton would have joined many of the New Zealand scientists who worked on the Manhattan Project in denouncing the use of scientific progress for global violence and destruction.