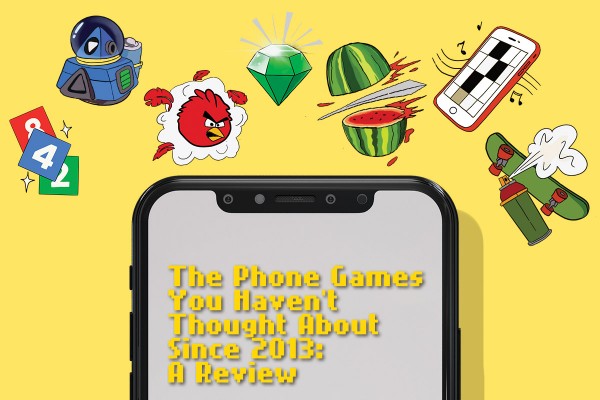 The Phone Games You Haven’t Thought About Since 2013: A Review

The year was 2012. The Prime Minister was everyone’s favourite blokey Uncle John (just your average BBQing, beer-drinking multi-millionaire investment banker with a Hawaiian holiday home). “Going into debt” meant a $5 loan from my parents for Maccas in town. Lunchtimes seemed to last hours on the school field, and afternoons stretched on forever in a blur of TV2 cartoons interspersed with Erin Simpson before she was cancelled.

Those days are long gone. I can’t reverse puberty, bring back the old What Now, resurrect Club Penguin, or return the second-term Cabinet of the Fifth National Government to power. However, one way I can still access those long-repressed adolescent days is through the power of classic phone games, the relics of a more innocent time when I could hang out at schools without getting a restraining order slapped on me.

So dust off your iPod Touch, open a pack of dollar mix from the dairy and join me on a journey through the deepest, darkest and most nostalgic moments of the 2010s.

On the App Store, Angry Birds was nowhere to be seen. It appears to have been replaced by a mysterious sequel, Angry Birds 2. This disrespect immediately cost them points. After all, this unholy avian-porcine union probably taught more students classical mechanics than the rest of Aotearoa’s physics teachers combined.

In hindsight, the first red flag was the App Store review from “xXVIBINGGOODXx,” who said “im crying whenever i play cause rovio why you remove my childhood games! Ive been playing this game since i’m 3 in 2013”. One felt Rovio should probably focus more less on bringing back their childhood games and more on paying for some family therapy.

Despite xXVIBINGGOODXx’s solemn protestations, Angry Birds 2 ultimately hasn’t changed much from the original, other than slightly slicker graphics. Slightly disturbingly, there is a close-up camera showing the fury of the little kamikaze birds (also, they have teeth?!?), as well as trembling, shaking porcine families. Like some twisted kiss-cam, this ensures you see every detail up to their violent deaths.

Ultimately, I couldn’t stick with it for too long. It was partly the trauma of war, but mostly it was just the repetitiveness of the levels. A boss level featuring “Chef Pig” promised “a tough opponent” but still took all of ten seconds. Unless your dedication to popping pigs extends to the virtual world, I wouldn’t recommend.

Verdict: 14 years jail for distributing content which “promotes or encourages criminal acts or acts of terrorism,” under the Films, Videos and Publications Classification Act 1993

After the slickness of Angry Birds 2, it was refreshing to see Temple Run hasn’t changed a bit since the heady days of 2011, when my sisters and I would duke it out for the privilege of playing this on the family iPad. The graphics are still refreshingly rough around the edges, and the “oorgh” noise the runner makes hitting the ground is unconvincingly hilarious. Gameplay-wise, it still strikes the right balance of being easy to pick-up, but challenging enough to keep you playing. It’s a pity some aspects of the game haven’t quite moved on, though.

To recap, this game centres around Guy Dangerous, “just your average explorer” pilfering an idol from a temple in the South American jungle. And that isn’t even the most problematic character in the game. Other hackeneyed clichés you can unlock include Barry Bones, an African-American “city cop with an attitude” and Karma Lee, a kimono-clad generically-Asian lady with “the fastest legs in the Far East”. I know 2011 was a different time, but come on.

Verdict: Mandatory seizure of the idol by the New Zealand Customs Service without compensation, and return to the country from which it was stolen, as restitution, under Section 10 of the Protected Objects Act 1975

How the fuck did I never realise this is pretty much the exact same game as Temple Run? Except you’re a teenage tagger running from a cop and a vicious-looking dog, which I guess is cooler. Also, helping this young rebel avoid police brutality is a hell of a lot more compelling than helping Guy Dangerous escape with his looted idol so he can sell it to the British Museum.

This awakened the hyperactive little kid in me. Jetpacks (powered by fucking MACHINE GUNS)? Check. Sticking it to the man? Check. Gratuitous cartoon violence? Check. Heart-warming backstory that doesn’t quite stand up to scrutiny but provides a sufficiently flimsy excuse for said violence? Check.

It’s a bloody great time and easy to get the hang of. Unlike lots of other endless-running/scrolling games, there are lots of little nuances which keep it from getting too repetitive. Like the little panicking scientists in hazmat suits, who you can high-five, before killing them with the spray from your jetpack. Or some of the crazily-overpowered vehicles you can unlock, like the “Lil Stomper,” “Profit Bird,” or “Strong-Arm Machine”. Even the item descriptions are hilarious and worth downloading the app just to read. Overall, good, ridiculous fun.

Verdict: A $10,000 fine for discharging a firearm in a public place under the Arms Act 1983, but overturned by the judge because “wanting to use a machine-gun jetpack” is a reasonable excuse (or reasonably badass, at least).

With a lot of these games, there is an element of restrictiveness, in that there’s really only one way to get the job done. The beauty of Fruit Ninja, though, is that this all goes out the window, and you can pretty much play it however the hell you want.

Wanting to burn your productive energy and motivation that you were going to use on that weekend assignment to beat your high-score instead? Focus hard, and get those multi-fruit combos. Taking it slow and easy after a rough afternoon lecture? Harness your inner zen, and gently slice away, one fruit at a time. Feeling chaotic and self-destructive after a messy breakup? Repeatedly swipe back and forth, taking out whatever comes your way. You do you, boo.

Verdict: Up to five years jail for “recklessly or knowingly endangering or harming the lives and health of members of the public” under the Food Act 2014

This, I found infuriating. Why is there a whole game centred on butchering classical piano pieces, playing them in a tempo they were never meant to be played? Why did the developers think inane pseudo-motivational messages like “Get revived! Get higher!” would encourage people to keep playing? Why could they not put slightly more effort into making this game NOT look like it was made in an Excel spreadsheet?

Gameplay is pretty straightforward: tap the coloured tiles. Even a five year old could do it, which is why it was so frustrating that I couldn’t. Everything about this game screams easy, boring, and meh. But 45 minutes later, I was staring at my phone sweating and wild-eyed, wondering why I couldn’t get more than halfway through “Happy Birthday to You”. This game can single-handedly undo every motivational speech you have ever internalised. Beware.

Verdict: Compulsory psychiatric assessment and treatment under the Mental Health (Compulsory Assessment and Treatment) Act 1992, when this game inevitably wrecks your spirit

Let me get one thing straight: 2048 can only be considered a maths game in the same way that FakeTaxi can be considered an urban transportation company. This game will not help you academically unless you didn’t graduate from primary school. Nevertheless, it is still simple, utterly wholesome and super enjoyable. It’s easy enough to blow through the first stages, it but steadily and imperceptibly ramps up. As a 12 year old, I enjoyed this way more than any healthy, normally-developing adolescent child should have. Nothing has changed since then.

Pro-tip: Find the OG app, “2048 by Gabriele Cirulli”. Gabriele, like a true GC, committed to make his game freely available, open-source and refused to monetise it. Swathes of developers proceeded to copy the original code and load their apps full of ads and nasty trackers and glitch bugs, which goes to show that when you do nice things, someone else will inevitably shit all over it.

Verdict: False and misleading representation under the Fair Trading Act 1986, for, convincing millions into thinking this was a legit study aid