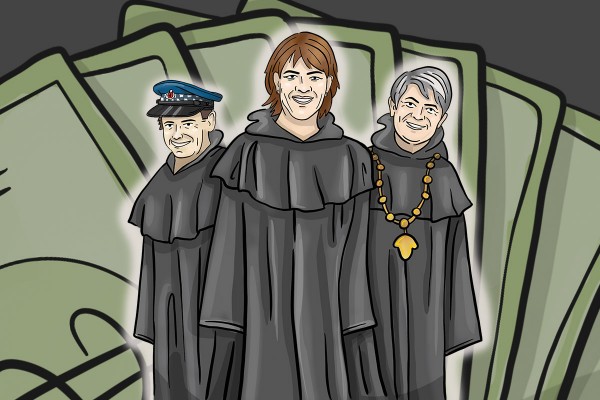 The Committee: A Tale of Cash, Cocktails, and Conspiracy

It’s August 2018. You’re in Year 13. You’re covered in pimples, you don’t know how to blowdry your hair, and your fashion sense is what can only be described as preppy-grunge. Your on-and-off high school girlfriend has just broken up with you because you had a Skype call with another girl. Zoom is just a thing that Sonic does when he goes fast.

You’re in Dunedin for a tour of Otago Uni with your family, even though you don’t want to think about Uni. You don’t know what you want to do with your life but you’re excited to wear your leavers hoodie for an embarrassingly long period of time after you graduate at the end of the year.

On your way to meet up with your family to visit Otago Museum, you pass Mellor Laboratories, in its final days of construction. It looks like something from a sci-fi universe, except for one concrete wall, crumbling from years of neglect. Beneath it is a corridor leading into the ground. Thinking you’ll stumble upon a circle of tradies having their smoko, you follow the tunnel. Instead, it leads to a grand iron door with a digital door lock. For the meme, you punch 6969 into the keypad and to your surprise the door swings open to reveal an enormous hall with a long meeting table in the centre.

At the head of the table sit distinguished old men and women adorned in university robes. You recognise Vice-Chancellor Harlene Hayne, and sitting beside her, her alter ego Charlene Chainz. They look identical, except Charlene slouches low in her seat wearing a durag and gold chains. Also seated at the table are police officers, city councillors, and men in suits, with have larger, musclier men in suits and speed-dealer sunnies standing in the shadows behind them.

Maps, diagrams, documents, and photos are scattered across the table. One diagram shows George Street covered in coloured dots and details about a lab in Wuhan. Another has a map of Coastal East Otago with ‘Evil Lead Poisoning 2021 Plan (Revised Edition)’ stamped on it in bold red letters.

The boomers on Dunedin News are right. They’ve always been right, you realise with a gasp. Your eyes are now wide open.

The apparent leader of this sinister cabal approaches you, gives you a large envelope, and tells you to take it in exchange for never speaking of what you just saw ever again, or else. You peek inside and see a fat wad of cash and a gold and blue ring. You’re scared shitless at this point and so you nod your head and scamper outside, trying to process what you just saw. As you catch your breath at the bottom of the tunnel, you overhear voices from back inside the creepy assembly room.

“Oh shit. It was still in the envelope.”

“Find the boy. Unless he manages to dump $20,000 in a day it can’t be hard to find a scrawny kid with a wad of cash. Get the ring back. Whatever it takes. The Committee depends on it.”

You hurry away, slowly realising the enormity of what has just happened. You’re stuck with 20 grand in cash and a creepy ring. If you keep it, The Committee will hunt you down and probably throw you into the Leith. “You’ll be sleeping with the fishes,” mutters Charlene Chainz in your imagination. You shudder.

If you give the cash away to someone, you risk roping them into this mess. You’re going to have to get rid of it without a trace, ASAP. No expensive jewelry, designer drugs, or a truckload of goon. You don’t know what you’re going to do, but you’re sure as shit not showing up to the family museum tour.

When thinking of ways to burn through a lot of cash quickly, arcades are the first thing that comes to mind. As a high schooler, you want nothing more than a Timezone in the Meridian Mall. One with Mario Kart, DDR, and maybe even bumper cars. Alas it’s 2018, and you can only dream of such luxury. Megazone is your only option, so you head there. You head straight for the games without giving laser-tag a second thought. Speedrunning a game of minigolf takes you about 15 minutes and only burns through $9. Then you head to space invaders, burning through $60 in about half an hour.

You give the basketball game a try because you suck at shooting hoops, but as you pay for your second game a tall, handsome, dark-haired guy walks up and asks to join. Flustered at his smile, you stammer out a “yeah sure”. You struggle to keep your eyes off his shitty band t-shirt even as he wins your game with more than double your score.

“Again?” he asks, as your eyes meet his and he reaches over to pay for the next game for both of you.

This could work, you think to yourself. We could run off to Mexico together. We could get married in a little chapel on the beach and sunbathe on the sand together. He doesn’t need to know about The Committee. Shit. The Committee. No, you can’t bring him into this.

You run out of MegaZone and into the street, only $80 dollars poorer. You could go to the Dunedin Casino, but you’re only 18 and you feel like with your luck, you’d end up with more money than you started with anyways.

Your next best idea is to repeatedly go down the Moana Pool hydro-slide. You think it will cost every time you go down the slide, but upon arrival you realise you only have to pay once for the full swim and slide experience, unless of course you go down the slide, sprint outside the pool, cut off your wristband, and re-enter. So that’s what you do. Pretending you’re not a student, you pay the full $12.50 entry fee, strip to your underwear, sprint up the tower, slide down, then run outside and pay again. The slide itself only takes 50 seconds to travel down, but the extra steps add another 5 minutes every time. Furthermore, you only last five slides before the lifeguard bans you for running near the pool, not wearing proper swimming attire, and just generally freaking everybody else out. You walk out of Moana Pool, 30 minutes and $62.50 later.

Thinking back to why you came to Dunedin gives you more inspiration. Lecture theatres can be rented out at a steep price, even just to watch Netflix, and this is exactly what you need. You hire Castle Two at $590 for a session. Despite the session lasting more than a few hours, you only have time for one 24 minute episode of Garth Marenghi’s Darkplace on the big screen. The day is turning to evening and you still have $19200 to yeet, so at this point there’s one real solution. Get shitfaced.

You quite like the idea of buying the most expensive drinks at the bougiest bars, and given what you’ve burnt through on a night out before it can’t be hard to get rid of even more when you’re actually trying to. At Pequeño, you sit on the fancy leather couch and down five $19 martinis one after another like a tragic James Bond. You also order a couple of even fancier cocktails and down those, before leaving for the next bar on this upmarket pub crawl you’ve embarked upon. You visit Carousel followed by Zanzibar and get kicked out of each for the state you’re in, but not before downing half-a-dozen cocktails of the most top-shelf liquor they had in stock.

Absolutely trolleyed, stumbling down George Street at 10.30pm, and still holding onto about $18700, there’s one last thing you can think of to try and spend this money. Heading to AskOtago, you demand to enrol in study for 2019. Somehow you make yourself clear through slurred sentences and they oblige. After some discussion, you enrol in a Bachelor of Science and just to make sure that money really goes to waste, you add a MFCO minor onto it. When you ask to pay upfront in cash however, you’re reminded about the fees free first year that’s just been implemented. Dammit Jacinda.

It’s time to do what you should have done in the first place. You break into a Castle St flat, steal a couch, stuff the wad of cash into an old couch cushion, and set the whole thing on fire in the street. You return to your parents drunk and scared, but at least you’ve gotten rid of the cash. You feel your pockets to double check there’s no change lying around and find the ring is still there. You decide to keep it. After all, it can’t be that important right?

You have fewer pimples, better style, and you’ve spent a lot more than $20 grand on your time at uni. Your MFCO minor arguably got you somewhere and you’re writing for Critic Te Arohi. You’ve suppressed the memories of the events three years prior and the envelope is still locked away in your desk drawer. You are writing a feature on student drinking culture and harm reduction when you get an email from Vice-Chancellor Harlene Hayne. She tells you that she knows who you are, and asks you to meet later today.

In a dark room beneath the clocktower, she explains that the money The Committee gave to you three years ago was intended to be used to find a replacement Vice-Chancellor when Harlene left. The ring should be held by the heir to the Vice-Chancellorship. It holds the power of The Committee, she tells you. The Committee thought they’d lost the ring for good, until your familiar face started showing up in Critic recently.

The Vice-Chancellor begs you to give up the ring and offers to pay off all of your student debt, and provide a lifetime's supply of craft beer and fancy cocktails.

You refuse. You walk out of the dimly lit room knowing you have to destroy the ring at all costs and strip The Committee of its grasp on power.

With another gasoline-soaked couch next to you and a lighter in one hand, you open the envelope ready to cast the ring into the fire and destroy it. The Dunedin sun reflects off the ring as you pull it out of the envelope. It shimmers in the light, emanating a glow that you can’t help but be transfixed by.

In a moment of egomania, you slip the ring on your finger and feel the power surge through your hand and arm to your chest. After all, why not? Why shouldn’t you keep it?

You are the Vice Chancellor of Otago University now, and you have The Committee in the palm of your hand. You let out an evil laugh and look up to the sky.