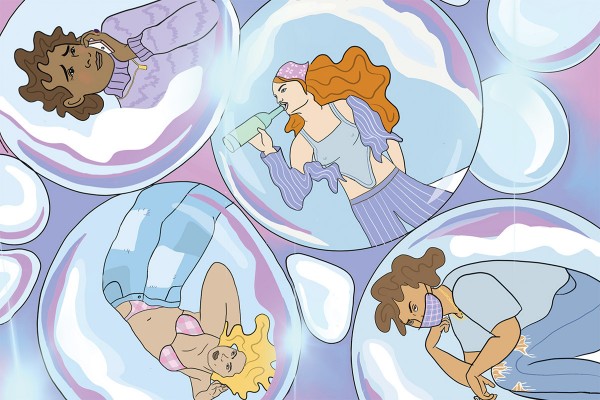 Locked In: what happened when RAs were locked down in residential colleges

Lockdown exposed problems with residential colleges. Residential assistants (RAs, this year known as Sub-wardens) had heavy expectations placed on them. Whether it was managing first years’ mental health or fighting for fair pay, lockdown placed a spotlight on conditions of work in residential colleges that have been ignored for too long.

In early 2020, concern about Covid-19 spread across the University, with students and staff wondering how colleges would operate when a lockdown was inevitably announced. Lydia, who worked as an RA at one of the University-owned colleges, said that when Covid-19 began to take hold in New Zealand, the “college had information that things were happening, but we weren’t sure what it was”. When the news of lockdown finally arrived, she was “waiting for it to happen” and “concerned with how it would work with classes for me, and the first years who hadn’t experienced [university] before”.

Talitha and Liam, who were RAs at one of the private, non-University owned colleges, said that the lockdown announcement sent students and staff into a frenzy. The first thing the students and RAs were told by college management was “go home if you can.”

Liam felt as though from the very start this was terribly poor management. “It sent hysteria through the hall. People were terrified. They were sitting in the dining room bawling their eyes out, this had never happened before,” he said. “I didn’t feel like the planning was there, and it was so unorganised. We had over 100 people in a college and we were trying to plan bubbles of five with limited amounts of toilets, showers, and dining spaces.”

The constantly rising alert levels and constant stream of news meant that everything was happening quickly. “The news would come out, then an hour later we were called into a meeting to discuss a plan of actions,” Talitha said. The lockdown announcement “freaked people out about finding flights home” and “students were asking me if the University was doing anything about helping people get home,” she said. She didn’t have the answers to those questions.

Jamie Gilbertson, the Senior Warden of all Colleges, said that he began wondering what Covid-19 would look like in New Zealand when the pandemic started to bubble up on the news. “When we saw things on TV that were happening overseas, we all started thinking: ‘what if?’ As soon as we got back to work in January, the University started actively preparing,” he said.

Many first years made the decision to go home. For Lydia, this meant there were only 60 residents left in her college. The remaining students were organised into smaller bubbles out of caution. “We got them to organise their own groups which meant they ate together, all of their social interaction was in that group, and they moved rooms so they were on the same floor.” Lydia said that although the first years would be interacting, it was harder to form a deeper connection with students due to having to remain socially distanced. “The ability to mix groups and meet different types of people was limited.”

Andy Walne, the Master of University College, said that the colleges acted on the advice of the Ministry of Health when it came to adhering to level 3 and level 4 restrictions. “A college was one bubble, but then within that we separated students into groups of four to six. Each bubble had their own dining area or bathrooms where that was feasible to do so and maintain social distancing within the college,” he said.

As lockdown progressed, Liam described how it was difficult for RAs to ensure that first year students were still getting the services they were paying for, despite the circumstances. “People pay so much to go to a college, how do we maintain that service while there is a global pandemic?” he wondered. Talitha said that the experience of the first years was drastically different to what previous students had experienced. “The alert levels and online classes, with no experience of being in a lecture theatre, or going to rugby games, experiencing what we would have known. It’s really tough, I feel for them,” she said.

The RAs who stayed in their colleges were expected to maintain a relationship with students who had left through online methods. “We still had to manage all of our students through social distancing and the ones who were away at home, we had to be talking to them regularly. It was difficult and time consuming just to be able to connect with these people all around the country. We had to write reports on students that had gone home every two weeks. We had more team meetings, and more phone calls,” Liam said.  “I had a few overseas students, so finding ways to communicate with them in a different time zone was difficult. People would talk about their home or financial situation, and that was difficult.”

Problems arose when the colleges announced a policy that RAs would be paid the same, regardless of whether they stayed at the college or went home. “There was a level of dislike for the policy of ‘you get paid the same if you go home.’ There were cases of RAs staying and then leaving after this decision was made. There was a bit of ‘we’re doing all the work, but they’re getting paid the same,’” Lydia said.

Liam said his role became more time intensive at the college due to having to enforce rules, as well as online support. Lydia worked longer hours too. Liam said that the (non-University owned) college never accounted for the amount of extra time that the RAs were working. “We were working way over 20 hours and still being expected to pay the same amount for our hall per week,” he said.

“For the first week of lockdown we didn’t have any other staff coming in, some of us were doing admin work, even security and maintenance. We were given ten minute slots to talk to residents, but I would spend time on the phone with them making sure they were okay,” said Talitha. With added responsibility, came more hours which ended up being questioned by management. “When we were writing down how many hours we were doing, we got questioned and started keeping log time sheets. For a lot of us, it came out we were spending a lot more time communicating with these residents then the staff thought we were.”

The RAs at Talitha’s college did get an extra Covid payment, but “that was after [a] back and forth of them not wanting to give it to us,” she said.

In regards to the University owned colleges, Jamie Gilbertson said that every college's response to Covid-19 was different. “People had to make a decision whether to stay or go which took a little bit of time, and we helped with that as best we could. It was difficult for everybody,” he said. In terms of changes to RA roles, Jamie said that “all the concepts of pastoral care continued, but the niche was in a national pandemic, so the context changed.”

Liam thinks that the lack of pay, draining conditions and excessive hours exposed the inequities which still exist for RAs, especially those in privately owned, affiliate colleges. “I think it’s totally fucked that we pay around 17k a year for a service which we don’t fully receive. There is no pastoral care or academic support offered to RAs. I found it tone deaf that the University was implementing these payments and recognising the extra work Sub-warden’s had done, but affiliate colleges weren’t implementing it. It’s unfair,” said Liam.

Liam said that the privately owned colleges were on the defensive when it came to questions about pay and fair conditions. “This is a business to them, this is profit to them. It should be a public good — not to profit off young students or their parents,” he said.

Liam quickly became fed up with the lack of action, and decided to take matters into his own hands. He started a union for RAs, making submissions to the college board about the unfair treatment he and his co-workers faced in comparison to other colleges.

“There wasn’t [any extra support,] and nothing that we didn’t fight for. I don’t know why we expected something, Covid didn’t stop the terrible things that happen in colleges, it made it intensify. We were never pulled up and asked ‘what’s your situation?’ There was no talk around our financial or family situations,” he said.

Jamie was optimistic about what RAs got from the lockdown. “You can’t get this from a training course, how to manage a community in a pandemic. We really value RAs. They are our front line, they got a unique experience. It was remarkable when I look back on it,” he said. “We didn’t ask for it and we didn’t expect it, but we went on a journey that proved to be interesting and the community spirit shone through.”

Andy thinks that if another lockdown were to occur, all colleges are prepared and have fine-tuned their policies. “We’ve got a better idea of what's coming, we’d be able to give them more confidence from the start as we would know what’s coming.”

The former RAs said there is a long way to go when it comes to equity and sufficient support for RAs. But they would still encourage others to give the job a go. “If you have the heart for it and you care for young people, then do it. It’s unpredictable, anything can happen. Just because Covid is there, it shouldn’t prevent you from doing anything you want to,” said Talitha.

“Heaps of people I know have gone back again,” said Liam “but it isn’t tinted with rose coloured glasses anymore.” He doesn’t think things will change in residential colleges until a law change requires better support for students and RAs.